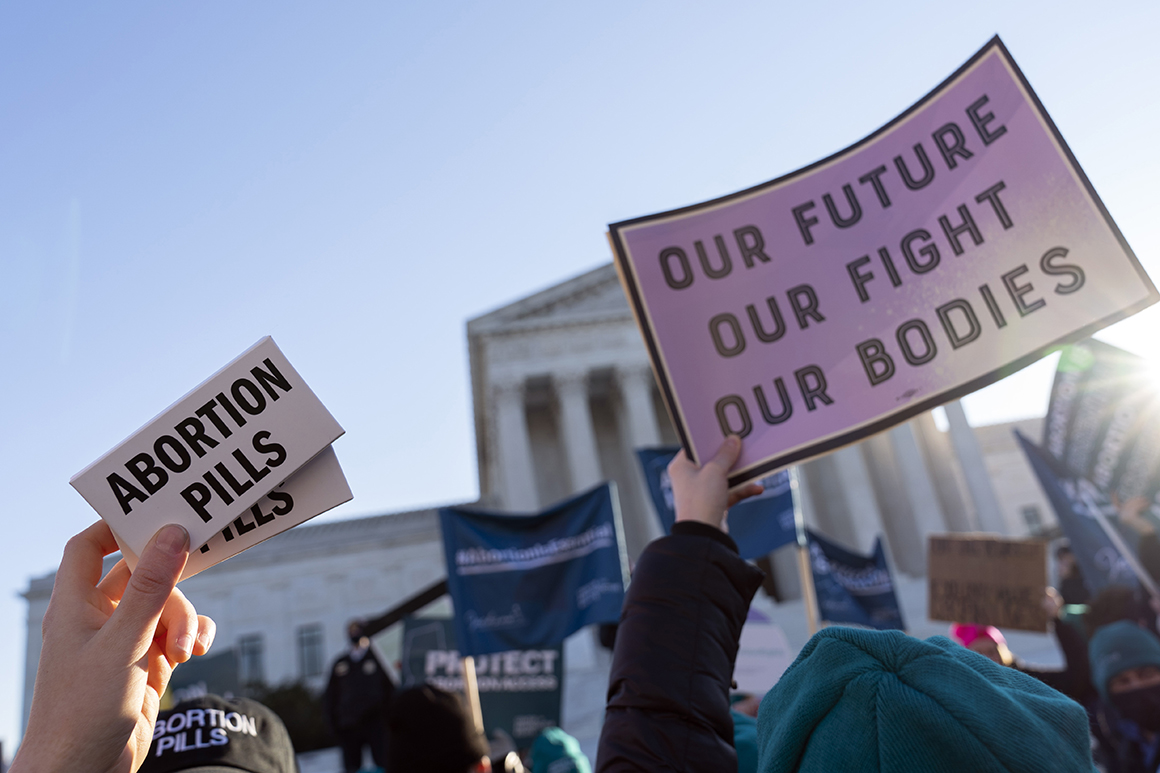 As the Supreme Court weighs the fate of Roe v. Wade, the Food and Drug Administration is set to open a new phase in the abortion wars this week, when it issues a key decision on how doctors can dispense pills to end an early pregnancy.

Regulators are due to decide Thursday whether to uphold, revise or scrap longstanding restrictions on the abortion drug mifepristone — a review triggered by the American Civil Liberties Union challenging the rules in court. Loosening the rules, which have already been suspended due to the pandemic, would allow any doctor to prescribe the drugs online and send them by mail, allowing patients to terminate a pregnancy at home even if justices strike down or cut back Roe v. Wade.

“We are quite hopeful, because the science overwhelmingly supports lifting the restrictions,” said Lorie Chaiten, an attorney working on the ACLU’s case against the rules.

The stakes around the FDA’s decision have grown as justices consider Mississippi’s 15-week abortion ban and revisit the basic framework of Roe v. Wade, including whether states may ban abortion prior to the point of fetal viability, which occurs around 24 weeks of pregnancy.

While making the pills widely available could give patients a workaround should the high court uphold the Mississippi law, it wouldn’t guarantee access to at-home abortions to everyone who wants it. First, the pills can only be used in the U.S. during the first 10 weeks of a pregnancy — meaning that by the time many people discover they are pregnant and figure out how to obtain them, it could already be too late.

Second, a wave of red states has moved over the last few years to restrict access to the pills, action that picked up considerably earlier this year when the FDA signaled it might loosen the federal guidelines. Texas became the latest, implementing a ban on mail delivery and online prescribing of abortion pills just days before the Supreme Court left the state’s more sweeping ban on all forms of abortion after six weeks of pregnancy in place. The anti-abortion movement is now pouring energy and resources into pushing state legislatures and Congress to outlaw or restrict the pills, calling it one of their top priorities.

“It’s clear that reckless change is in the works,” said Kristan Hawkins, president of the group Students for Life of America, about the impending FDA decision. “We need to bring an end to chemical abortion.” Her group is currently lobbying for limits on the pills and other abortion methods in more than 30 states.

It’s unclear whether such state bans unconstitutionally preempt federal law by denying people access to medication the FDA deems safe and effective, said Patti Zettler, a professor specializing in FDA law at Ohio State University. What’s certain is years of legal battles to come. And abortion rights groups say even if the bans are eventually struck down, they are already deterring people from accessing the pills.

As federal courts become increasingly hostile to abortion rights and Congress lacks the votes to either tighten restrictions on the pills or make them more easily accessible, the hopes of the abortion rights movement have turned to the executive branch. But underground providers and activist groups aren’t waiting for the FDA. They are moving on their own to dispense pills, and making plans for a post-Roe America.

“We’re set up to do whatever’s necessary,” said Rebecca Gomperts, the founder of Aid Access, an international organization that prescribes and mails mifepristone to people in all 50 states.

It’s a fight that has been simmering for decades, ever since the FDA first approved mifepristone during the Clinton administration, along with a requirement that the pills be physically handed out by a doctor.

Now, groups such as the American College of Obstetricians and Gynecologists are pushing the FDA to allow online prescribing and mail delivery, citing studies from around the world showing the pills are equally safe no matter how they get to the patient.

That fight is taking on more urgency as people on all sides of the abortion fight are anticipating a major rollback next year of longstanding precedents protecting the right to terminate a pregnancy. That’s put more of an emphasis on the pills — and who can access them.

Already, more than a dozen Republican-led states have restrictions on the books, and at least 16 others have introduced bills to limit how the drugs are distributed, according to the Guttmacher Institute. These battles are likely to heat up in just a few weeks when legislatures return to start their new sessions.

Conservatives are also investing millions to elect candidates in the 2022 midterms who favor such restrictions. And they’re putting the FDA on notice.

During Tuesday’s confirmation hearing for Robert Califf, President Joe Biden’s nominee to lead the FDA, Sen. Roger Marshall (R-Kan.) pressed him to make sure the drugs are “not handed out like candy” going forward.

Califf said that while he isn’t personally involved in the review of the rules, he’s confident in the regulators.

“The FDA has to make this decision based on the latest data and the scientific principles,” he said. “I do trust the FDA staff to make good decisions.”

Students for Life also filed a Freedom of Information request on Tuesday demanding communications between the agency, Planned Parenthood and other abortion providers regarding the rules for the pills, while the anti-abortion powerhouse Susan B. Anthony List urged lawmakers to deny Califf the post over his past support for the drug — a potential threat to his candidacy given that GOP votes will be necessary to secure his confirmation.

“If confirmed, Califf will work hand-in-hand with Joe Biden, Xavier Becerra, and the radical abortion lobby to make every mailbox, post office and pharmacy in America function as an abortion center,” warned SBA List President Marjorie Dannenfelser in a statement Tuesday.

Abortion rights supporters, meanwhile, are strategizing on how to get the pills to people who want them no matter what state bans are enacted.

“If and when the Supreme Court ruling on Roe comes down, we need to make sure folks know that there is a place they can get these medications,” activist Kristin Mink with the Center for Popular Democracy Action told POLITICO. “Even in places where it’s legal, people don’t know it’s legal and people are afraid to make use of it.”

On the morning that the Supreme Court heard arguments on Roe, Mink and other women stood on the steps outside the courthouse, unfurled a banner reading “We are taking abortion pills forever,” and swallowed what they said were the actual drugs while a crowd around them cheered.

While they said they were not pregnant, meaning the hormone-blocking pills could have only triggered minor side effects, the action was meant to make more people aware of the pills’ availability and chip away at the fear and stigma surrounding the 20-year-old medication.

Domestic and international online distributors of the pills are now working with activist groups like Mink’s to make sure people know where they can order the pills and how to use them. They’re piloting a program to prescribe and mail people pills before they become pregnant — offering people in states likely to impose new bans access ahead of any restrictive laws.

“Why not have what you need on hand?” asked Elisa Wells, co-founder of Plan C, a website providing information about access to mifepristone.

State restrictions on the pills may prove impossible to enforce given that the drugs are already being shipped from overseas providers difficult to prosecute and are arriving at private homes in discreet packaging, or handed out through personal networks. But abortion rights advocates say such bans and the fear of prosecution — particularly if more states adopt Texas-style laws encouraging regular citizens to sue one another over suspected illegal abortions — could scare people away from ordering the pills.

“Somebody in California might want to mail their friend in Texas an abortion pill, and I’m not sure how the state would ever know,” said Abigail Aiken, a professor at the University of Texas at Austin who studies the use of medication abortion. “But the idea you could get in trouble with the law would create a chilling effect.”

And while recent studies, looking at thousands of patients, found serious complications occur in less than 1 percent of cases, advocates say the bans could deter the few people who do need follow-up medical care from seeking it out.

“We’re letting folks know, if you do this and you do have to go to the hospital, here is what language you should use so you aren’t criminalized,” said Michelle Colón, the executive director of the Mississippi-based group SHERO, which stands for Sisters Helping Every Woman Rise and Organize. “But whatever happens, we won’t go back to the pre-Roe days of back alley abortions, because people can order the medications online.”