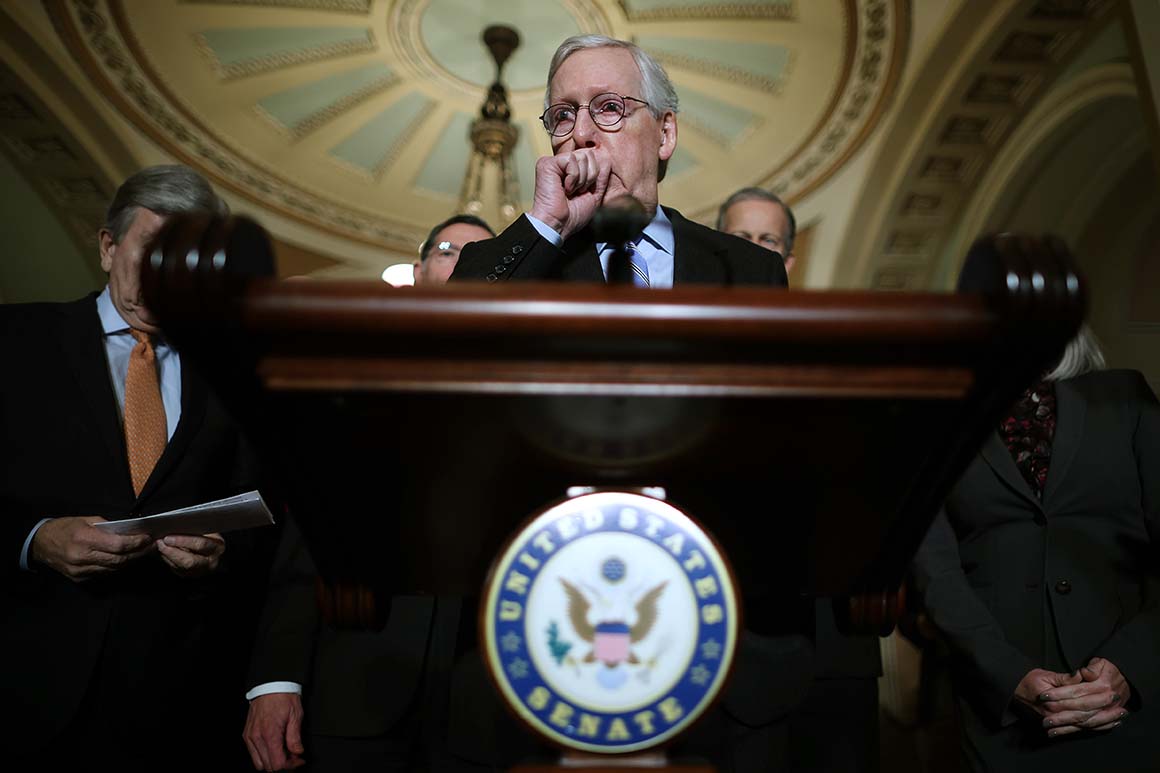 Mitch McConnell is on the verge of selling a skeptical Senate Republican Conference on a path toward allowing Democrats to more easily raise the debt ceiling, a critical development as the country faces a mid-December debt cliff.

At a party leadership meeting on Tuesday, McConnell pitched his lieutenants on a convoluted strategy that would require at least 10 Republicans to approve legislation that would later allow Senate Democrats to raise the debt ceiling by a simple majority vote. Though Republicans would still be facilitating an easier debt ceiling increase for Democrats by carving out an exception to the Senate’s supermajority requirement, it’s increasingly likely enough Republicans view it as the least-bad scenario.

Take Sen. John Cornyn (R-Texas). He rebuffed efforts Monday to tie a debt ceiling increase to the annual defense bill, but he can live with a separate effort that — once it breaks a GOP filibuster — would allow Democrats to raise the debt ceiling without any GOP help.

The legislation released by House leaders, the product of weeks of conversations between McConnell and Senate Majority Leader Chuck Schumer, would suspend filibuster rules for a debt ceiling increase for about a month. But it would require Democrats to raise the debt ceiling to a specific number rather than suspend it for a length of time, such as through the election.

Republicans can tout that as a key concession, while Democrats successfully rebuffed Republicans’ efforts to force them to use the more cumbersome budget reconciliation process to raise the debt ceiling. The debt increase would likely range from $1.5 trillion to $2 trillion to ensure Congress won’t have to address the debt again before November midterms, according to several people familiar with the matter.

It’s a stunning turnaround for McConnell, who made blanket opposition to Democrats’ increasing the debt ceiling a central pillar of his political strategy this summer. On Tuesday, McConnell argued to his leadership team that it’s a one-time process and that forcing Democrats to own that number makes the proposal worth supporting, according to an attendee.

“It does achieve a specific number and it’s what you could do with reconciliation if you didn’t have any amendments allowed. So, we’ll see what the members say. I would expect they would be for it,” Blunt said.

Blunt was among 11 Republicans who voted to break a filibuster on raising the debt ceiling in October, an internal debacle for McConnell, who had spent weeks insisting Democrats raise the debt limit via the budget reconciliation process. McConnell is trying to avoid a sequel to that episode, although Republicans will still have to grease the skids for Democrats.

It’s a critical moment for the GOP leader, who comes under incessant attack from former President Donald Trump for his maneuvering as minority leader in the 50-50 Senate. His members panned tying a debt ceiling increase to the National Defense Authorization Act, and some aren’t ready to go along with his latest play.

Democrats “control the agenda in the Senate. There’s no reason for us to try and facilitate anything for them again,” said Sen. Mike Rounds (R-S.D.), who helped break the October filibuster. “I can be pretty pragmatic. But this one?”

“I like them having to use the reconciliation process. And to the degree we could help facilitate that a little easier, I’m fine with,” said Sen. Kevin Cramer (R-N.D.). “I’m a little less enthused about” the other fast-track options.

House Democratic leaders on Tuesday released a compromise National Defense Authorization Act as well as a separate piece of legislation that allows for the filibuster-free debt limit vote. The latter will also include a measure to avoid as much as $14 billion in cuts to Medicare payments next year, triggered in part by the budget reconciliation process used to pass Biden’s $1.9 trillion pandemic aid package in March.

House Democrats will tee up action on those separately, leaving it up to the Senate to overcome a filibuster to pass both measures. The House would still need to also pass the debt limit increase later this week.

If successful, the Senate would then still have to vote to address the debt limit, but the process would make an exception to Senate rules so Democrats would only need 51 votes to do so. Schumer reported “good progress” in their talks on Tuesday morning and continued sounding a different note than he did in October, when he and McConnell went to war daily over the debt limit.

“I’m optimistic that we will be able to prevent the awful prospect of the U.S. defaulting,” Schumer said. “I continue to thank all of my colleagues for cooperating in good faith.”

House leaders hoped to vote as soon as Tuesday evening on both the defense bill and the debt limit process. If so, members would likely be voting late into the evening.

Further complicating matters, several House members traveled to Florida on Tuesday for late Rep. Carrie Meek’s funeral, and members of the Armed Services panel were still finalizing text of the defense bill at the same time. Regardless, the House hopes to wrap its work Wednesday in preparation for services to honor former Sen. Bob Dole starting Thursday. Dole, who died Sunday, will lie in state in the Capitol rotunda later this week.

This is technically the last week the House is scheduled to be in session until mid-January, although Speaker Nancy Pelosi has warned members they could return at some point over the holidays if the Senate passes Democrats’ $1.7 trillion social and climate policy bill by then.

Marianne LeVine and Caitlin Emma contributed to this report.