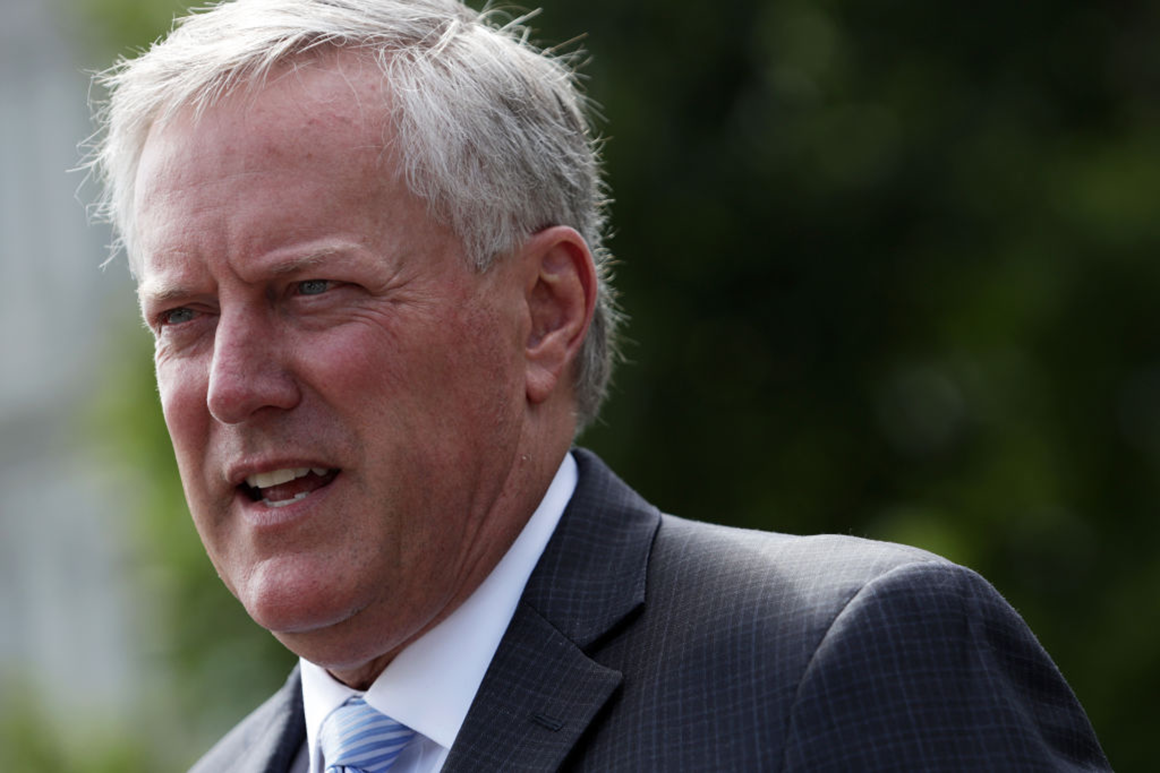 Mark Meadows and the National Archives are in talks over potential records he did “not properly” turn over from his personal phone and email account, the presidential record-keeping agency confirmed Thursday.

“NARA is working with counsel to Mark Meadows to obtain any Presidential records that were not properly copied or forwarded into his official account,” a NARA spokesperson said in a statement to POLITICO.

A source close to former President Donald Trump’s ex-chief of staff confirmed that Meadows is working with the National Archives to turn over any documents that he was supposed to provide upon the end of Trump’s term.

“Not worried about it at all,” the source said, speaking candidly on condition of anonymity. “All necessary and appropriate steps either were or are being taken.”

The National Archives’ acknowledgment comes as Meadows clashes with the Jan. 6 committee, which is seeking information about his knowledge of Trump’s effort to subvert the 2020 election. Committee members have raised questions about whether Meadows properly turned over all of his records before leaving office. Meadows sued the select panel, its members and Speaker Nancy Pelosi on Wednesday over efforts to force him to comply with the investigation.

The select committee declined to comment on the NARA development.

Meadows, in recent legal filings, indicated he shared 6,800 pages of emails and more than 2,300 text messages with the Jan. 6 committee in an initial bid to cooperate. But members of the committee raised alarms about Meadows’ claim that some of his private records were shielded by executive privilege. If that’s the case, they said, those records should likely have been turned over to the National Archives as part of official government business.

Many of the documents Meadows did provide, Jan. 6 panel members added, clearly belonged to the National Archives.

“Mr. Meadows again, he’s turned over documents that are extremely important and relevant to the investigation that are not privileged,” panel vice chair Rep. Liz Cheney (R-Wyo.) said Wednesday evening in a brief interview. “And those texts and emails from his private email account, his personal cell phone, those belong in the National Archives and so the committee is also very interested in questioning him about that.”

Under a federal law passed in 2014, White House personnel may use their personal devices or email accounts for official business, but are required to forward those “electronic messaging” records into an official account within 20 days of their creation.

Employees who “intentionally” fail to do so can face disciplinary action or criminal prosecution, according to a policy issued by Trump’s White House counsel’s office in 2017. The policy said White House personnel were required to use official email and electronic messaging accounts for work-related communications, except in “emergency circumstances.”

Trump and Meadows, like many Republicans, condemned former Secretary of State Hillary Clinton for her use of a private email server to conduct official communications — a flap that hurt Clinton in her 2016 campaign against Trump.

The Jan. 6 committee is currently engaged in a legal battle against Trump, who is trying to block the National Archives from sharing thousands of sensitive White House records that pertain to his attempt to overturn the 2020 election. Those records include memos, notes and files originally kept on Meadows’ government devices.

Complicating matters further is Meadows’ lawsuit against the Jan. 6 committee after a breakdown in negotiations for his voluntary cooperation. The panel is preparing to hold Meadows in criminal contempt of Congress next week for refusing to appear for a deposition about his knowledge of Trump’s effort to subvert the 2020 election.

In a series of recent statements, members of the select panel have suggested that Meadows may have violated the Presidential Records Act by failing to transfer official documents to the National Archives that he maintained on his personal cell phone and email accounts.