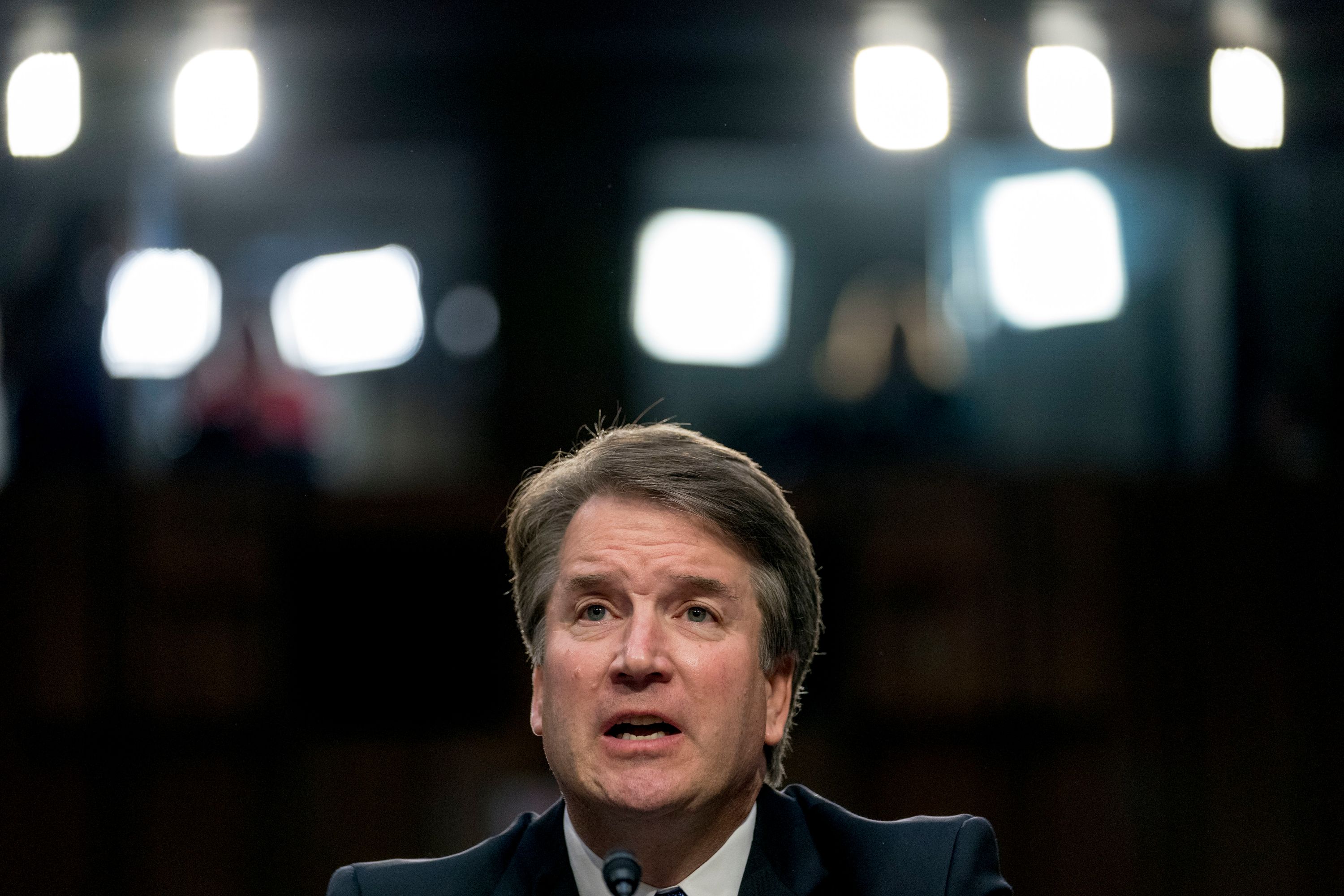 During Brett Kavanaugh’s 2018 Senate confirmation hearing for a seat on the U.S. Supreme Court, Sen. Dianne Feinstein asked the then-D.C. circuit judge whether Roe v. Wade “can be overturned.” “It is settled as precedent,” Kavanaugh responded, and “has been reaffirmed many times over the years, as you know.” He didn’t answer the question, but he seemed to affirm the lasting power of previous court decisions.

By the time the Supreme Court heard oral argument recently in Jackson Women’s Health Organization v. Dobbs, the Mississippi case that abortion rights supporters fear the newly conservative court will use to overturn Roe, Kavanaugh’s views on judicial respect for precedent appeared to have shifted. “If you think about some of the most important cases, the most consequential cases in this court’s history,” he said, “there’s a string of them where the cases overruled precedent.”

Although it’s true the court has indeed reversed itself on occasion, the practice is vanishingly rare. Kavanaugh listed a number of those cases—some of which, like Brown v. Board of Education and Miranda v. Arizona are familiar even to non-lawyers. But in his survey of court history, he neglected to point out a notable fact those cases have in common.

In those small number of overrulings, the court has almost always expanded constitutional rights, not constrained them. Indeed, the one case in which the court abrogated a right that it had previously recognized involved a ruling from 1905 that many scholars consider one of the worst decisions in the 232-year history of the court.

So far, some 59 Supreme Court cases expressly overruled prior decisions on constitutional grounds by votes of 5-4 or 6-3, the kind of narrow split that is most likely in the Dobbs case. Of those 59, only a handful arguably fall in the category of restricting—versus expanding—individual rights. None involved the kind of wholesale gutting of a recognized right of the kind that’s at stake in Dobbs. So any suggestion that overturning Roe would amount to a relatively commonplace move by the court is simply not borne out by the facts and is an evasive misreading of court history.

At an even more granular level, most of the cases in this subcategory involved the narrowing of the rights of criminal defendants during William Rehnquist’s time as chief justice, with a dominant 5-4 conservative bloc that included Justices Antonin Scalia, Clarence Thomas, Sandra Day O’Connor and Anthony Kennedy. Today’s Supreme Court right wing, which was constructed almost deliberately to create a majority capable of undoing Roe, seems far more ideologically minded. And that makes it potentially prone to more radical maneuvers such as altering the scope of the Constitution itself by erasing a constitutional right—and doing so without the labor and consensus required of voters seeking a formal amendment to the Constitution.

To be sure, conservative critics would argue that the right to abortion was built on a fiction in the first place, as nothing in the Constitution explicitly protects the right to privacy, let alone the right to terminate a pregnancy. But that argument falls apart when one considers that justices have identified so-called unenumerated rights within the 14th Amendment’s due process clause on a number of occasions, using them to block the government’s ability to dictate individual choices about marriage partners, intimate sexual contact, contraception and the rearing and education of one’s children.

To understand the significance of what it would mean to wipe a constitutional right off the books altogether, two concepts are foundational. The first is stare decisis, which is Latin for “to stand by things decided.” Although not in the actual Constitution, the court has historically abided by the assumption that, absent some special justification, its prior rulings stand. The goal of the doctrine is to foster stability and respect for the rule of law. The court has identified a grab bag of criteria in considering whether to abandon prior precedent, including whether the decision was well-reasoned or “egregiously wrong,” whether its replacement is workable and pragmatic, whether the facts on the ground have changed in the intervening years, whether the precedent conflicts with other Supreme Court rulings, and whether overruling it would injure individuals or organizations who relied on the decision, including society as a whole.

Most of these factors came up during the Dobbs argument, with Justice Elena Kagan emphasizing that the relevant facts about abortion haven’t changed much since 1972 when Roe became law. And nobody seemed to identify a workable justification for moving the abortion ban threshold back to 15 weeks’ gestation, as the Mississippi law does. The viability threshold of 24 weeks established in Planned Parenthood v. Casey, Roe’s important successor, has the advantage of making logical sense, as it hinges on the ability of the fetus to survive on its own. It’s not a concept that leaps from the language of the due process clause, mind you, but one that is measurable and identifiable, and thus relatively workable. Proponents of Roe also argue that the right to some abortion access has become woven into the fabric of American culture, with substantial majorities polled consistently favoring its survival.

Yet as Kavanaugh put it, “So the question on stare decisis is why, if … we think that the prior precedents are seriously wrong … why then doesn’t the history of this court’s practice with respect to those cases tell us that the right answer is actually a return to the position of neutrality and — and not stick with those precedents … ”

In questioning the sanctity of court precedent, Kavanaugh paid particular attention to a pair of early 20th century cases that offer the only evident example of the court deleting from its constitutional canon a previously identified right.

In a 1905 ruling in Lochner v. New York, the court recognized a constitutional right to contract and declared a New York state law capping bakers’ working hours unconstitutional. As in Roe, the Lochner court lodged the right to contract in the protections for “life, liberty, and property” in the 14th Amendment’s due process clause. Nearly 30 years later, however, the court took a much less laissez-faire approach in West Coast Hotel Co. v. Parrish by rejecting the notion that minimum wage laws are unconstitutional. Kavanaugh himself characterized West Coast Hotel as the case that “recognized the states’ authority to regulate business.” That decision, while favoring progressive labor reformers at the expense of wealthy business interests, didn’t expressly overrule Lochner.

Nevertheless, during oral argument in Dobbs, Kavanaugh cited West Coast Hotel as one among a number of cases that implicitly pave the way for overruling Roe. Over the years, conservative legal scholars have derided Lochner because, like Roe many years later, it recognized a right that is not expressly listed in the Constitution’s text. But while there have been no widespread protests to the gradual erosion of the right to contract granted in Lochner, the end of Roe would have a very different effect. It would disproportionately harm low-income women and people of color who already have less access than affluent families to good reproductive and maternal care, including abortion, possibly even increasing maternal mortality rates.

It is the magnitude of the effect of such a reversal that Kavanaugh’s argument glosses over so dangerously. The sleight-of-hand points to the second foundational concept at stake: what it means to recognize—or obliterate—a constitutional right in the first place.

Constitutional rights afford individuals real power and practical means to challenge government overreach. If government tries to intrude on a certain area of individual life—such as speech or religion or handgun ownership in the home or child-rearing decisions—by passing a restrictive law, then the individual holder of the right can go to court and try to get an order, that is, an injunction, directing government to stop. Sometimes the holder can get compensatory money damages from the government for its violation of that right, too.

For example, the Texas Legislature recently passed a law, S.B. 8, that bans abortions at approximately six weeks, in violation of the individual constitutional right recognized in Roe and Casey, which protects against government interference with that right until around 24 weeks’ gestation. Providers went to court to enforce the right, yet the conservative Supreme Court majority refused to halt the law pending resolution of that lawsuit—thereby greenlighting violations of Texans’ constitutional right to a greater level of reproductive autonomy in the interim. A splintered court recently ruled that the abortion providers’ lawsuit can move forward as to a narrow subset of defendants. But, astonishingly, only three justices—Stephen Breyer, Sonia Sotomayor and Kagan—signed on to Chief Justice John Roberts’ separate opinion stating the obvious: that the Texas law “is contrary to this Court’s decisions in Roe and Casey,” and thus had “the effect of denying the exercise of what we have held is a right protected under the Federal Constitution.”

Prior to Dobbs, litigation involving abortion revolved around the balancing of the right to privacy under Roe and the government’s countervailing interests in fetal life. This kind of balancing occurs all the time in constitutional law. A First Amendment right to freedom of speech and religion arguably protects the promulgation of abusive sexual imagery involving children as a protected form of expression. But courts and legislatures have recognized that such “speech” is outweighed by the government’s interest in protecting against the public dangers that flow from pornographic abuse of children. Likewise, Casey set up an “undue burden” metric to test the impact of a restrictive abortion law (say, spousal consent or hospital admitting privileges for providers) against the woman’s right. If Roe is outright overturned, the scale becomes completely lopsided, with nothing to counterbalance the state’s purported interests in regulating reproduction involving pregnancy.

No doubt Kavanaugh was correct to suggest that, had the court not overruled precedents like Plessy v. Ferguson, which for its part blessed racially “separate but equal” facilities, “the country would be a much different place.” If he and four other justices join together to overrule Roe come June 2022, this country will indeed look vastly different when it comes to the individual constitutional rights of women against government intrusion. And that movement would be backward rather than forward, a rejection of a hallmark of America’s constitutional jurisprudence and its societal strength.