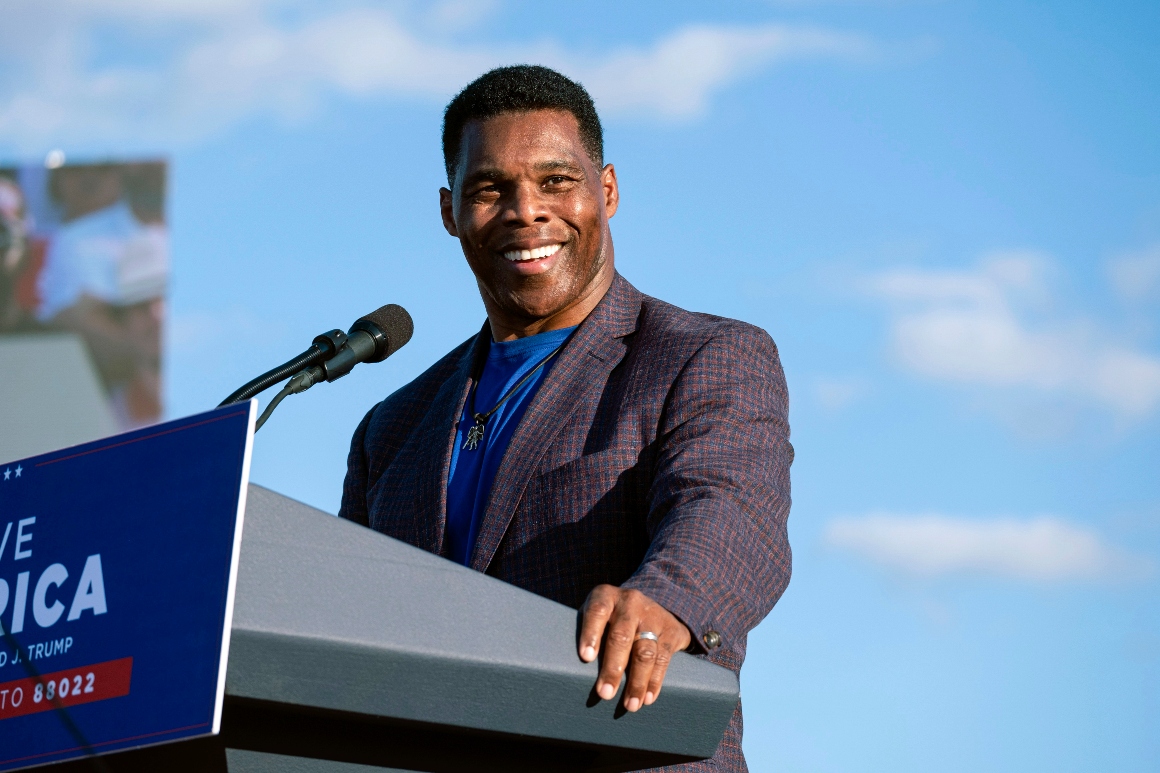 The most reliable springboard to the Senate used to be House experience — before Donald Trump vaulted from reality TV to the White House.

Five years after Trump went from celebrity to the presidency, some Republicans see his path as a blueprint for winning back the Senate. This campaign cycle, the GOP is coalescing around former football star Herschel Walker’s bid to turn Georgia red in 2022. Republicans are also signaling an openness to surgeon and TV host Mehmet Oz’s Senate campaign in Pennsylvania, another battleground state.

It’s a far less traditional approach than making the leap from the House to the Senate. And while both parties have seen celebrities run for office in the past, Senate Republicans acknowledged in interviews that there is a connection between Trump’s election and other boldfaced names deciding to run without legislative experience. What’s more, many are welcoming the development.

“Trump winning kind of showed, ‘Hey, anybody can do this,’” said Sen. Tommy Tuberville (R-Ala.), a former college football coach elected in 2020. “President Trump opened the doors for a lot of people. He’s not a lawyer. He hadn’t been in politics before. He’s an outsider. So that influenced my decision.”

“I started a trend, didn’t I?” Tuberville quipped.

Missouri’s Roy Blunt, the No. 4 Senate GOP leader, took the well-traveled route to the upper chamber — spending nearly a decade and a half in the House before moving up, with leadership credentials to boot. But Blunt said he’s not surprised that Trump’s background has inspired more celebrities to mull runs for office.

“The logical response to President Trump’s election would be people running who don’t have political experience but have wide recognition,” said Blunt, who is retiring next year. Two House Republicans are vying in the primary to replace him, but they’re currently trailing the state’s former governor and sitting attorney general.

Running as a household name certainly has its perks, particularly in a costly statewide race. Besides the obvious name recognition, they can raise money more easily — or tap their own personal fortunes to fund their campaigns — than their competition while claiming the “outsider” status often coveted in congressional runs. And with the wide reach of cable talk shows, already well-known candidates can communicate to voters fairly easily without paying for advertisements.

On the other hand, celebrity candidates can be unaccustomed to the intense vetting and media scrutiny that comes with running for office.

“I joke that the most expensive walk in Washington is from the House to the Senate,” said Sen. Lindsey Graham (R-S.C.), another onetime House member. “Celebrity gives you an instant attention, but it also has a downside. You have to prove that you’re more than a celebrity.”

Walker, for one, is facing questions about his marital history and academic credentials in the Georgia Senate race. Oz has to battle skepticism about his promotion of scientifically dubious remedies on his show, not to mention his Pennsylvania residency given his years living in New Jersey.

The celebrity doctor has emphasized that he grew up in the Philadelphia region, votes in the state and went to graduate school there. Oz has also defended his medical advice. He told a Senate panel that he has given the products he promotes to his family, but also said he recognized “that oftentimes they don’t have the scientific muster to present as fact.”

There’s also the stark knowledge gap that virtually any candidate who came to Congress through entertainment or sports would confront when it comes to writing legislation. Longtime lawmakers warn that the resulting erosion of policy prowess could lead to further partisanship in a chamber that’s already bitterly divided.

“My worry is that as you get more people here who have no experience in cutting a deal, it makes a place that’s already pretty dysfunctional even worse,” Murphy added.

That shift away from Hill deal-cutting practice could be dramatic in the next Congress: All five of the Senate Republicans who’ve announced their retirements next year are former House members, with collective decades of bipartisanship under their belts.

And the Senate GOP conference could see several new members with zero legislative experience. In addition to Oz and Walker, author J.D. Vance is mounting his own campaign in Ohio.

A spokesperson for Oz said in a statement that he has “spent his career empowering patients and audiences alike to change their lives for the better” and is “an outsider.” The spokesperson added that “it’s that outside the Beltway, people-first mentality that Dr. Oz champions and will make D.C. more accountable when he becomes the next Senator for Pennsylvania.”

Fame outside of politics “gets your foot in the door, that gets eyeballs on you, but you still got to perform,” said Rep. Tim Ryan (D-Ohio), the current frontrunner in his party’s primary to capture that Buckeye State Senate seat next year.

“Trump had that. He obviously was able to convince a large part of the country that he was the real deal,” said Ryan, who’s spent 18 years in the House. But he warned that “when the lights come on, you’ve got to be able to perform. People are gonna love you if you’re a celebrity, and it’s more romanticized. But then they take a good close look at you, and you’re gonna pass muster or not.”

Democrats have seen celebrity candidates on their side of the aisle, too.

And some Democratic candidates have achieved rock star status just by running repeatedly for higher office; former Rep. Beto O’Rourke recently launched a campaign for Texas governor after two consecutive unsuccessful bids for the White House and the Senate.

“It can be hard to go from a position where people like you and say kind things to you … and then when you become a candidate and your words get dissected and it actually matters … how you’re able to handle that is, I think, important ,” observed Sen. Lisa Murkowski (R-Alaska). “I’m not suggesting that a football star or a TV personality can’t do that, but I do think that sometimes it’s just harder for them.”

Walker and Oz’s candidacies, of course, don’t quite mean that celebrity will become a requirement for GOP Senate viability. GOP Reps. Vicky Hartzler and Billy Long are trying to replace Blunt in Missouri, while Rep. Ted Budd (R-N.C.) has Trump’s backing in the race to succeed retiring Sen. Richard Burr (R-N.C.). And first-term Republican Sens. Kevin Cramer of North Dakota, Marsha Blackburn of Tennessee and Roger Marshall of Kansas are all former House members.

Despite his own roots in the House, Cramer said he’s come to appreciate higher-profile Senate candidates for at least one reason: “Being elected to Congress isn’t the biggest thing that’s ever happened to them. And I think that’s sort of nice.”

“There’s no question that Donald Trump broke the mold,” Cramer added. “I don’t know that he’s the new mold, but he certainly broke the old one.”