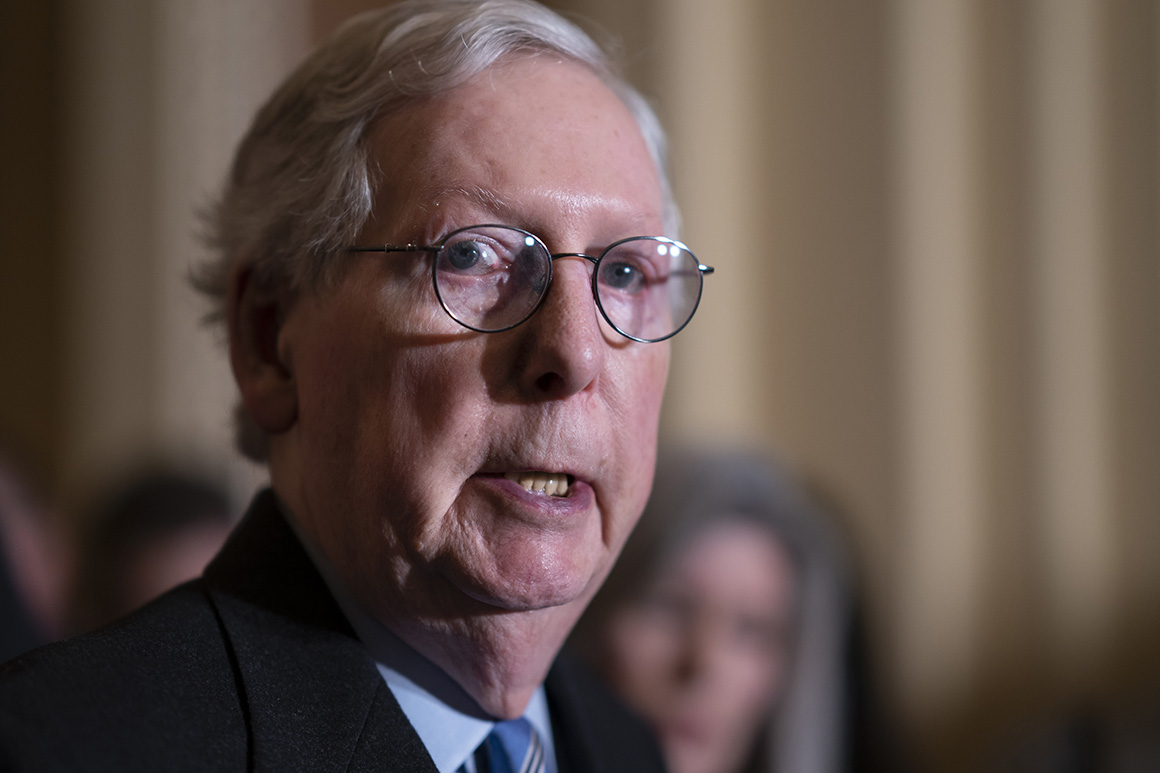 The Senate will vote Thursday to take up a one-time loophole to allow Democrats to raise the debt limit on their own, a major step toward warding off mid-December economic fallout.

The chamber will consider the initial 60-vote hurdle midday. At least 10 Republican senators are expected to vote in support, setting in motion the deal Senate Minority Leader Mitch McConnell struck with Majority Leader Chuck Schumer to prevent the United States from defaulting on its more than $29 trillion in debt as soon as next week.

Final passage on the debt ceiling workaround is expected to follow by week’s end. And both the House and Senate plan to pass another bill in the next few days to actually raise the debt limit. While Democrats have yet to divulge a dollar amount, the new ceiling is expected to exceed $30 trillion, to ensure Congress won’t need to act again until after the midterm elections next November.

“It will be a shock to the system for everybody — and anybody in the country who really can grasp a trillion dollars,” Sen. Roy Blunt (R-Mo.) said about the final vote Democrats are prepared to shoulder alone.

After months of partisan gridlock over raising the nation’s cap on borrowed cash, the vote would finally put Congress on track to thwarting a default. Treasury Secretary Janet Yellen has maintained that such a catastrophe could hit as early as next Wednesday, when the Biden administration needs to send $118 billion to the nation’s highway fund as a condition of the bipartisan infrastructure package the president signed into law last month.

The U.S. government has never before defaulted, but economists warn that failure would stun the global economy and undermine the United States’ reputation as a reliable debtor.

McConnell’s agreement to facilitate the workaround to the filibuster is seen as a rare bipartisan assist, even though Senate Republicans don’t plan to offer any GOP votes of support on the follow-up bill that would hike the debt ceiling.

While many Republican lawmakers slammed McConnell this week for negotiating what they say is a bad deal, the truce accomplishes two of the main conditions the minority leader has demanded all year. The Kentucky Republican repeatedly insisted Democrats vote alone on that increase, albeit through the budget reconciliation process the majority party is using to advance Biden’s social spending package. McConnell also wanted Democrats to raise the limit to a specific dollar amount, rather than suspending the cap until a certain date.

McConnell is “getting exactly what he wanted,” Blunt said. “In fairness, probably not the way he would have wanted it. But if you achieve the objective, sometimes you aren’t able to do that exactly like you would have preferred to do it.”

Democrats could have raised the debt limit through the reconciliation process they are using to pass the president’s $1.7 trillion social spending plan without GOP votes. But they were staunchly against doing so, as it would have involved a laborious process that would include dreaded vote-a-ramas, where Republicans could propose unlimited amendments to the bill. And Democratic leaders were loath to couple the president’s spending ambitions with a vote to allow the United States to exceed more than $30 trillion in debt.

McConnell seized on Democrats’ reluctance to conflate the two issues, refusing for months to put up any Republican votes to prevent a default, even though Congress has for decades handled the debt limit through bipartisan votes.

The initial Republican ultimatum “was really designed to drag things out and a prescription for not tackling the public’s business,” Senate Finance Chair Ron Wyden (D-Ore.) said this week. “Mitch McConnell is very skilled at advancing his agenda. His agenda from day one has been to prevent Joe Biden from having accomplishments.”

Since the nation’s borrowing limit kicked in more than four months ago, congressional intransigence on the debt ceiling has meant the United States has remained on the brink of default since early August, with a brief reprieve in October when Senate Republicans agreed to approve a few more weeks of leeway by supporting a debt limit increase of $480 billion.

The debt debate feeds into the GOP’s main campaign attack ahead of next year’s midterm elections, as Republican politicians tell voters that Democrats are racking up trillions of dollars in red ink, driving inflation and dampening the economy.

The country’s more than $29 trillion debt was spurred by decades of spending under both parties, however, including $5.5 trillion in debt during Donald Trump’s presidency alone.