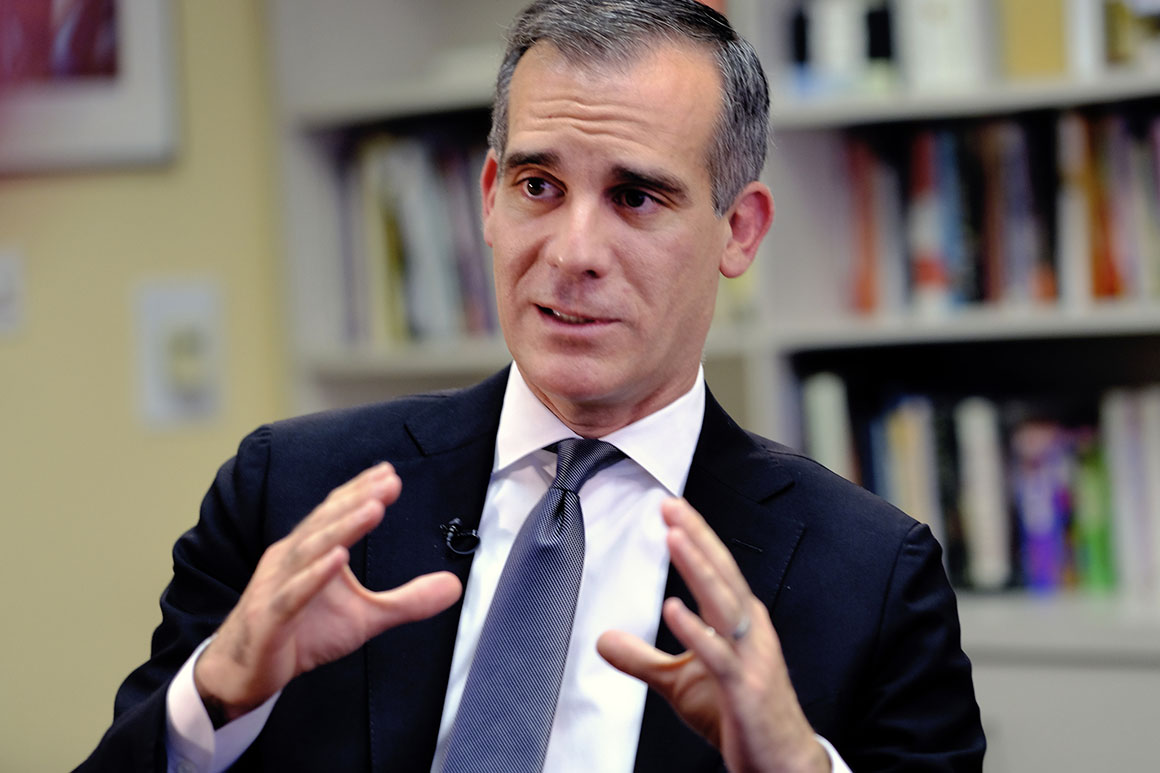 Little has come easy of late for Eric Garcetti.

Long viewed as a golden boy of California politics, the Los Angeles mayor was supposed to be nearing the one-year mark of serving in a top post in the Biden Cabinet. Instead, he’s preparing to leave his mayorship with the city upended by rising crime, sprawling tent encampments and a pandemic malaise that led one of his predecessors to declare that “Rome is burning.”

Most problematically, Garcetti has been swept up in endless headlines over sexual harassment allegations against a former top adviser, raising concerns that he oversaw an office culture that silenced victims.

During Biden’s transition, and in the months that followed, there was angst over how closely to embrace the mayor, with some fearing that he could become a distraction. Garcetti ultimately secured an ambassador nomination.

And for all those setbacks, Garcetti on Tuesday took another step toward landing one of the more consequential diplomatic posts: The ambassadorship in India. His sparsely attended, seemingly pro-forma hearing before the Senate Foreign Relations Committee produced no fireworks. It was the latest indication that the job is his (a formal committee vote is expected soon) and it will soon set off a scramble over who will get the interim gig to run America’s second-largest city.

Garcetti’s drama-free hearing underscored just how much Democrats are willing to stand by President Joe Biden on his nominations, even amid the harsh political winds around allegations of workplace misconduct. They also illustrate the degree to which loyalty continues to be one of the most valuable currencies for Biden, too. Garcetti didn’t just sidestep a presidential run of his own in 2020, he endorsed the president’s nomination at a low point in the primary, before going on to serve in high-profile roles, including co-chair of the Biden campaign, vice presidential selection committee and inaugural committee.

Inside Los Angeles City Hall, officials were convinced that the sexual harassment allegations against former Garcetti adviser Rick Jacobs would ultimately snarl Garcetti’s ambassadorship bid, particularly after a recent New York Magazine story concluded that the mayor knew about the complaints long before they were made public. But Garcetti has insisted, including under oath and again at the hearing on Tuesday, that he had no knowledge of any abuse, and that he wouldn’t have tolerated it if he had.

Few of the senators in attendance were inclined to press him on it.

Sen. Jeanne Shaheen (D-N.H.) was the only member of the panel to ask about the allegations that have shadowed Garcetti since Matthew Garza, a Los Angeles Police Department officer who spent years serving in the mayor’s security detail, filed a lawsuit last year alleging Garcetti witnessed the behavior and didn’t step in. There were no follow-ups from Shaheen, or the others.

Garza’s filing against the city in July 2020 contained allegations of crude and unwanted sexual comments and touching by Jacobs that he contended went on for years. It further alleged that at times Garcetti laughed at Jacobs’ crude comments. The suit was amplified three months later by Yashar Ali, the freelance writer and one-time political operative, who published a piece in which he reported a first-hand account about how Jacobs forcibly kissed and hugged him — as well as others. The story, Ali said, sparked immediate blowback.

“Despite repeated attempts by Mayor Garcetti and his supporters to disparage me,” Ali told POLITICO, “my reporting has been confirmed by several news organizations and by several witnesses in their depositions, given under oath, in the Garza lawsuit.”

Shortly after Ali’s initial story, The Los Angeles Times reported on two other accusers of Jacobs. The Times also surfaced a photograph of Jacobs, who has repeatedly denied harassing anyone, making a provocative gesture toward another man — with Garcetti pictured among the group. And in the New York Magazine article, published earlier this month, former Garcetti communications director Naomi Seligman detailed alleged abuse by Jacobs, parts of which were in deposition testimony she gave over the summer in the Garza suit.

Garcetti, for his part, has said throughout that he was unaware of his top aide’s behavior. His prospects for a top Biden post (initially Transportation secretary, then domestic climate czar or secretary of the Navy) dampened as more information about Jacobs emerged. In July, the president announced that he was nominating the mayor for ambassador to India, and a White House official reiterated at the time what Garcetti had said about his lack of knowledge about Jacobs prior to the lawsuit.

Garcetti’s Los Angeles city spokesperson said the mayor’s answer in his testimony Tuesday spoke for itself. Chris Meagher, a White House spokesperson, said Tuesday, “The president has confidence in Mayor Garcetti and believes he’ll be an excellent representative in India.”

Once nominated, Garcetti has faced relatively few hiccups. Seligman, in an interview, described the lack of scrutiny from U.S. senators on Jacobs’ allegations to be “profoundly frustrating” and “very disappointing.” But she said she had no preconceived notions of how politically impactful her claims against Jacobs would be.

“Did I know that sitting senators don’t want to embarrass President Biden? Yes, I knew that,” she said. “Did I hope someone would be more brave than that? Yeah.”

Seligman added that her attorney had offered to discuss the issue with the senators, and that staff on both sides of the aisle spoke with the lawyer. “These issues take a lot of sound judgment and [Garcetti] has shown that he doesn’t have sound judgment. And that wasn’t explored.”

Whatever detailed information staff got from their talks with Seligman’s representative didn’t make it into the course of Tuesday’s public hearing.

Garcetti was introduced by Sen. Alex Padilla (D-Calif.), who called the mayor’s credentials “impressive,” and said he’d led the city through a number of challenges while leveraging his position to exert influence over national and international organizations.

“We all know India is situated in a tough neighborhood,” Garcetti told the committee, adding that, if confirmed, he would extend efforts to strengthen India’s capacity to secure its border, defend its sovereignty, counter terrorism and deter aggression.

Garcetti said he’d visited India in 1990 and started studying Hindi and Urdu in college, along with Indian and cultural religious history, and pointed to the importance of human rights, trade and working alongside India to confront climate change.

Aside from the Jacobs scandal, Garcetti’s selection to the post turned some heads for how little involvement he has had with the country where he’s being dispatched. One close India observer offered that the big hope now among some diplomats is that Garcetti has Biden’s ear on sensitive and timely topics and may be able to avoid the chain of command that a career diplomat might face in getting to the president. But, the person added, speaking anonymously to avoid possible conflicts, “hope” is not the same as policy. 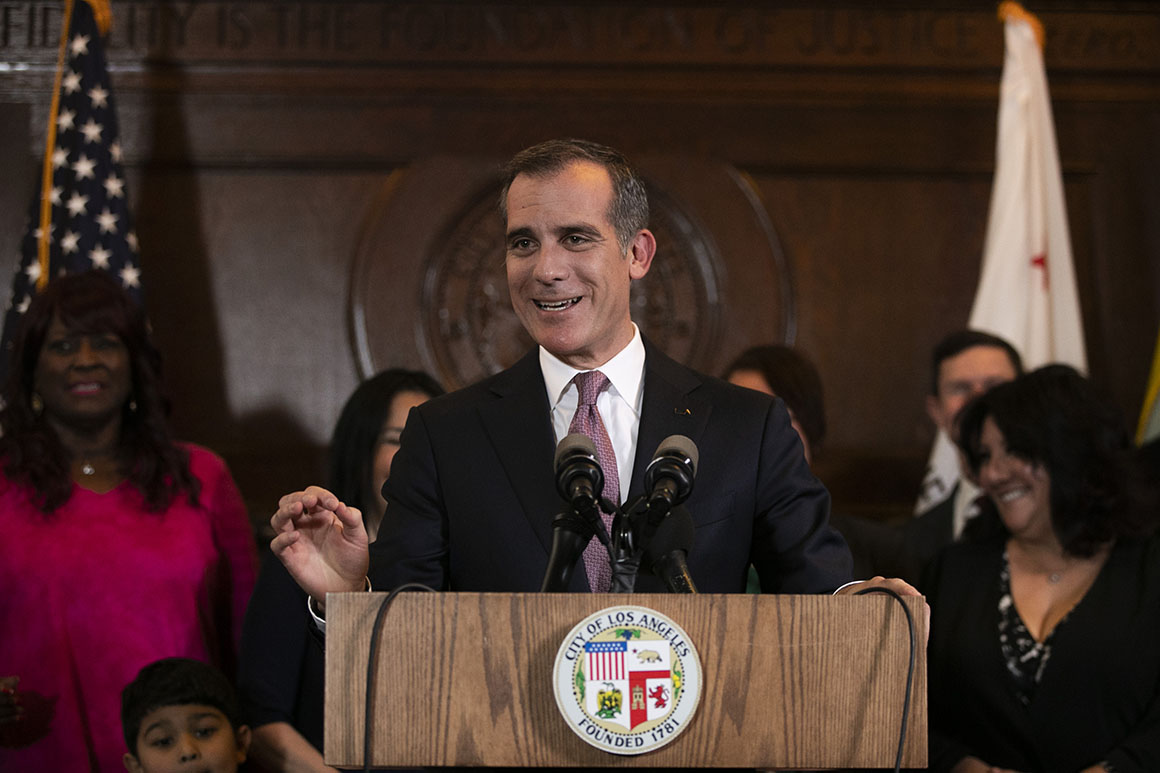 “People were a bit bewildered by the nomination because no one had heard of Eric Garcetti,” said Seema Sirohi, an Indian columnist for The Economic Times who is based in Washington and has covered India-U.S. relations for three decades. “At a time when China is supposed to be America’s big rival, and India a big source of strength, the Biden administration needed a candidate with strong foreign policy chops.”

For Garcetti, an early exit from Los Angeles would come at an uneasy time. When he first declined to run for president in 2019, vowing to instead take care of unfinished business, the city faced a surge in homelessness. That’s only grown worse since that time, adding to the challenges of the pandemic along with rising crime, from robberies to homicides.

Michael Trujillo, a Democratic strategist in Los Angeles who has been critical of Garcetti in the past and worked for former Mayor Antonio Villaraigosa, noted that for all the troubles at home, Garcetti found a way out and into big-league international affairs, something most ex-mayors had not been able to do.

With the nomination moving, there’s considerable jockeying for Garcetti’s job, albeit in an interim capacity before the next election for a four-year term takes place next year. The city council president, Nury Martinez, could step in. Another city councilmember, Paul Krekorian, is said to have the votes of his colleagues, two officials said, though it’s unclear if he wants to abandon his seat. Both scenarios would help city taxpayers avoid a costly election.

And Villaraigosa, who served as mayor from 2005 to 2013 and is barred from another full term, has been making calls and indicated he’s interested in the appointment, though only if it happens soon and he has enough time to maneuver in the job.

“It can’t be for six months,” he said on Tuesday, contending that too short a time in office would create difficulties in putting the city on its best footing.

Others aren’t excited for him to return, regardless of how long. A high-ranking source at City Hall likened Villaraigosa’s possible reemergence to that of an aging boxer “who has been beat up so many times that they offered him a job as a greeter in the casino lobby.”

Villaraigosa, who had issued his warning that “Rome is burning” on a recent local TV program, declined to respond.