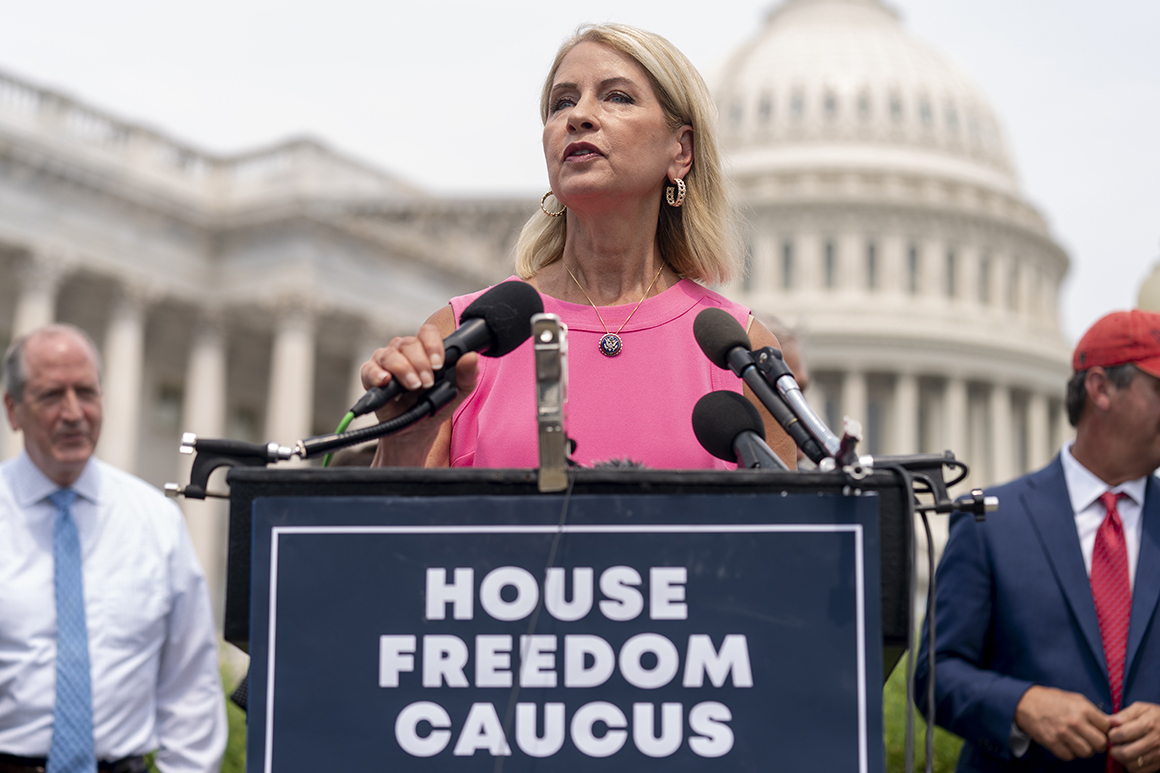 Illinois Democrats have GOP Rep. Mary Miller right where they want her.

The freshman Republican — who caused a frenzy during her first week in Congress earlier this year, when she gave a speech in which she said Adolf Hitler “was right about one thing” — doesn’t have a clear path back in 2023.

Miller told POLITICO this week she plans to seek reelection, but Illinois’ new congressional map splits her downstate district in two, leaving her in the undesirable spot of choosing between challenging GOP Reps. Mike Bost or Rodney Davis, two well-funded and popular incumbents who have both declared 2022 bids.

And while she squirms to decide her next move, her Democratic colleagues seem to be basking in her predicament.

“I do not feel sorry for Mary Miller,” said Rep. Robin Kelly (D-Ill.), who represents Chicago and also chairs the state Democratic Party.

Democrats in Springfield had total control over the redistricting process in the state and used their power to roil the GOP delegation. They shredded the district of Rep. Adam Kinzinger, a rare anti-Trump Republican, forcing him to decide between an early retirement or challenging fellow GOP. Darin LaHood in a primary. (He chose retirement.)

They created a new deep blue seat by uniting parts of Bost’s and Davis’s district into a snake that runs from East St. Louis north and east through Springfield, Decatur and Champaign, and created two other artfully drawn red-leaning seats downstate.

Davis is the only incumbent in the new 15th District, a sprawling centrally placed seat that includes of some Miller’s old turf. But the rest of her former seat — and Miller’s hometown of Oakland — is in Bost’s 12th District to the south. Miller appears to be shoved in with Bost: A skinny thumb jumps up above the northern border of the seat to include her house.

Bost moved quickly, declaring a run in the southern district in October and later rolling out endorsements from dozens of local mayors and elected officials and former GOP Rep. John Shimkus, who held Miller’s current district for 12 terms.

Bost said he called Miller a month ago, before he announced his campaign. “I asked her to get back with me. She had never got back to me,” he said in a brief interview Thursday on the Capitol steps, where Miller passed by her potential opponent soon after, on her way inside to vote.

Davis, meanwhile, announced earlier this week that he would seek reelection in the central district rather than run for governor.

“I’m running for Congress,” Miller told POLITICO in a brief interview earlier this week. But she said she had not yet figured out where she would run. She said previously she wouldn’t be intimidated by the new maps, remarking in October: “I can say I laughed when I read that they think they’re terrorizing me. Because I am not scared.”

Illinois’s candidate filing deadline is in mid-March of next year, and the primary is scheduled for June 28.

In a primary against Bost or Davis, Miller would likely try to run to the right. Both of their newly drawn districts would’ve backed former President Donald Trump by around 40 points in 2020, so the GOP nomination is tantamount to a win in November.

Throughout her first term, Miller has formed alliances with members of the ultra-conservative House Freedom Caucus, at times putting herself at odds with the House GOP conference.

Miller, a farmer and a homeschool teacher and wife of a state representative, was elected in 2020 to fill the seat of the retiring Shimkus. Her most high-profile moment came at the start of her term, when she attended a rally for a right-leaning group and said conservatives would lose unless “we win the hearts and minds of our children. This is the battle. Hitler was right on one thing. He said, ‘Whoever has the youth has the future.’”

(Miller later apologized for her comments, while lambasting critics for “intentionally trying to twist my words.”)

She’s also leaned into some tension within her own party.

Earlier this year, she participated in a press conference with the caucus advocating for a resolution that would’ve removed Kinzinger and Rep. Liz Cheney (R-Wyo.) from their committee assignments after they separately accepted appointments by Speaker Nancy Pelosi to serve on the select committee investigating the Jan. 6 attack on the Capitol.

Bost and Davis, elected in 2014 and 2012, respectively, have more seniority and could be in line for committee leadership roles. (Davis is the top Republican on the House Administration Committee, and Bost is the ranking member of the House Veteran Affairs Committee.)

Yet it might be somewhat easy for her to draw a contrast with Davis, who voted to certify the 2020 presidential election and to establish an independent Jan. 6 commission, unlike Miller.

Asked if he fears a challenge from Miller in the new 15th District, Davis pushed back: “I don’t know if I’ve ever given the impression when I’ve been out here in the last nine years that I’m really afraid of much, so you take on all challenges.”

“We didn’t ask for the gerrymandered mess that is the Illinois map,” Davis added. “But I’m going to run in the district that I live in, which is always where I will run. And my job is to make sure that we hold that seat for Republicans.”

Bost also did not seem to fear a matchup against Miller, touting endorsements and geographic edge. “If you look at the largest cities,” he said, referring to the 12th District, “the first five largest cities are in my old district,”

Wherever Miller chooses to run, she will ensure the state’s second member-on-member matchup. Democratic Reps. Sean Casten and Marie Newman are facing off for the same Chicagoland district. Georgia and West Virginia are also hosting battles incumbent-vs.-incumbent primary battles.

In Illinois, Bustos, who is retiring after this term, said she feels confident she already knows the outcome.