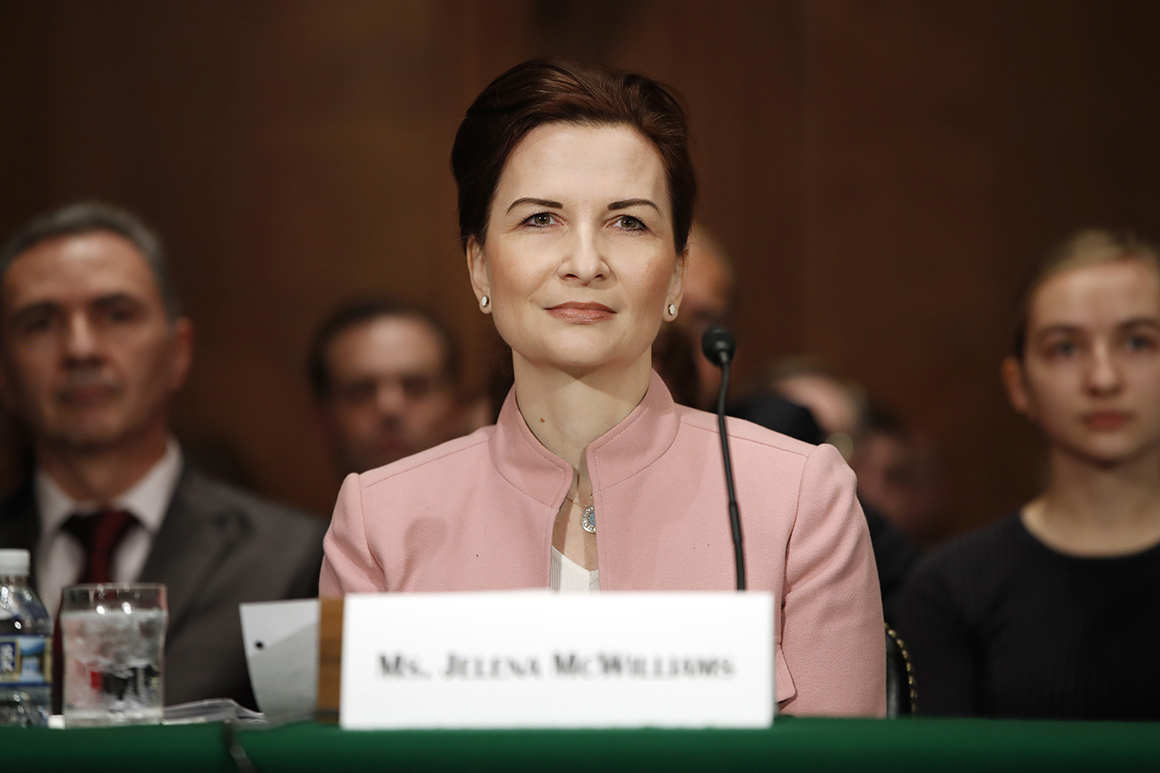 Federal Deposit Insurance Corp. Chairman Jelena McWilliams on Tuesday fought off an effort by Democratic board members at the bank regulator to circumvent her power, but the battle is not over.

A disagreement over who controls the FDIC’s agenda flared after the Democrats who make up the majority of the board voted to solicit public feedback on potential changes to the agency’s bank merger approval process.

Bank mergers are a crucial issue among progressives such as Sen. Elizabeth Warren (D-Mass.), and the attempt by the board Democrats to push through a review of the process has sparked a rare and remarkable public showdown at the 88-year-old regulator, which insures trillions of dollars in deposits at the nation’s banks.

At a board meeting that was livestreamed, McWilliams rejected a bid by Consumer Financial Protection Bureau Director Rohit Chopra — an FDIC board member and Warren ally — to add a record of the vote on bank merger approvals to the FDIC’s official minutes.

“The legal division has previously determined and the general counsel communicated to all board members that these actions did not constitute a valid circulation of a notational vote, and therefore the document cannot be added to the minutes,” McWilliams said. FDIC staff has not moved to make the document official.

Chopra was supported in his motion by another FDIC board director, Martin Gruenberg, who has been on the board since 2005 and served as its chair under President Barack Obama.

At issue is whether a majority of the board can put items up for a vote without the consent of the chair — a matter that will loom large at the agency, with progressive activists and lawmakers pressing bank regulators to also take action on other sweeping concerns such as climate finance and lending discrimination. Republicans, including Sen. Pat Toomey of Pennsylvania, have pushed back hard at that pressure.

A CFPB official suggested that the FDIC’s board members are prepared to pursue other remedies on the bank merger issue — which could potentially include a lawsuit.

Chopra in a statement after the board meeting called the FDIC general counsel’s stance on this matter “unusual and legally dubious.”

“We must resolve this matter immediately,” he said. “Absent a return to legal reality and constructive engagement, board members will need to take further steps to exercise independence from management and to ensure sound governance of the Federal Deposit Insurance Corp.”

But it’s unclear what steps might ultimately be feasible. Acting Comptroller of the Currency Michael Hsu, who also sits on the board, has given his support to the substance of the efforts by his fellow Democrats but signaled queasiness about the way the process has played out.

In his first formal statement since the fight broke into public view on Thursday, Hsu said he agreed that the FDIC’s bank merger guidelines are “ripe for review” and acknowledged that he voted in favor of the request for comment.

He said he cares deeply about the financial stability considerations that play into the decision of whether to allow further bank consolidation, “given large bank merger trends and my experience in the 2008 financial crisis with too-big-to-fail firms.”

“However, I am concerned that legal or procedural quicksand may ultimately limit our ability to act on this issue in a timely manner,” he added. “I believe the views of the majority of the FDIC Board members should influence the Agency’s agenda and actions. As a Director on the FDIC Board, I will continue to consider each issue on its merits.”