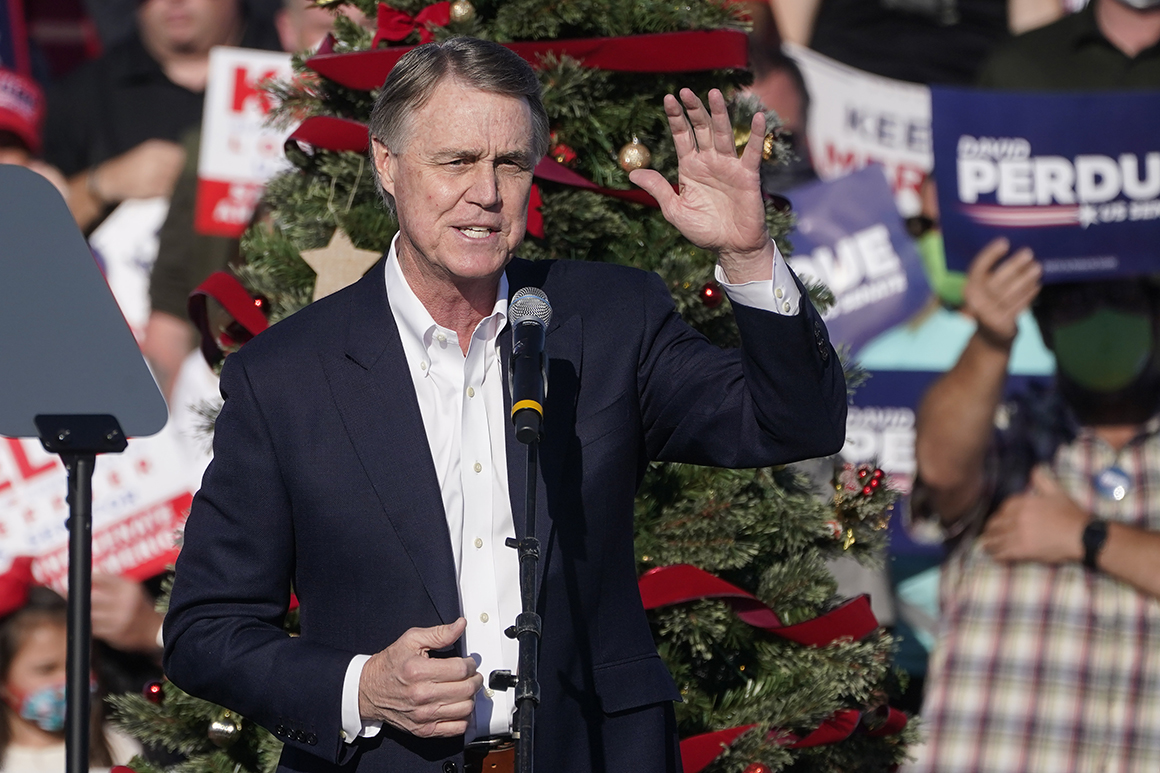 Perdue, who was recruited to run against the governor by former President Donald Trump, intends to make his announcement Monday via video and file his paperwork at the same time, according to sources briefed on the plans.

The former senator has discussed getting additional fundraising and endorsement support from Trump and that it will be forthcoming, the sources said.

The looming Republican primary opens a new front in the Georgia GOP’s civil war, which traces back to Trump’s loss in Georgia in November.

Those divisions played a role in the twin defeats of both of the state’s Republican senators, Perdue and Kelly Loeffler, two months later in January runoff elections.

Adding to the high stakes: The winner will face Democrat Stacey Abrams, who announced last week that she’ll challenge Kemp, to whom she narrowly lost in 2018. A campaign featuring Abrams and Perdue would place Abrams’ signature issue — voting rights — as well as Trump’s false claims of widespread voter fraud at center stage.

Trump recruited Perdue to run against Kemp after the governor refused to help block his state’s election results — multiple recounts showed Georgia was won by President Joe Biden. Kemp told reporters in Georgia last week that Perdue had told him he wasn’t planning to challenge him. But Perdue for months has shown signs he changed his mind.

“All I know is what Sen. Perdue has told me, I hope he’ll be a man of his word, but again that’s not anything I can control,” Kemp said.

One Republican official who has advised Perdue to run against Kemp pointed to recent polling from Trump’s Save America PAC that showed Trump’s endorsement would catapult the former senator into contention with the first-term governor.

“Trump’s endorsement matters to Republican voters and he’s going to be helpful because this race is important to him,” the adviser said, adding that Perdue hopes the former president will help support him through his political committee, his email list or with a fundraiser at Trump’s Mar-a-Lago club in Palm Beach.

A spokesperson for Trump could not be reached.

An adviser to Kemp, however, predicted that Trump’s endorsement and efforts for Perdue will only go so far in Georgia because a gubernatorial race is decided on state issues, unlike a Senate contest, which revolves around federal issues.

“The economy is roaring in Georgia. Jobs are great. Taxes are low,” a Kemp adviser, who was not authorized to speak on record, told POLITICO. “So what’s Perdue’s reason to run? That he’s Trump’s lap dog? That dog don’t hunt. Lap dogs don’t hunt.”

The adviser noted that even Trump’s own polling showed Kemp with a marginal lead over Perdue in a hypothetical matchup.

Still, the former president’s criticism has left a mark. Unlike Georgia GOP Secretary of State Brad Raffensperger, another Trump target who has repeatedly called out Trump for his “lies” about the election, Kemp has studiously tried to avoid calling out Trump.

Kemp was booed at his party’s state convention in June but managed to escape censure by the party.

At the Republican Governors Association meeting last month in Phoenix, officials said they were bracing for Perdue to challenge Kemp. They pledged to help the Georgia incumbent, as well as Idaho Gov. Brad Little, another GOP incumbent against whom Trump has endorsed his primary challenger, Janice McGeachin.

Trump has also feuded with Massachusetts Gov. Charlie Baker, who announced last week he would not run for a third term, and with term-limited Govs. Larry Hogan of Maryland and Doug Ducey of Arizona. Despite entreaties from top Senate Republicans, Ducey has declined to run for Senate in Arizona amid the withering fire from the former president.

“We’ve never been in a situation where our incumbent governors have faced primaries. Even at the height of the tea party primaries, where the House and Senate guys were being primaried, governors really never had that experience because you only run for reelection one time,” said an RGA strategist, who asked for anonymity to speak candidly. “Obviously, we’ve got different situations this year. And so we’re going to be — where appropriate, where necessary — financially supporting our incumbent governors in the primaries. That’s something we’re new to.”

When asked last month about Kemp’s predicament, Ducey refrained from criticizing Trump and pledged to stand by Republican governors, but he was vague on what level of support that would entail.

“We don’t fund losers. Won’t fund landslides,” said Ducey, who is the chair of the Republican Governors Association. “The RGA follows the 11th Commandment. We do not speak ill of another Republican.”