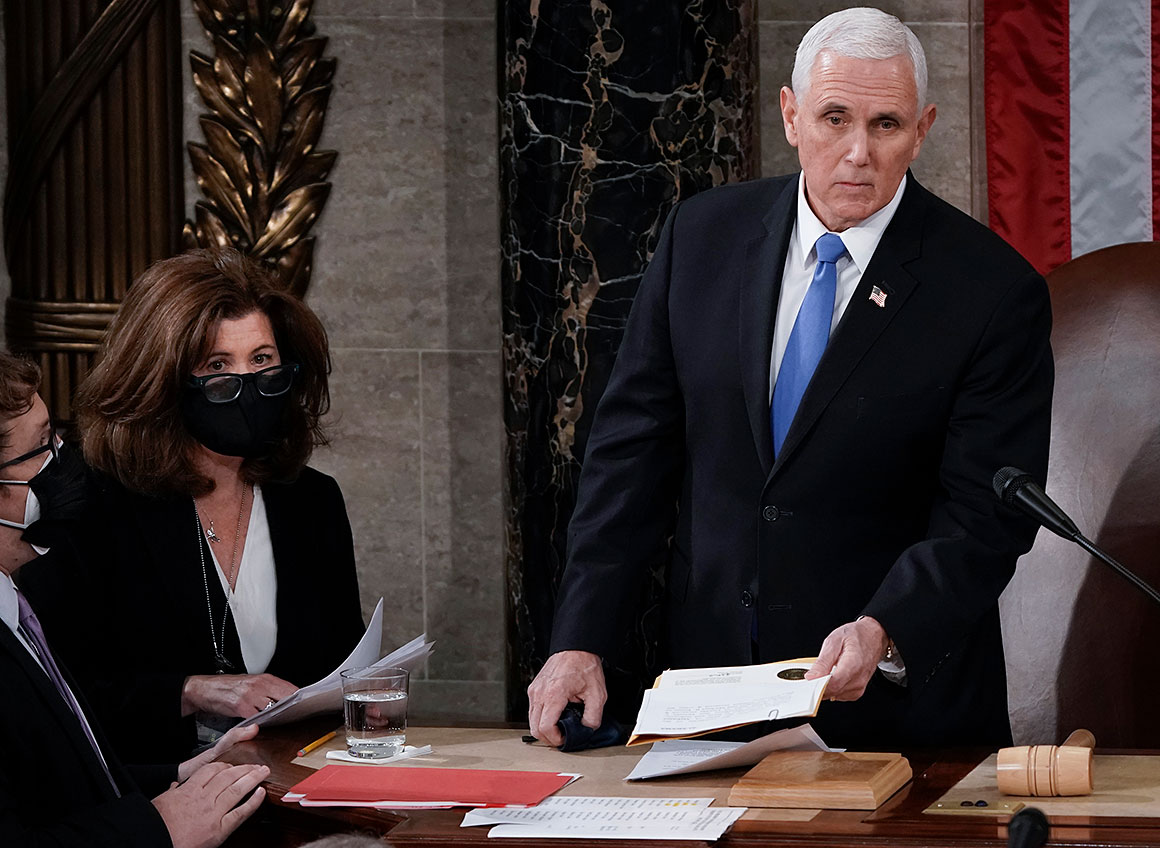 A Donald Trump campaign lawyer wrote two legal memos in the week before the Jan. 6 Capitol attack that claimed then-Vice President Mike Pence had the authority to refuse to count presidential electors from states that delivered Joe Biden the White House.

The memos from then-Trump lawyer Jenna Ellis, which contain widely disputed legal theories about Pence’s ability to stop a Biden presidency, underscore Ellis’ promotion of extreme arguments that she promulgated amid Trump’s effort to reverse the election results. Her actions have remained largely below the radar as House investigators probe Trump’s inner circle.

A Dec. 31 Ellis memo delivered to Trump’s office suggested that Pence — who was constitutionally responsible for presiding over Congress’ counting of electoral votes on Jan. 6 — should simply refuse to open envelopes from states whose election results Trump considered to be fraudulent. That memo was described by ABC reporter Jonathan Karl in his recent book “Betrayal.” POLITICO is publishing it in full for the first time.

In a second, previously unreported memo dated Jan. 5, Ellis made a more technical legal argument that she delivered to Jay Sekulow, one of Trump’s outside lawyers. Sekulow represented Trump during his first impeachment and in a series of legal battles during his administration, but he had minimal involvement in Trump’s election litigation. The exception was an early November Supreme Court case regarding Pennsylvania’s mail-in ballots.

In the Jan. 5 memo, Ellis argued that key provisions of the Electoral Count Act — limiting Pence’s authority to affirm or reject certain electors — were likely unconstitutional. She concluded that Pence, while presiding over lawmakers’ counting of electors, should simply halt the process when their alphabetical proceeding reached Arizona.

Then, she said, he should declare that the state failed to meet the legal standard for certifying its own electors and “require the final ascertainment of electors to be completed before continuing.”

“The states would therefore have to act,” she wrote.

Ellis said in a statement that her memos “were exploring legal theories” rather than wholesale endorsements of the legal strategies she was outlining.

“At no time did I advocate for overturning the election or that Mike Pence had the authority to do so,” Ellis told POLITICO. “As part of my role as a campaign lawyer and counsel for President Trump, I explored legal options that might be available within the context of the U.S. Constitution and statutory law.”

She discussed her theories about Pence’s authority before Jan. 6, including in a television interview on Just The News’ “The Water Cooler with David Brody.”

“What Mike Pence could do, and what he should do, in fact, is to direct a question back to the state legislatures,” she said at the time.

Sekulow said at the time that he didn’t believe Pence had any authority to reject Biden’s electors.

“Some have speculated that the vice president could simply say, ‘I’m not going to accept these electors,’ that he has the authority to do that under the Constitution,” Sekulow said on his radio show. “I actually don’t think that’s what the Constitution has in mind.”

He described Pence’s role as a “ministerial, procedural function.”

In an interview Friday, Sekulow said he continues to believe that Pence had no lawful authority to block any of Biden’s electors, but he suggested Ellis was entitled to her view.

“Jenna had the right to articulate a legal theory on behalf of the campaign,” Sekulow said.

Ellis’ memo to Sekulow may have been part of a bid to persuade him to reverse his position. She writes that Pence’s role was not a “ministerial function” — the same phrase Sekulow had used that day.

The House’s Jan. 6 select committee, which is investigating Trump’s efforts to overturn the election results, declined to comment.

Ellis, also a close ally of former Trump lawyer and adviser Rudy Giuliani, appears to only have drawn limited attention thus far from so far from the select panel probing Jan. 6. She was recently sued, along with Trump and Giuliani, by a Pennsylvania election official who says he faced threats to his safety and suffered a heart attack as a result of their claims of election fraud in the state.

Ellis worked closely with Giuliani in the aftermath of the 2020 election, traveling to multiple states to push Republican legislators in those locations to attempt to intervene before their presidential ballots could be certified. She later sought to convince state lawmakers to hold emergency sessions and attempt to submit alternate slates of Trump electors to Congress in advance of Jan. 6.

Ellis’ memos were written as other Trump advisers were laying out similarly extreme legal arguments for Pence to upend Biden’s victory.

Notably, Ellis’ memos did not go as far as those authored by lawyer John Eastman, another Trump adviser. Eastman claimed Pence had the authority to declare Trump the outright winner of the election by simply excluding dozens of Biden electors from Congress’ tally.

Under some versions of the strategy, the legislatures in states whose results Trump was hoping to overturn would be given 10 days to revisit their election results and determine whether to reverse them.

Pence ultimately rejected these arguments and counted the electoral votes certified by all 50 states, formally delivering victory to Biden. But Jan. 6 investigators have homed in on efforts by Trump’s inner circle to rationalize his attempted subversion of the election as they seek to understand his months-long campaign to remain in office.

In “Betrayal,” Karl reported that Ellis’ Dec. 31 memo was delivered to Trump’s office by Mark Meadows, then White House chief of staff. Meadows is suing the Jan. 6 committee as it prepares to hold him in contempt of Congress for refusing to sit for a deposition. But he’s also turned over a subset of records kept on his personal phone and email accounts that lawmakers on the panel say have been revealing.