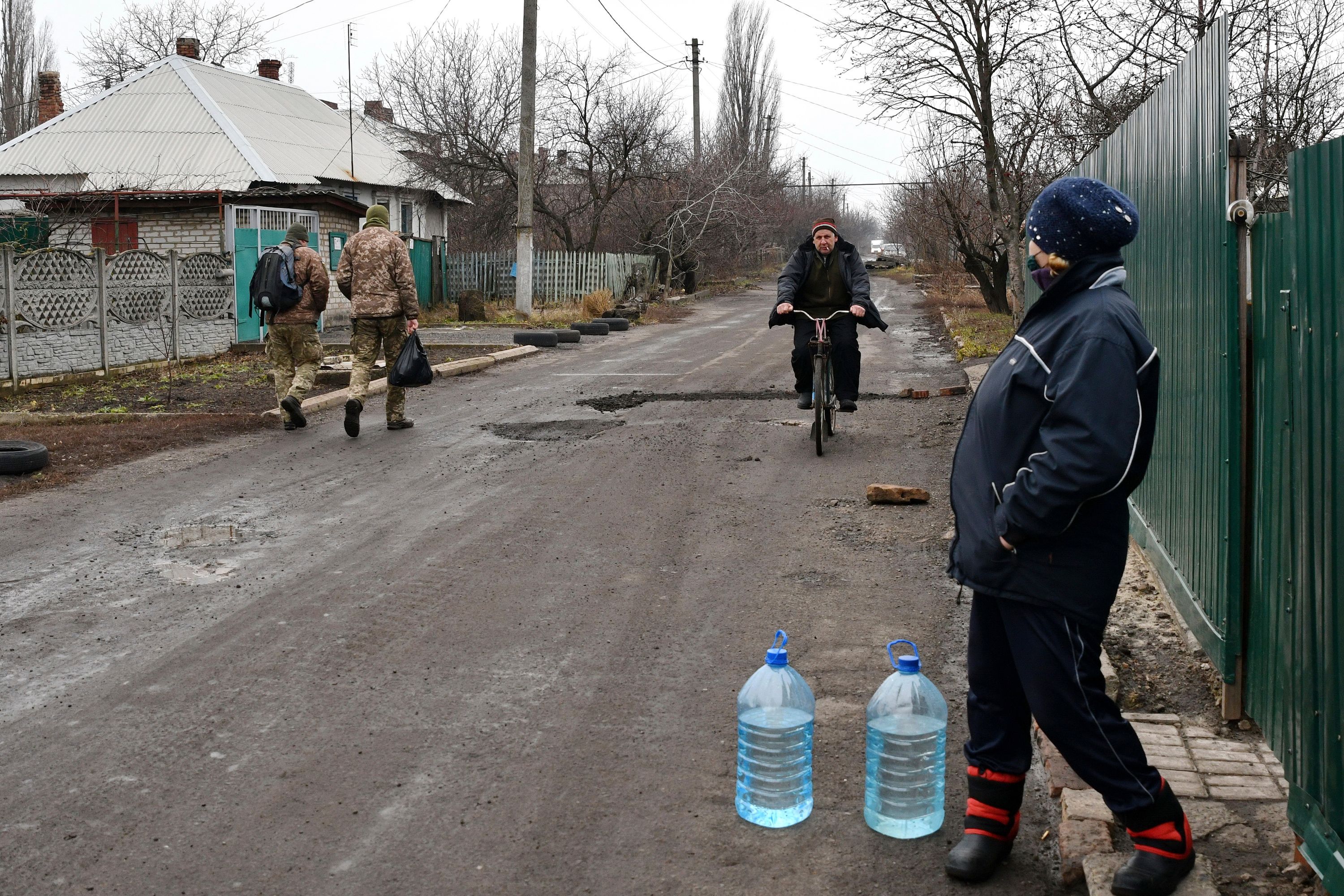 AVDIIVKA, Ukraine — The “Ukraine Risk Assessment” from Axel Springer, POLITICO’s parent company in Berlin, was blunt: “Donetsk is rated as EXTREME,” it said. “Travel to Donetsk should be avoided until further notice … Artillery and aerial bombardments occur regularly and civilian casualties are common.”

Another challenge, unmentioned, would be the mud.

As I read the assessment, I was halfway to Kostyantynivka, a small city in Donetsk that is the last stop — and the closest to the front line of the war in Donbass — on the seven-hour train from Kyiv, Ukraine’s capital.

“The greatest danger is while staying on the front line,” the security message said. “So please reduce your time there wherever possible.”

But with Russia massing troops on the border and the U.S. warning that an invasion could be imminent, our reporting trip sought to paint a picture of the war that has been going on for nearly eight years, killing more than 14,000 people and displacing more than 730,000. We also hoped to gauge whether the risk of escalation seemed as dire to Ukrainian soldiers and commanders as Washington claimed. So my colleague, the photographer Brendan Hoffman, and I were angling to spend as much time near the front as possible.

In Brussels, I cover the EU and NATO, where the main conflict zone is the press room at the European Commission and the biggest threat can be bad cafeteria food. So before flying to Kyiv, I drove 90 minutes from my office to West Flanders, close to the battlefields of World War I, to buy body armor. Expecting the mud, I also packed boots.

I’ve followed the Ukraine story closely since before the start of the Maidan Revolution in 2013, when I was a Moscow-based correspondent for The New York Times. I spent months in Kyiv during and after the pro-European protests, and also reported from Crimea where I saw Russian soldiers, in uniforms without insignia, remove the license plates from their military vehicles. And I was at one of the few Ukrainian military bases to put up resistance before it was finally taken by Russian forces that came busting in with armored vehicles and gunfire. 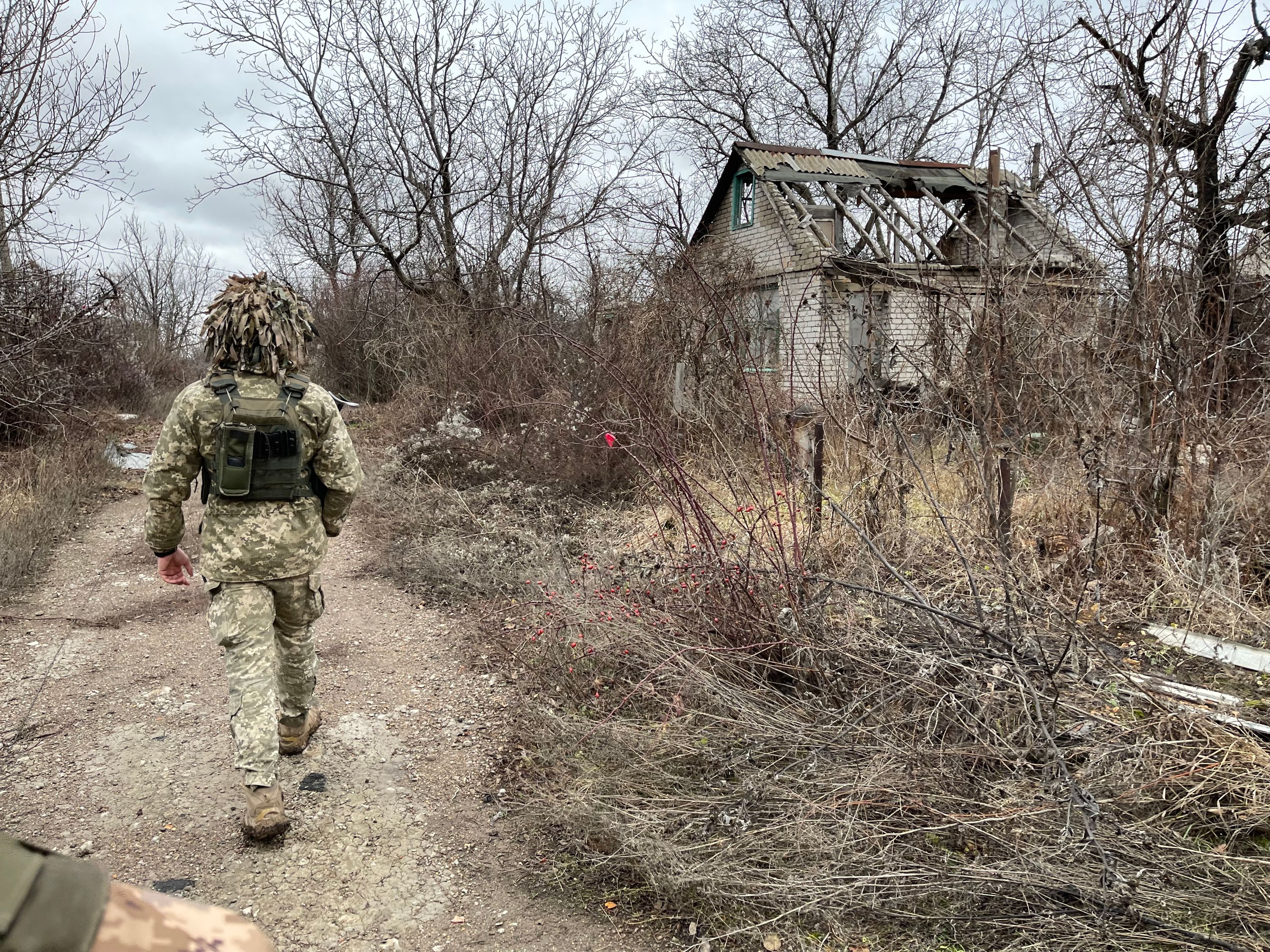 In these situations, the disconnect between political rhetoric and reality on the ground can be big.

As a result of the recent U.S. warnings, the world was suddenly trying to guess whether Russia would or would not invade Ukraine (again) — and, if so, when. But in Ukraine, we found less focus on the question of outright invasion and more concern that Moscow would never release the grip it already has over the occupied swaths of Donetsk and Luhansk. We also heard fears that the West would inadvertently help Russia destabilize the Ukrainian government by pressuring President Volodymyr Zelenskyy to hold local elections in Donbass and grant the region measures of autonomy without first restoring Kyiv’s political authority and its control over Ukraine’s border with Russia.

Invasion is an ever-present risk, but one that doesn’t fit with Putin’s hybrid strategy so far. Rather, conversations with soldiers on the front lines and civilians living nearby highlighted just how deeply Russia has entangled itself in Ukraine — not just in the occupied territories, but in the daily lives of Ukrainians who have grown accustomed to living with war, and whose aspirations to live in a normal, democratic European country hang in the balance.

Donbass is an old coal mining region, but war is now the area’s main occupation. The extent of that transformation was instantly visible at the rail stations in Kramatorsk and Kostyantynivka, where there seemed to be at least as many soldiers in fatigues as there were civilians.

As I arrived in Kostyantynivka on the “fast” train from Kyiv, there were soldiers in and outside the station, on street corners, and crowded into a Georgian café across the street selling coffee and the cheese-stuffed pies called khachapuri. In an old Soviet-style stolovaya, or canteen, where a full meal costs about $5, three soldiers were topping off their lunch with vodka shots.

After so many years of fighting and bloodshed — open warfare in the early years, a grinding battle of attrition more recently — military conflict, its bureaucratic encumbrances and its persistent sense of unease are now built into the landscape and into people’s lives. It is a sad situation similar to other zones that have experienced seemingly never-ending hostilities, such as Israel’s West Bank or Nagorno-Karabakh before last year’s decisive victory of Azerbaijan over Armenia. The abnormal — shelling and shooting, highway checkpoints, abandoned bombed-out buildings — is now normal. And the misery of war blends with the misery of the pandemic — as at military hospital No. 66, where we spoke to doctors who simultaneously treat patients with Covid and those wounded by shelling or sniper fire.

The human tragedy can be staggering to view and to hear about firsthand, all the more because it is unremarkable to the people experiencing it. On top of the lost lives, families have been separated, homes and livelihoods destroyed or abandoned. At a café in Kostyantynivka, Andrei Chornousov explained that he had not been able to attend the funerals of his parents who had remained in Donetsk after the start of the war. At first, he and his wife told their daughters, ages 8 and 6 at the time, that the bombs they were hearing were actually fireworks. Now, they are old enough to understand the truth. 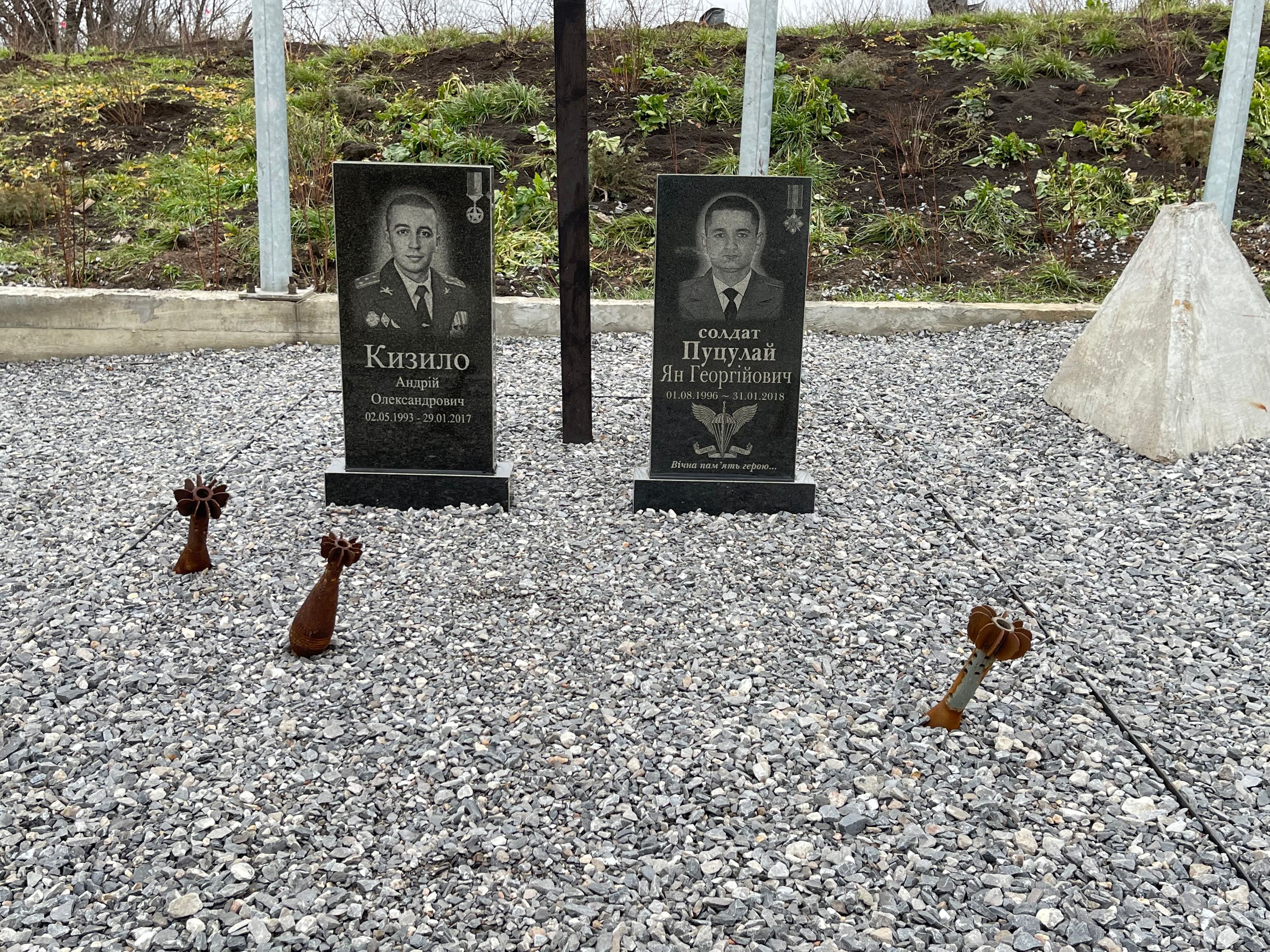 And yet throughout our visit, there was also a sense that ironically, Putin’s tactic of creating a frozen conflict in Donbass was backfiring; the status quo in many ways has been faring better for Kyiv than Moscow. Slowly but surely the Ukrainian military has been growing stronger, acquiring new weapons like armed drones from Turkey, and benefiting from NATO’s support, such as the U.K. helping to build new naval bases. Soldiers are under no illusion that Ukraine could win a war against Russia, but they are certain they will make Russia pay a high price in blood. Meanwhile, democratic reforms are advancing in Kyiv, even as Russia is stuck paying the bills in the occupied territories. It was not hard to see why Putin seems intent on shaking things up.

Early on the morning of our first full day of reporting, our gear was in the back of a military truck. After an hour’s drive and a brief stop at a checkpoint, we were in Avdiivka, on the outskirts of Donetsk. We were headed to an industrial zone close to the front line, where the soldiers dig into surrounding trenches, peer out at the enemy through periscopes, and sleep in a basement for protection against shelling.

On the way, we stopped in a residential neighborhood to see what was left of a nine-story apartment building that was hit repeatedly by shelling, and sits mostly vacant. Sitting on a bench outside in the building’s rear yard was Danil Derbrovsky, who used to live with his family on the seventh floor. They now live with his parents in a different part of town. Derbrovsky said the building was shelled more than 50 times in the early years of the war, yet somehow his apartment remained mostly intact. “Even the windows were not broken,” he said. “But we’re afraid to live here.” His daughter, Diana, was just 7 years old when the fighting started. She is now 15. 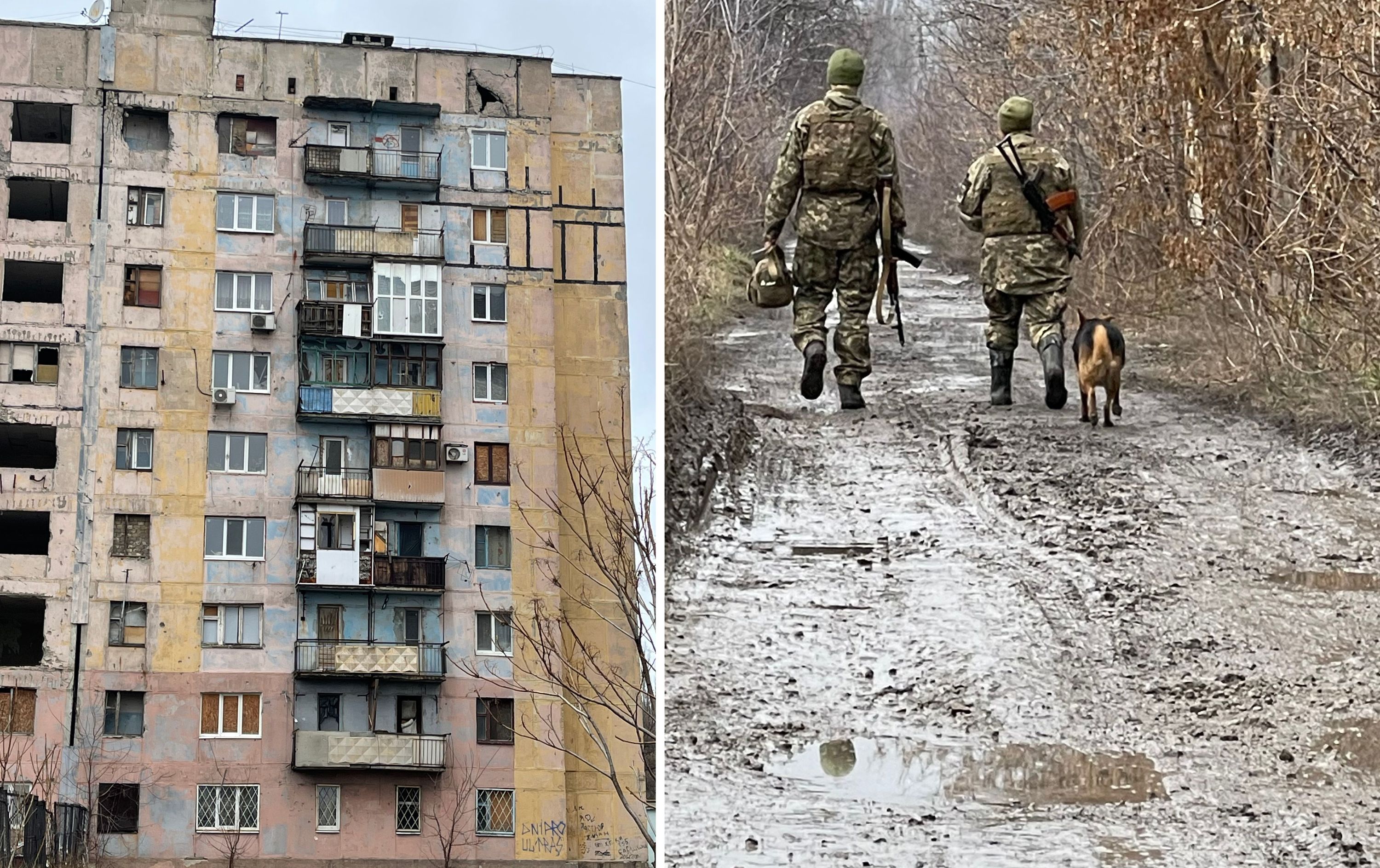 In Avdiivka, soldiers said that nothing had changed at the front for months, if not years. It’s a standoff, with fighting that ebbs and flows but never stops.

Leading us through ankle-deep mud to see his soldiers in their trenches, Senior Lieutenant Mykhaylo Novitskyi, who has a 1-year-old son, Timur, said he was not worried about a Russian invasion, and that the West also should not be intimidated by Putin. 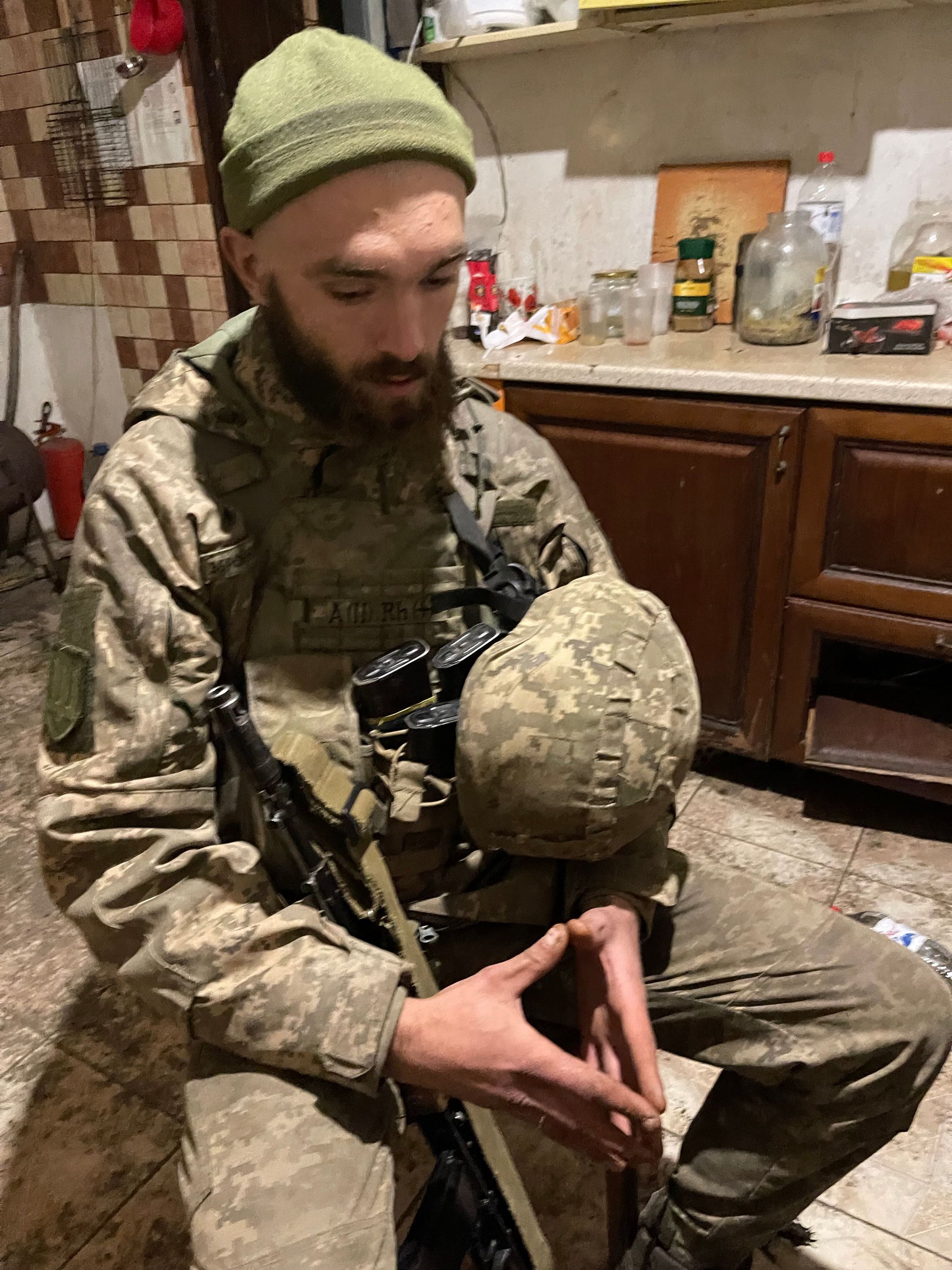 On the wall in one trench, the soldiers had tacked up photographs of injuries from sniper fire, as a reminder to stay vigilant.

“If we are not afraid, why should the West be afraid?” Novitskyi asked. “We are thinking about it all the time. There are three scenarios. The first is that Russia attacks, the second is that they give us the territories back, and third is they continue to provoke.” The most likely scenario, Novitskyi and other soldiers agreed, was the third.

In July 2020, a cease-fire between Ukraine and Russia provided some respite. But things began to worsen again this past spring when Russia massed troops on the border. Monitors from the Organization for Security and Cooperation in Europe say that by September, the numbers of cease-fire violations were back to pre-July 2020 levels. Now, with political tensions high, the violence has spiked even further.

The soldiers we met expressed little interest in politics. Most said they saw the war and their role in the conflict in the simplest terms: Russia and Russian-backed fighters had seized territory in Donetsk and Luhansk. Their job was to protect their land and to reclaim the occupied territories. If Russia invaded, they said, they would fight. 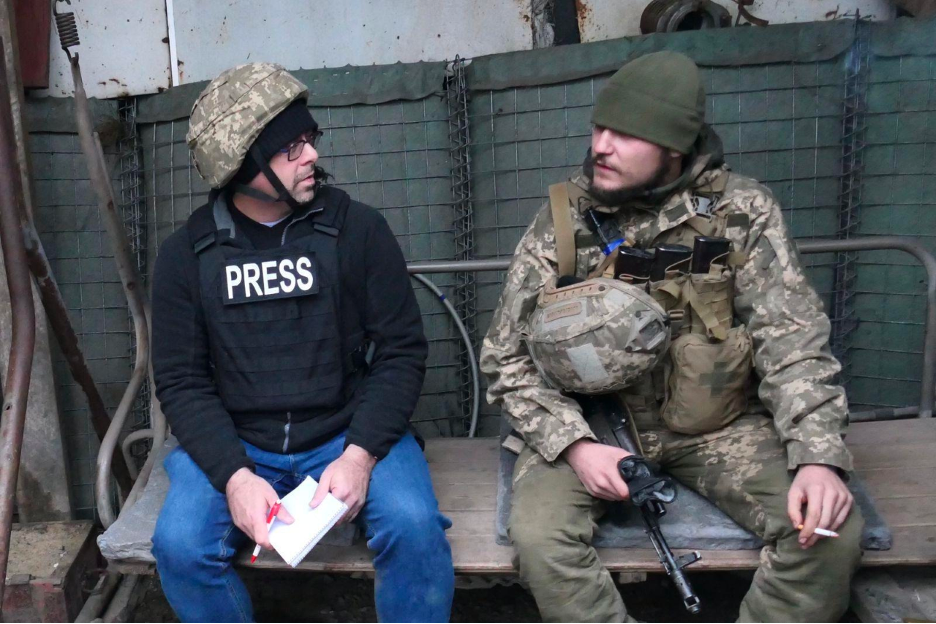 But there are reasons to believe that even if Putin decides not to push his troops beyond Donbass in pursuit of a land bridge to Crimea, as some in the West fear, Russia will not back away.

One soldier we met in the frontline village of Pisky had attended a military high school in Donetsk before the start of the war. The school’s website notes that it is now following Russian educational regulations “on the official instructions of the President of the Russian Federation, Vladimir Vladimirovich Putin.”

The Kremlin for years has pursued a policy of soft annexation in the occupied territories, issuing Russian passports to residents, imposing Russian education regulations, and generally controlling regional governance. The territories are increasingly isolated. The checkpoint that we visited near the occupied city of Horlivka used to handle 12,000 crossings per day, but has been closed by the separatist side, ostensibly because of Covid, since March 2020. 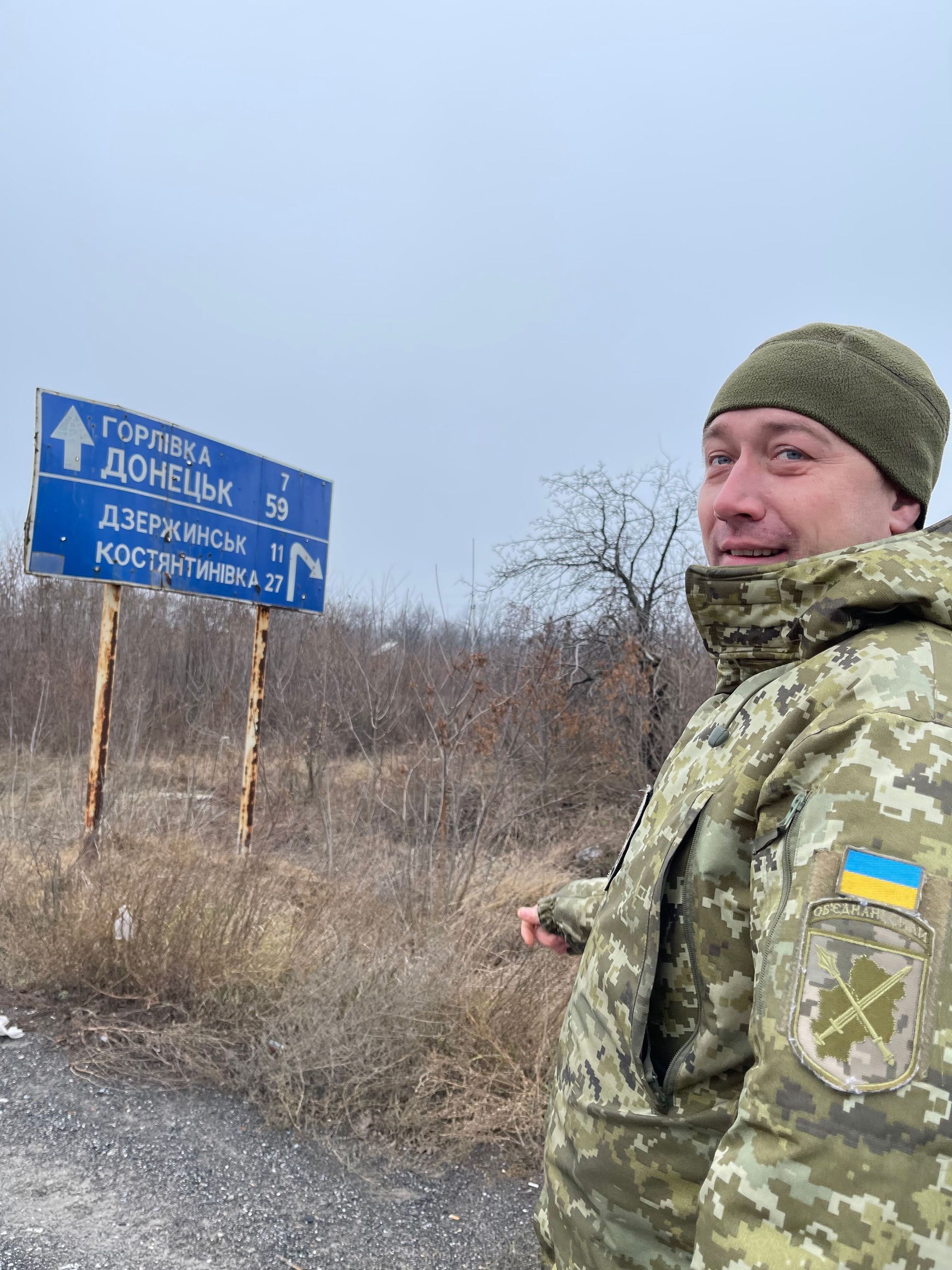 Meanwhile, the Kremlin last week reiterated a list of demands, including a hard guarantee that NATO would not expand eastward, but that made no mention of the situation in Donbass — a sign to some that the military incursion into Ukraine is meant to create leverage, a means to grander geopolitical ends.

Essentially, Russia appears to be using Ukraine as a pawn — precisely what Putin accuses the West of doing, as he did in a long treatise last summer proclaiming Russians and Ukrainians to be “one people” who share a “historical motherland” but accusing Kyiv of serving “external patrons and masters.”

Back in Avdiivka, Novitskyi urged the West not to buy Russian propaganda. He reiterated that there was no reason for Ukrainians to fear. “We’re at home,” he said. “And at home, you relax.”