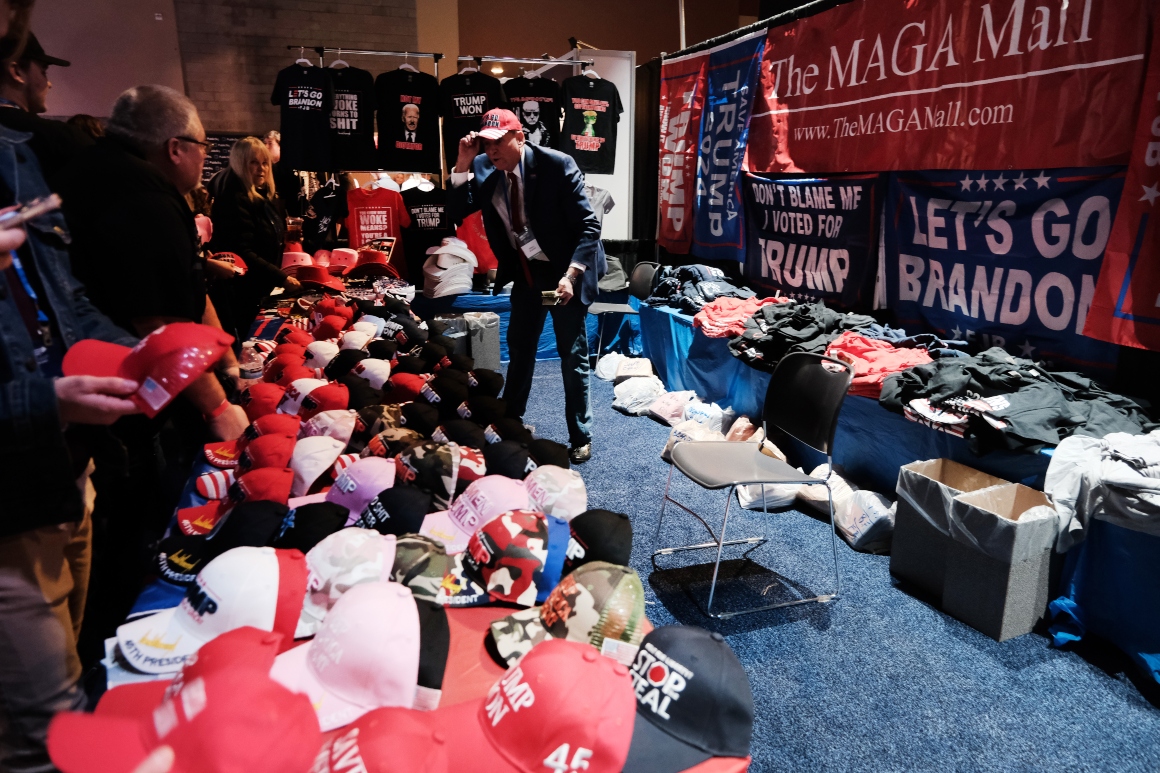 Donald Trump has already telegraphed the remarks he plans to give at Mar-a-Lago on Thursday, the anniversary of the Jan. 6 riot at the Capitol.

If he follows the script laid out in his announcement of the news conference, he will commit a whitewashing of the day, repeating the lie that the 2020 election was rigged and defending his part in fomenting the insurrection — all while a solemn prayer service is held at the Capitol, in a vivid split-screen moment. And, as Trump castigates Republicans not toeing his line, his event will also serve as a marker of Trump’s extraordinary dominion over the GOP.

One year ago, many prominent Republicans predicted Trump’s behavior on and ahead of Jan. 6 would relegate him to the fringes of the right, shaming the GOP back into the mainstream. Instead, the opposite has happened. When Trump speaks, he will set the table for a midterm election year with him firmly at the Republican Party’s center.

“It’s become almost a religion in the Republican Party,” said Jason Shepherd, the former Cobb County, Ga., GOP chair, who resigned from his local party after it voted to censure Republican Gov. Brian Kemp, one of Trump’s political enemies. “You have your believers, and you have your heretics, and anyone who isn’t willing to follow Trump 100 percent, or wants to question Trump, that’s now the new definition of a RINO“ (Republican in Name Only).

One year after the riot at the Capitol, nearly three-quarters of Republicans still believe Trump’s baseless claim that Joe Biden won the presidency due to voter fraud, according to a Monmouth University poll. Rank-and-file Republicans’ interest in litigating the events of Jan. 6 has faded. And according to a Quinnipiac University survey, nearly 8 in 10 Republicans want Trump to run for president again in 2024.

“It’s extraordinary,” said Ralph Reed, the Republican strategist and founder of the Faith & Freedom Coalition. “You could make the argument that he’s in a stronger position within the Republican Party today than he perhaps ever has been.”

“In many ways,” Reed continued, with Republican candidates across the country all clamoring for Trump’s endorsement, “the party may be moving in a more conservative, more populist and more Trumpian direction with him out of office” than if he had been reelected.

For a split-second last year, it seemed that Trump’s grip on the GOP had broken. Following the riot at the Capitol, Karl Rove, the Republican strategist, said Trump was “effectively tarnished for all time and incapable of running in 2024.” Rep. Nancy Mace (R-S.C.), who worked on Trump’s 2016 campaign, said Trump’s legacy had been “wiped out.” Republicans who had previously supported Trump were urging him not to run again.

“He is not the leader of any Republican Party I recognize,” Scott Jennings, who worked for President George W. Bush, said at the time.

Yet a year later, Trump’s leadership of the party is indisputable. His political committees have amassed more than $100 million. His allies have expanded their reach throughout the party’s infrastructure in the states. And together with Trump, they are methodically running Trump-critical Republicans from the fold.

Reps. Adam Kinzinger of Illinois and Anthony Gonzalez of Ohio, two of the 10 House Republicans who voted to impeach Trump following the riot at the Capitol, have already announced they will not seek reelection this year. In Wyoming, state Republican Party leaders voted in November not even to recognize Rep. Liz Cheney, another impeachment backer and a fierce Trump critic, as a member of their party. Trump is intervening in Senate and gubernatorial primaries across the midterm map.

“Look, if you’re a Senate candidate or a House candidate, what you don’t want is Trump endorsing against you,” said Bob Heckman, a Republican consultant who has worked on nine presidential campaigns, including Sen. Lindsey Graham’s in 2016.

One longtime Republican strategist said, “He will torture everyone, and campaigns will have to have a segment of their strategy based on Trump, and how he’s going to react.”

In part, Trump is capitalizing on the same midterm election dynamic that is lifting all Republicans this year, as the out-party historically performs well in a president’s first midterm. But Trump is also benefiting from a unique, one-to-one comparison with his Democratic successor. Biden’s public standing took a hit following the chaotic withdrawal of U.S. troops from Afghanistan last summer, including the deaths of 13 U.S. service members in a terrorist attack, and his public approval ratings have also suffered amid the ongoing coronavirus pandemic and legislative impasses in Washington.

Shelley Kais, chair of the Republican Party in Pima County, Ariz., described Trump, with his frequent broadsides against Biden that set the tone in conservative media, as “leading the way doing the compare and contrast.” And in public opinion, there is little daylight between them. Trump’s favorability rating, at about 43 percent, is not strong in normal political terms — but it’s nearly identical to Biden’s job approval rating, according to the FiveThirtyEight polling average.

“What has helped President Trump more than anything is President Biden,” said Randy Evans, a Georgia lawyer who served as Trump’s ambassador to Luxembourg. He continued: “It’s Biden’s bad year that has literally re-energized the Trump base.”

Early last year, Republicans’ enthusiasm for Trump appeared at least tempered by the events of Jan. 6. But evidence is everywhere that no longer is the case. In March, 79 percent of Republicans and Republican-leaning independents said it was important to prosecute people who rioted at the Capitol, according to a Pew Research Center poll. But by September, that percentage had fallen more than 20 percentage points, to 57 percent, and a majority of Republicans say too much attention is paid to the riot.

Nor is Trump shying away from that day. In announcing his news conference last month, he wrote, “remember, the insurrection took place on November 3rd, it was the completely unarmed protest of the rigged election that took place on January 6th.”

Trump’s “brand is fighting back on political correctness, and when you’re fighting like that, everything you do is on brand,” said a Jeff Roe, a Republican strategist who managed Texas Sen. Ted Cruz’s presidential campaign in 2016. “So it’s kind of hard to screw it up, because he’s always fighting.”

Of Trump’s ability to maintain support and generate crowds while out of office, Roe said, “It’s insane what he can do. Crazy. It’s almost like we’ve gotten used to it, but you stand back from it, it’s insane.” 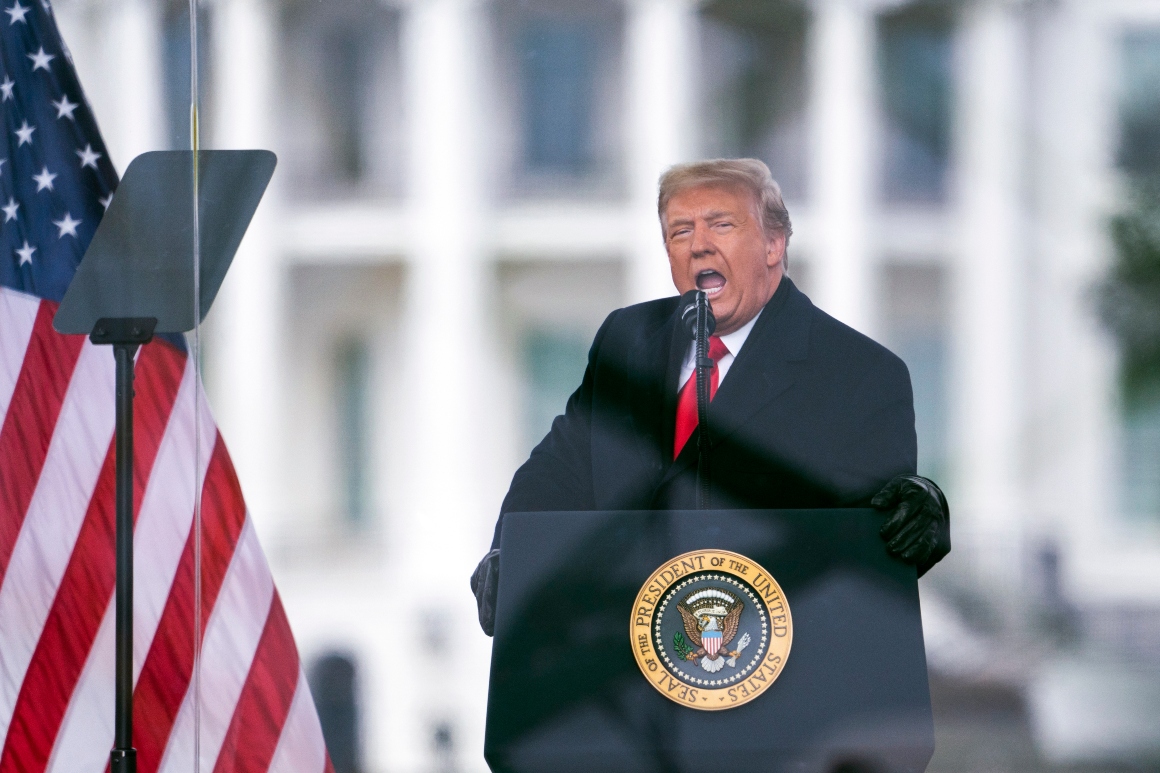 Trump may still fade — or decide not to seek the White House again in 2024. He will be 78 by the time of the general election, and though he is now widely expected to run again, a weak performance in the midterms could damage him. His preferred Senate candidates in a handful of states have already stumbled.

On top of that, the Jan. 6 select committee investigating Trump’s effort to overturn the result of the 2020 election is still working, with the potential that its findings will spark criminal prosecutions. In mid-December, the committee released a series of text messages from lawmakers and Fox News hosts urging Trump’s chief of staff, Mark Meadows, to press Trump to do more to end the violence.

But Trump has rattled Republicans so often before — and with no significant long-term effect — that few are confident anything could displace him in the party.

After Jan. 6, “there was a two- to three-day window where his most hardcore supporters — where even they were a little blown away, surprised by what happened,” said former Illinois Rep. Joe Walsh, who unsuccessfully challenged Trump for the Republican presidential nomination in 2020. “But by the end of that first week, they’d regrouped.”

A year later, Walsh said, Trump is “by far” more influential in the GOP than he was in the final month of his presidency.

“He survived that,” Walsh said. “He’s stronger than ever.”