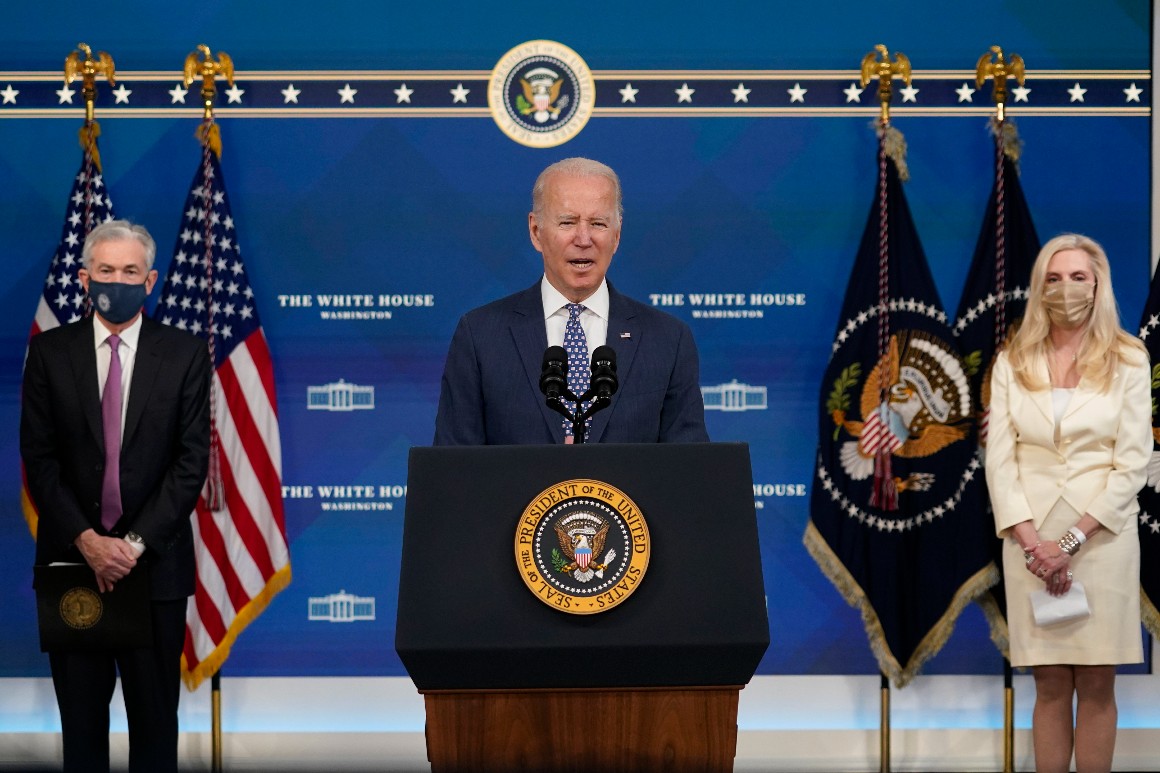 President Joe Biden’s latest nominations to the Federal Reserve Board mark a major victory for lawmakers and other diversity advocates who have long pushed for new voices at the world’s most powerful central bank.

Biden on Friday tapped two Black economists — Lisa Cook and Philip Jefferson — for open seats on the board. He also named Sarah Bloom Raskin, an aggressive regulator and former Fed governor, for the top job overseeing the nation’s banks, which would make her the first woman to hold that post.

Biden’s move, which came after a lobbying campaign by lawmakers such as Senate Banking Chair Sherrod Brown (D-Ohio), House Financial Services Chair Maxine Waters (D-Calif.) and other members of the Congressional Black Caucus, would solidify the president’s influence over the Fed during a time of tremendous economic uncertainty for the country. He has already renominated Fed Chair Jerome Powell and picked Fed Governor Lael Brainard to be vice chair.

If confirmed, the president’s selections would change the makeup of the white male-dominated Fed board of governors. In its nearly 109-year history, the board has only had three Black members — with the last one, Roger Ferguson, leaving in 2006.

That lack of representation led to mounting frustration among key Democratic constituencies — and prompted Biden to pledge in November to bring “new diversity” to the Fed — even as the central bank has begun to focus more on disparities in economic outcomes for disadvantaged communities.

“For the past six years, I have pressed multiple Federal Reserve chairs to increase the diversity of the leadership and staff,” Rep. Joyce Beatty (D-Ohio), who heads the Congressional Black Caucus, told POLITICO before the announcements. “While the Fed has made great strides in some areas, we have much work to do with regards to the members of the [Federal Open Market Committee], who determine this country’s monetary policy.”

Biden’s new Fed would be the most diverse ever, with four women on the seven-member board and its first woman of color with Cook. “This group will bring much needed expertise, judgment and leadership to the Federal Reserve while at the same time bringing a diversity of thought and perspective never before seen on the board of governors,” Biden said in a statement announcing the nominations.

The new members are likely to push for a greater emphasis at the Fed on issues such as climate change financing, diversity in the financial services industry and lending discrimination, areas that have often been considered secondary to — or, in the case of climate, not even part of — the central bank’s responsibilities.

That will spark resistance from some Republicans, who have complained that the Fed is exceeding its mission of promoting price stability and maximum employment. Raskin and Cook are likely to draw the most criticism from GOP lawmakers on the Senate Banking Committee, which will vet the nominees.

“Members of the Fed’s Board of Governors should have exceptional qualifications and a strict view of the Fed’s narrow mandates on monetary policy and banking supervision,” Sen. Pat Toomey (R-Pa.), the top Republican on the committee, said in a statement Thursday night. “I will closely examine whether Ms. Cook and Mr. Jefferson have the necessary experience, judgment, and policy views to serve as Fed Governors.”

Toomey, who has already raised concerns about Raskin’s nomination, said he worried that she would go beyond the Fed’s mandates “to have the central bank actively engaged in capital allocation.”

The president’s selections could also be a counterweight to the drive to act more aggressively to fight spiking inflation, a possible source of tension on the board and with GOP lawmakers. Many progressives have pressed the Fed to keep interest rates low for as long as possible until more Americans can feel the benefits of the recovery.

The jobless rate among Black Americans has historically been twice that of white workers, which means the prospect of curbing economic activity to choke off inflation raises equity issues.

By naming Raskin, a onetime deputy Treasury secretary, Biden is putting in place an official who has pressed for tougher oversight of Wall Street. That could mollify financial regulation advocates who have slammed Powell for easing rules on big financial firms and not doing more to combat climate change.

Some Black members of Congress were hoping that Cook, a Michigan State University professor, would be tapped as vice chair at the Fed with Brainard elevated to chair, according to a person familiar with the matter. Brainard instead got the No. 2 slot while Powell was renominated for the top job.

Now those advocates are counting on Cook to bring to bear her work on the economic effects of racial discrimination and experience in mentoring other young people of color in economics, as they look to expand diversity elsewhere at the Fed. She also secured the support of climate groups and other activists.

Jefferson, a former Fed economist, is a professor and administrator at Davidson College in North Carolina. His work has focused on the “role of education as a buffer against unemployment, the effect of business cycles on poverty rates, and the distribution of income between labor and capital,” according to his bio.

If confirmed, the members will have a voice in approving new leaders for the Fed’s regional branches, who are not appointed by the president. Advocates see the potential for a cascading effect; as diversity increases at the board, so too does the central bank’s personnel network.

And the Fed has its work cut out for it. The Brookings Institution last year found that in any given year during the 2010s, less than 10 percent of the board members at each of the 12 regional Fed banks were nonwhite. Those directors are key to finding and selecting their bank president, who sits on the Fed’s interest-rate setting committee.

Only two of those 12 presidents — Atlanta Fed President Raphael Bostic and Minneapolis Fed President Neel Kashkari — are people of color.

Meanwhile, The New York Times reported that only two of the 417 staff economists at the Fed board were Black, as of central bank data provided in January 2021.

Sen. Bob Menendez (D-N.J.) also lectured Powell at his nomination hearing on Tuesday over the fact that no Latinos have ever served in a top policymaking role at the Fed.

Powell has committed to building a more diverse workforce at the central bank.

“We are working to foster an inclusive workplace environment where staff can feel comfortable at work and to promote a similarly inclusive culture within the profession,” he said in November at a diversity and inclusion conference co-hosted by the Fed. “We are working to broaden our reach by recruiting at historically Black colleges and universities and Hispanic-serving institutions, as well as by hosting events to promote career opportunities at the Fed.” 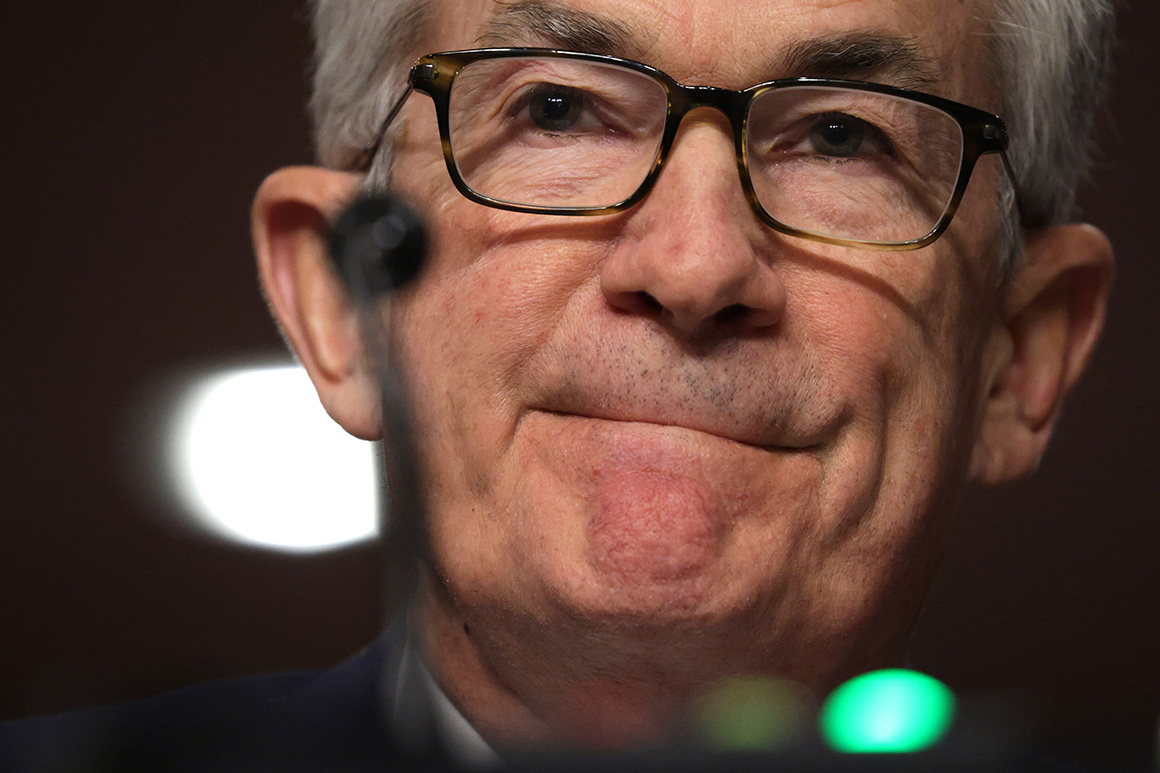 Against that backdrop, the Congressional Black Caucus has asked the administration and the Fed for more diverse representation in monetary policy. Beatty and Sen. Raphael Warnock (D-Ga.) are focused on ensuring that it’s a priority in the searches for new leaders at the Boston Fed and Dallas Fed.

Those searches are a focus for groups like the Fed Up Campaign, which have pressed the Fed to overhaul how regional presidents are selected. The Dallas Fed held a town hall this week to solicit public input, suggesting some of that pressure is working.

“Why is it that in 2021 there are still only two presidents of color among the 12? It should be a scandal, but it sure as hell isn’t an accident,” said Benjamin Dulchin, director of Fed Up, a coalition of community and labor groups that advocates for central bank policies that benefit workers.

Progressive activists have highlighted the importance of diversity of background as well, saying the Fed should look beyond Wall Street and Ph.D. economists.

“The diversity argument gets so lost in racial tokenism, like we need one of each color, but a lot of what we’ve been pushing for is racial diversity, gender diversity, ideological diversity,” said Vasudha Desikan, political director at the Action Center on Race & the Economy. “Lisa Cook is grounded in the Black communities that she comes from and grew up in but is also a part of.”

Laura Barrón–López contributed to this report.