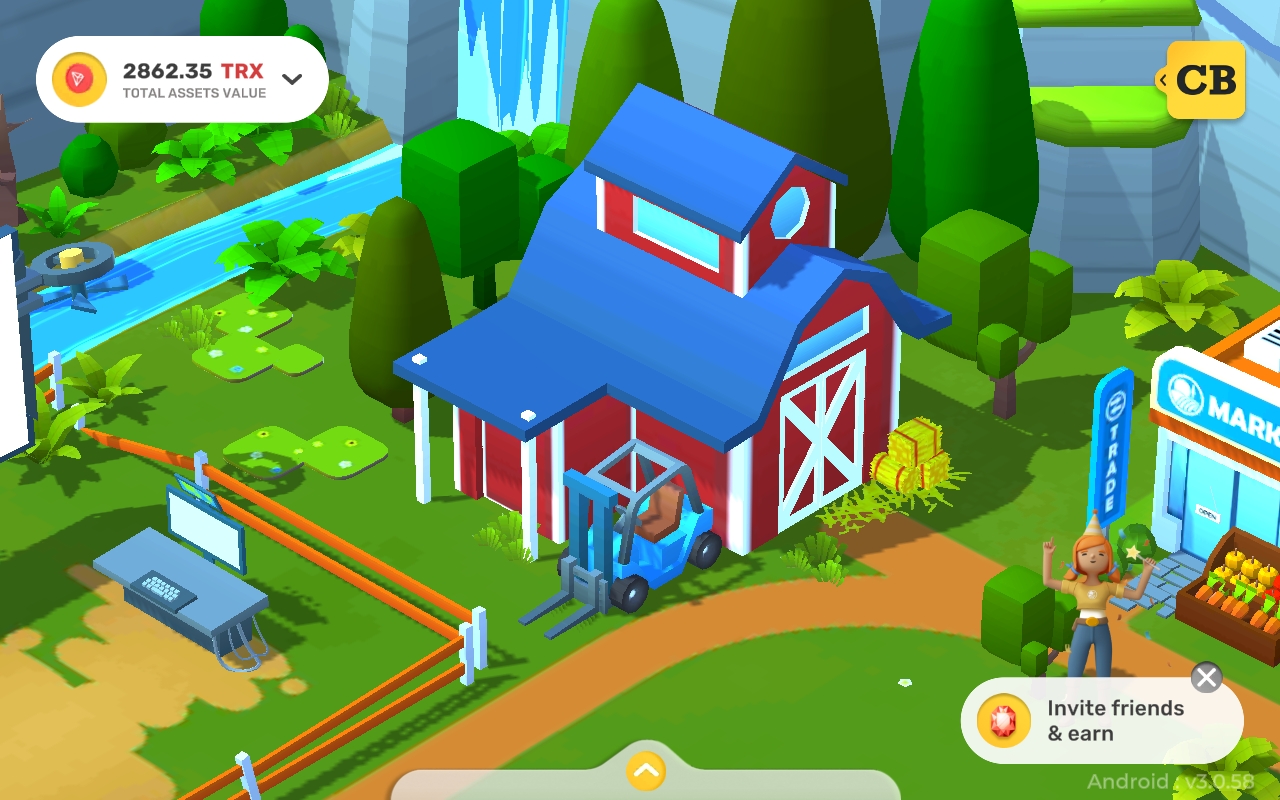 On January 20th, CropBytes, the four-year-old metaverse farming game, is launching the brand new terrain with immersive 3D graphics. The new version upgrade greatly improved the already cute graphics of the game and brought a fresh feeling that adapts to the latest game aesthetics on mobile devices. What’s more, it keeps all the fun!

The farm simulation game CropBytes was launched in 2018 and has quickly become one of the most immersive crypto gaming experiences with a global game community, surpassing 400,000 organic downloads. The NFT game is available on both the Apple and the Google app stores for Android and IOS users.

CropBytes gameplay is a simple but intricately designed playscape ripe for creating a stable & sustainable economy. For the team behind the game, it was essential to focus on sustainable economics, which helped build a long-term game for crypto players. CropBytes was created with an emphasis on the economics of the game beyond the bull run. Most NFT games suffer from liquidity crisis and asset inflation, but this was kept in mind for CropBytes & addressed early on in the game economics.

Playing the game is very straightforward, and CropBytes comes with many features for its players, including – having a balanced economy, real ownership, open-market trading, and utility-based gaming, amongst other features being developed for the future.

According to the Roadmap for Q1 2022 there are fascinating features like staking, tokenisation, and lending, which are believed to grow the game to wider audiences. The roadmap is focused on guild economy; the players start the game with proof of game concept, unlike other games.

Mining of CBX is already live in the game, with more exciting uses of CBX coming into the future. The token is already listed on ByBit, Mexc and Uniswap. Holding CBX means investors are a part of the CropBytes metaverse, which is built to grow throughout and for years to come. The super rare Superhero NFT asset mining has also started in the game. 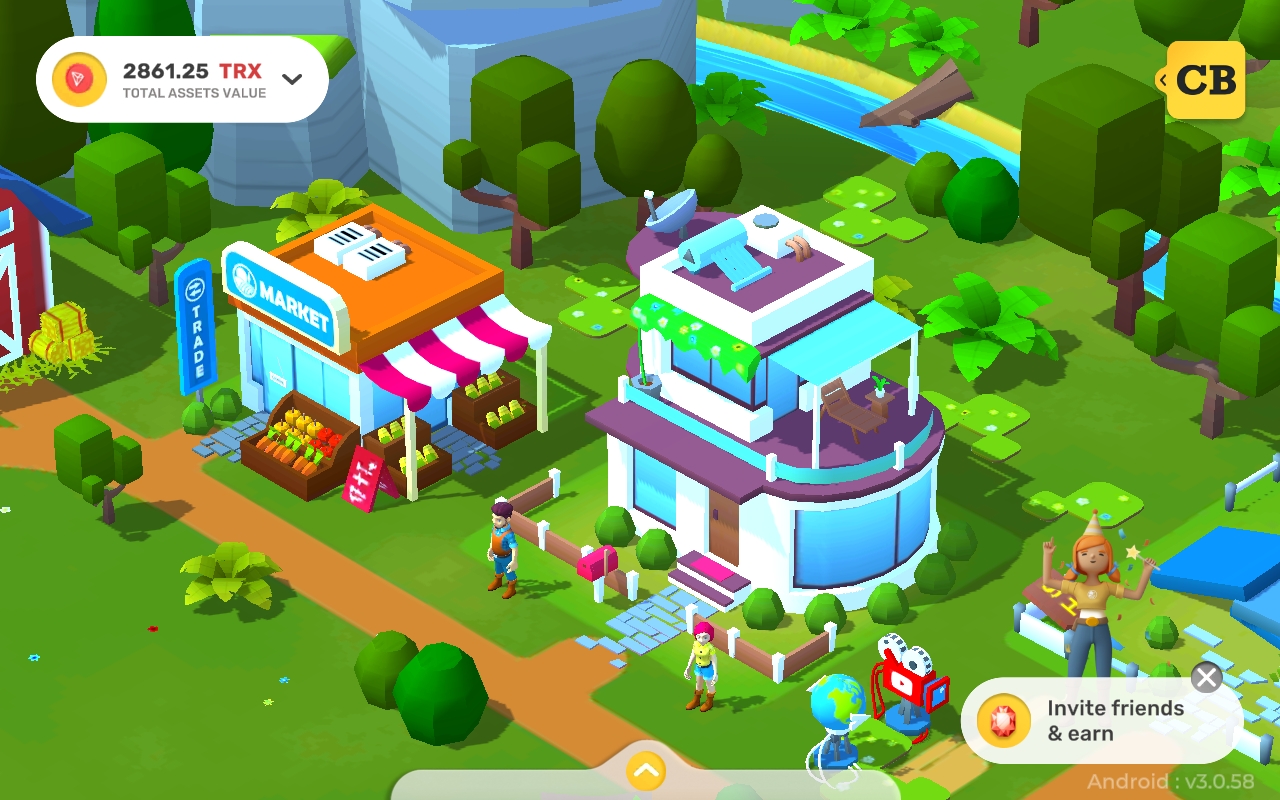 CropBytes is a four-year-old metaverse game that provides the unique farming experience for hundreds of thousands of players around the world. Farming simulation is now a long-lived game genre. The uniqueness of CropBytes is that it not only provides the essential fun experience of farming, but also includes asset ownership as the main GameFi mechanic which empowers farm owners to monetize their investment of time (and love) and receive crypto financial gains.

My game experience in the CropBytes started with the previous version on a reclusive and boutique farm land of my own, surrounded by breathtakingly beautiful snowy mountains. It was winter time. The silver forest and frozen lake formed the boundary of my farm. Pure white snowflakes fell silently from the tranquil sky and covered everything in white. Santa in his reindeer-led sleigh was my only visitor. This was my farm in the winter. I couldn’t wait to see how the scenery changes when the seasons alternate. For me, this version was already very 3rd dimensional. That’s why I was surprised to hear that there was a brand new version with even better graphics.

On the first day of my farming life, I deployed all my assets, which include animals and their sheds, plots of land for farming, crop seeds, and wells. What I found very convenient in CropBytes is that the game provides ready-sorted packs of digital assets, ranging from small, medium to large. Each pack contains a few farm animals, land, seeds, water and (in the large pack) farming tools for novice farmers like me to have an easy start. All of the digital assets can be purchased in the little market booth with TRX. CropBytes also has its own crypto coin, CBX. A large pack containing all the necessities to kick-start the farm costs 360 CBX, around 81 USD at the moment. In the CB Shop, I discovered very sophisticated-looking wind turbines and the excitement lasted until I found out that it is now worth over 5,000 USD… I wish I joined the game two years ago! 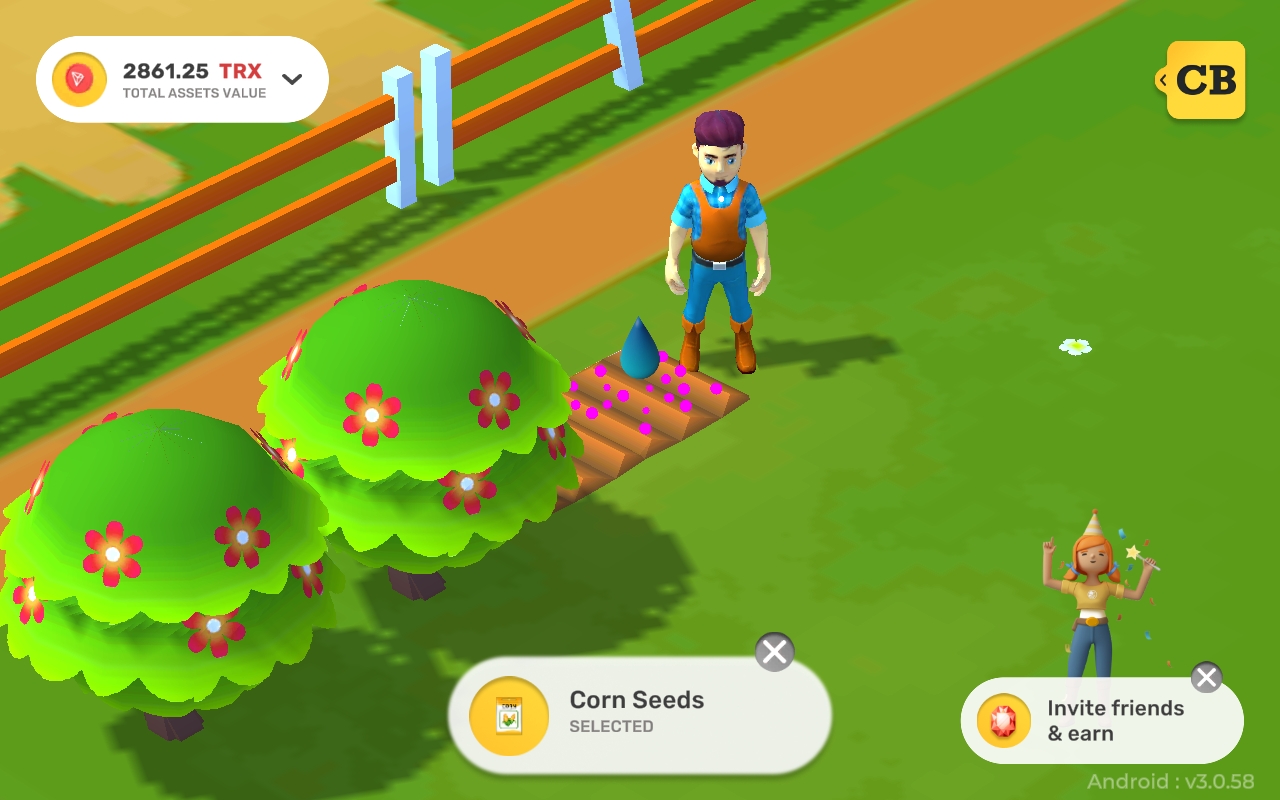 When I got the opportunity to play with the new 3D terrain a few days before the official release date, I installed the game on my tablet. The new version kept all the classic game elements and the cozy fun from the previous version while renovated the entire farm to make it look a lot more appealing and mobile device-friendly. What’s more important, the new terrain seamlessly transferred all my game data and keeps my farm tidy and neat as it used to be.

The day-to-day life of a farmer in our dimension could be very exhausting and intimidating. But the digital farmer’s life in the metaverse is way much easier, thanks to the impossibility of generating manure order or scorching sunshine on Web3. When the iconic background music started to roll, I know that I’m back on my little lovely farm, and everything looks fabulous. When a large part of our world is still moving slowly in the winter, I’m so thrilled to see that my farm in the new version already entered spring.

The work on the farm varies from harvesting crops, feeding animals, to grinding crops to make feed. In the new version, I can easily get a more close-up look at my character while he performs all the farming chores such as irrigating and sowing. 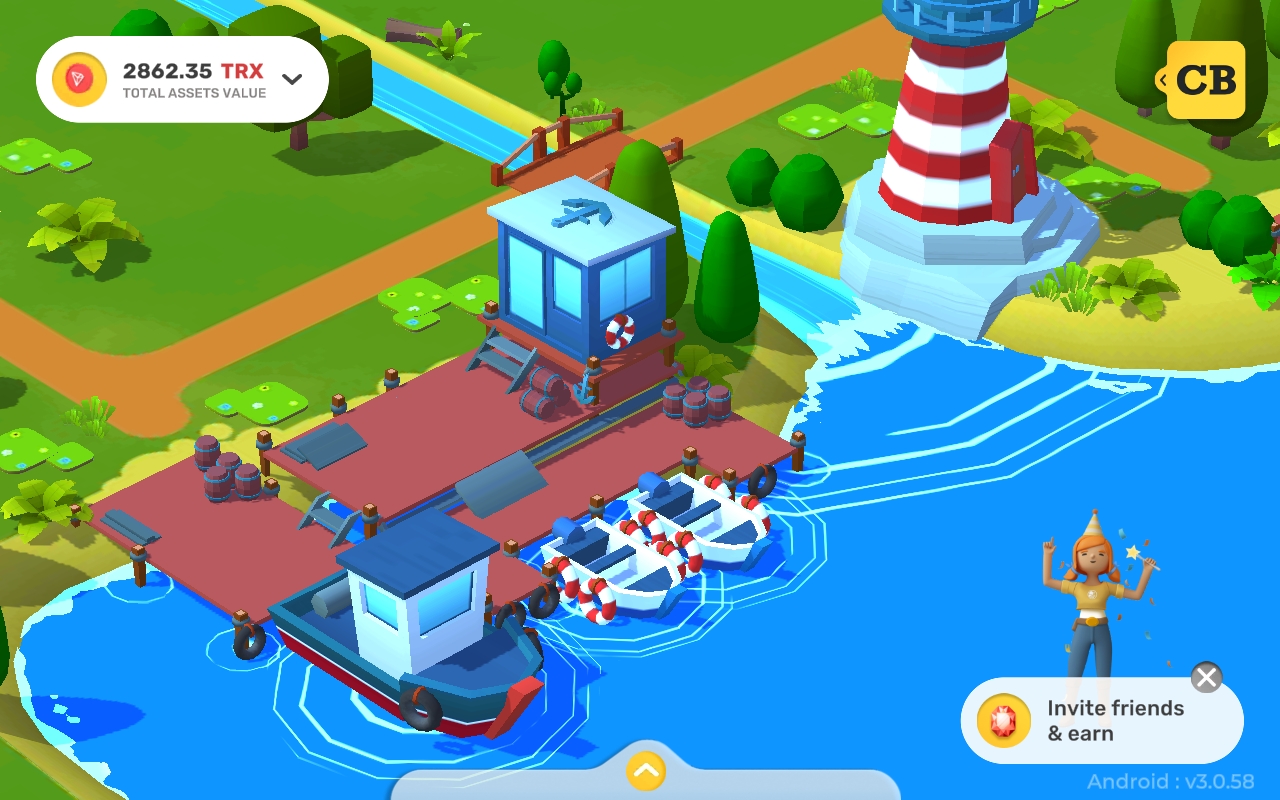 For veteran players who have already accumulated a fortune in the game by trading their harvested assets, there are a lot more that can be done on the farm. In addition to the farming animals that we are familiar with, CropBytes released a set of superhero animals which can be traded. Superhero animals have their own food which can be grinded. There are also recipes to make breed food for those who is interested in breeding new superheroes.

When the new version is released, I rushed to the market to check if there are new items on the shelf. And yes! Without spoiling the full fun, it’s great to mention that on top of the original superhero collections, new superheroes are created which can be later used in battles. The previous version already included the social aspect where players could invite friends and mark their farms on the global map. A peer-to-peer superhero combat will bring an additional level of social connectivity. I’m very much looking to try that out. 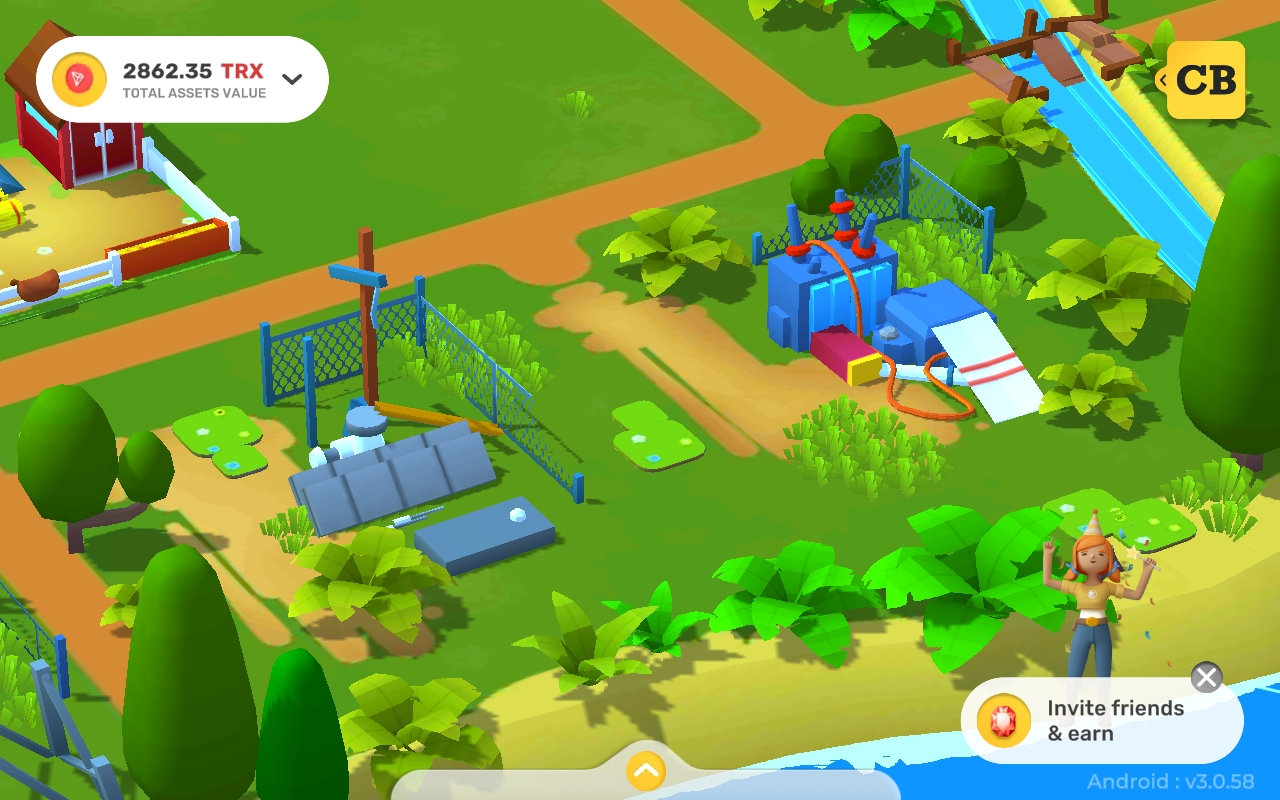 Selling Digital Produce and Other Ways to Earn Crypto

After a few days of harvesting, I accumulated a very humble number of eggs and milk. It was time for me to explore the functionality of trading these assets. Although it’s not a lot as a beginner with minimum investment, the experience was quite fun.

The trading, or to be more specific, the selling process might seem a bit complex to beginner explorers of blockchain games. Once an asset (such as eggs) have been selected from the inventory to trade (usually requires a minimum of 25 units to participate in the selling), a trading page will open up which displays the order book of recent trades and the market trends. Select the asset that needs to be sold, place the correct amount and set the right price which you believe is reasonable, then press sell. 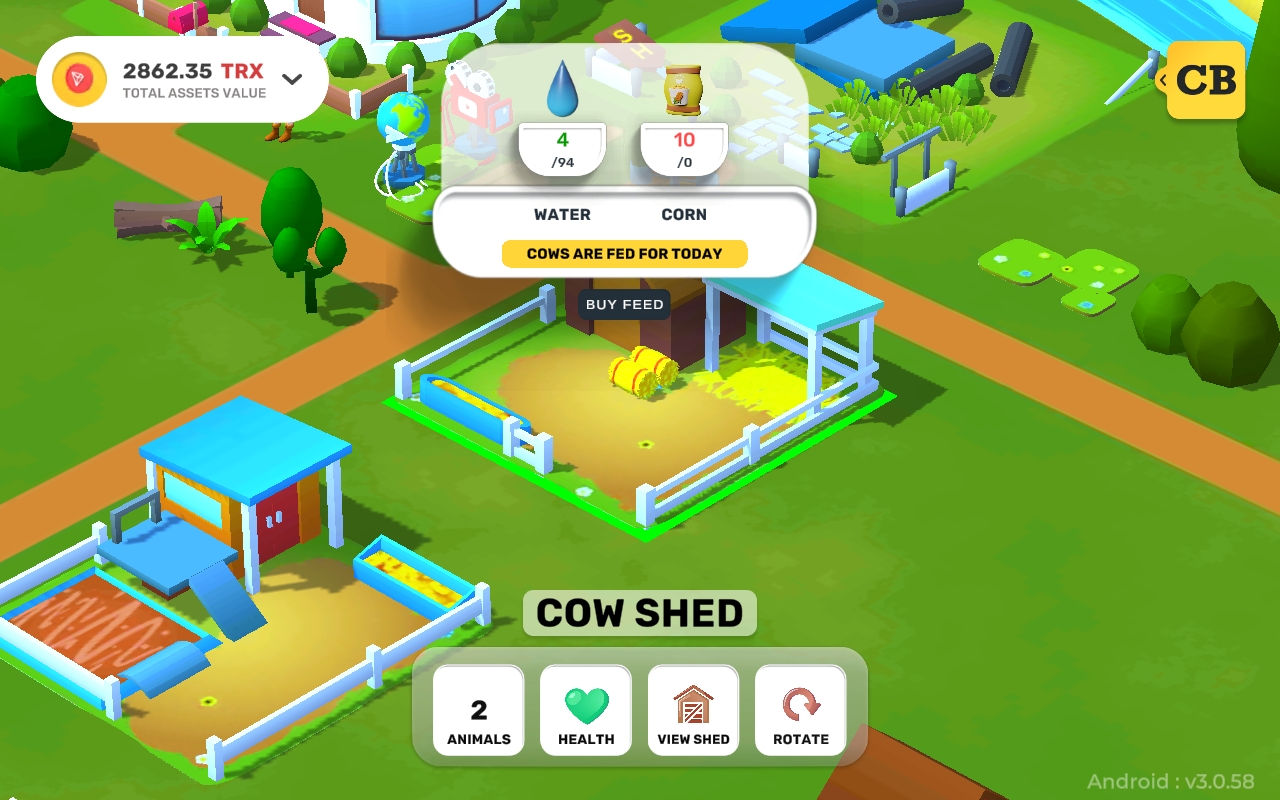 Selling assets that are harvested on the farm is definitely not the only way that players can generate revenues. CropBytes designed multiple ways for players to experience different types of work on the farm and diverse ways to make money. For instance, deploying wind turbines and solar panels can generate energy on the farm which later can be converted to TRX. Buying and setting up a feed mill will allow the farm owners to grind crops for co-players and get an additional TRX income as well. 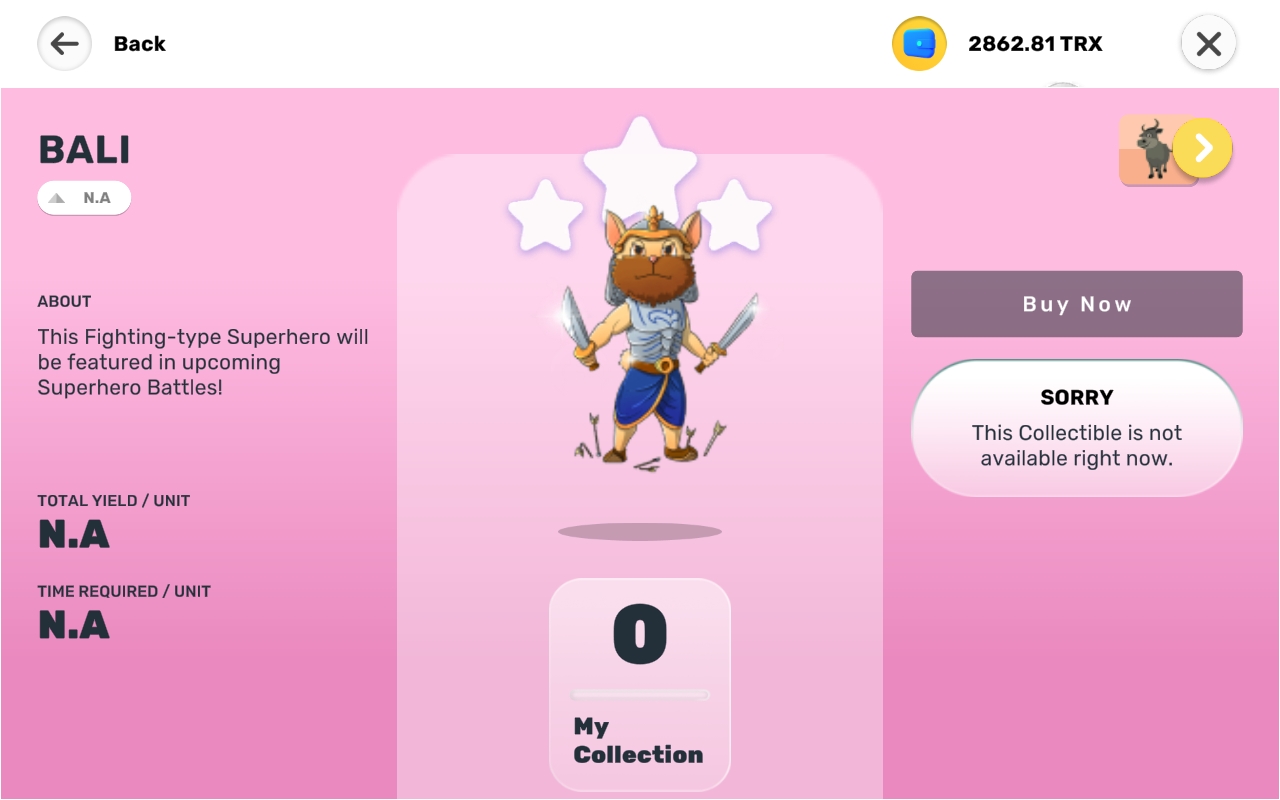 What would you like to grow and trade if you have a farm in the metaverse game?