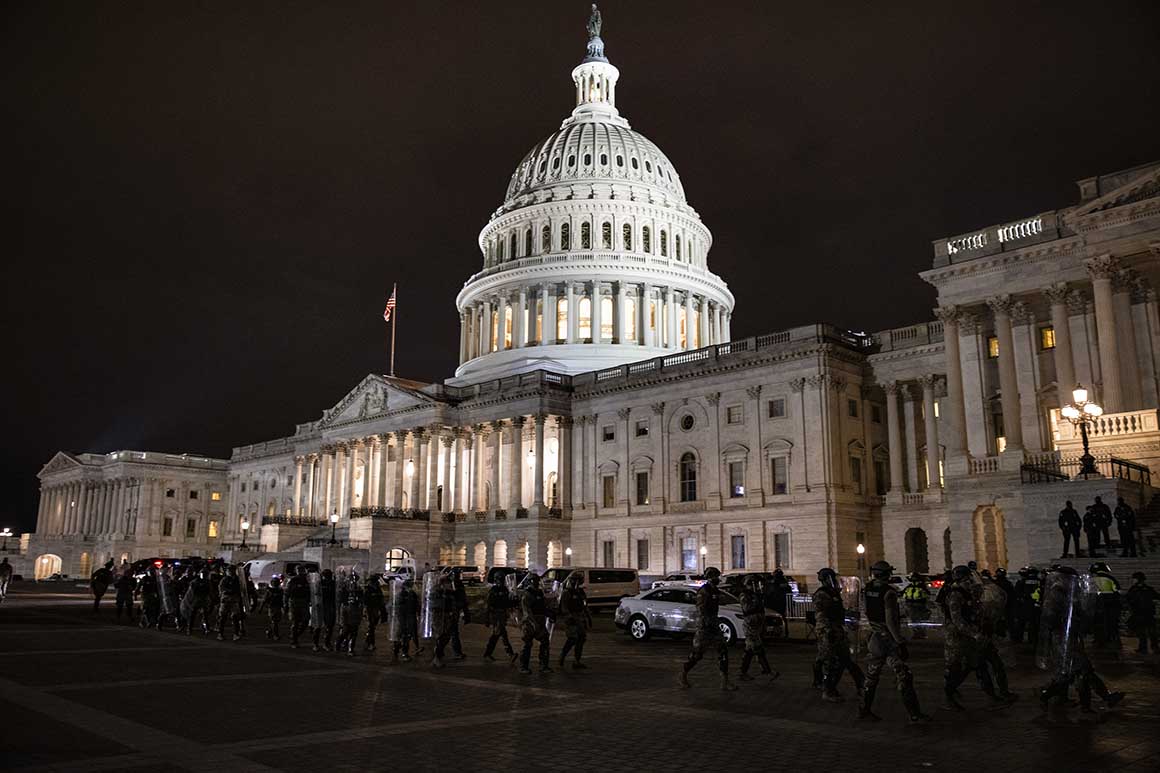 Traditionalist Republicans breathed a sigh of relief when Donald Trump canceled his Thursday news conference, then another when the GOP in Georgia’s Cobb County called off its planned vigil for people charged in the Jan. 6 riot at the Capitol.

But every indication is that the reprieve will be fleeting.

Exactly one year after one of the darkest days in American democracy, the image the party will convey is not an exemplary one. Across the country, Republican activists are still planning rallies and vigils in more than a dozen states for Jan. 6 participants they depict as “patriots” or “political prisoners.” Stars of the party’s right-wing are lining up to appear on conservative media in a day of counter programming designed to downplay the seriousness of the attack on the Capitol. Trump himself will be back behind a microphone next week in Arizona, where he will repeat his lie that the election was rigged.

Trump’s baseless claims about the outcome — and the idea that the Jan. 6 riot was something other than a violent assault on the halls of government — are no longer fringe elements of the GOP, but part of its DNA.

Fully two-thirds of Republicans say they don’t view the riot at the Capitol as an attack on government, according to a Quinnipiac University poll. And though Republicans largely disapprove of the actions of those who forced their way into the Capitol, according to a CBS News poll this week, they were more likely to describe what happened that day as an act of “patriotism” or “defending freedom” than an insurrection.

“Extremism has become somewhat mainstream inside the party now,” said Michael Brodkorb, a former deputy chair of the Republican Party in Minnesota, where Republicans are hosting a vigil for Jan. 6 defendants in rural Aitkin County. “What has occurred over the last few years is that the party apparatus has been soiled a bit by a very extremist, militant element inside the party that is just simply dangerous.”

He said, “It’s becoming harder to distinguish these people from the rank-and-file members … It’s just appalling. And it should be scary.”

Today’s anniversary of the riot will serve as a marker for the GOP’s revisionist casting of the event. In Clearwater, Fla., one Republican officeholder, state Rep. Anthony Sabatini, will be among the featured speakers at a “One Year Rally for Our 1/6 Political Prisoners.” Sabatini said “99 percent” of protesters at the Capitol last year were “good and decent people who have done nothing wrong.”

“It’s about pushing back against a sick narrative that’s been created” by the media, said Sabatini, a conservative lawmaker and central Florida attorney who is running for Congress.

At least 57 individuals who actually played a role in Jan. 6 events — either by attending the Save America rally that preceded the riot, gathering at the Capitol steps or breaching the Capitol itself — are running for elected office this year.

In California’s Orange County, Nick Taurus, a long-shot House candidate who has likened Jan. 6 to a “modern-day Boston Tea Party,” said he expects a group of 20 to 25 people to join him in a protest supporting those who have been jailed. Republicans are planning a similar event in Minnesota, while Look Ahead America, a group founded by a former Trump campaign aide, is organizing more than 25 vigils in Washington, D.C. and 11 states.

“I’m trying to take action, because I don’t want to be a so-called keyboard warrior,” said Jennifer Cummings, the Republican Party activist who is organizing a vigil in Aitkin, Minn., and who described those jailed in the Jan. 6 riot as “political prisoners.”

Trump, Cummings said, is “only one guy. He can’t do all this by himself.”

In the modern, pro-Trump GOP, the former president won’t be by himself in his Jan. 6 denialism this week — not even close. In an op-ed on Fox News on Wednesday, Sen. Josh Hawley, the Missouri Republican and potential presidential candidate, wrote the “true legacy” of Jan. 6 is “the Left’s attempt to use the Capitol unrest to foster a permanent climate of fear and repression.”

Two Trump loyalists in the House, Reps. Matt Gaetz of Florida and Marjorie Taylor Greene of Georgia, will offer “a Republican response to expose the truth about the January 6, 2021 protests“ on Capitol Hill Thursday afternoon. Before that, they’ll appear on a special edition of Steve Bannon’s podcast. Bannon, the former Trump campaign strategist, has used his “War Room” podcast to amplify Trump’s claims that the election was stolen.

The riot-related vigils and rallies may fizzle. In September, a rally at the Capitol in support of people charged in the riot failed to meet expectations, drawing only a small crowd. What is more revealing, however, is that there’s been no widespread condemnation of the vigils, or chastening of Trump by the Republican Party’s apparatus in Washington or in the states.

Trump, who had been expected today to rebuke the Jan. 6 select committee investigating Trump’s effort to overturn the result of the 2020 election, blamed “the total bias and dishonesty” of Democrats and the “Fake News Media” for his canceling of the news conference.

In Georgia’s Cobb County, in Atlanta’s vote-rich suburbs, the local Republican Party called off its “Candlelight Vigil for ‘J6’ Patriots held in DC Prison” due to what it said was a “mischaracterization of the event.”

“All those who would have been in attendance are encouraged to keep those families who suffered a loss of loved ones, along with the pre-trial prisoners held in DC in inhumane conditions in thoughtful prayer,” the party said in a statement. “It is our fervent hope that all those who committed unlawful acts against our Nation’s Capital are brought to swift justice.”

After Cummings posted about her Aitkin County vigil on the local GOP’s Facebook page — believing mistakenly, she said, that it was a private group — the co-chairs of the party, John and Pat Turonie, said it was not an officially sanctioned event. But they did not denounce it.

For Republicans who are poised to retake the House in this year’s midterm elections, the anniversary of the Capitol riot is a potentially disastrous distraction. With the coronavirus pandemic still raging and Biden polling miserably, House Republican leaders encouraged members this week to keep their focus on Biden.

“The re-litigation or the whitewashing and the attempt to create logic and rationale around the behaviors of those involved in the 6th, in my mind, is unbelievably corrosive to our brand and our ability to win in November,” said John Watson, a former Georgia Republican Party chair.

Fearful that focusing on Jan. 6 would invite suburban and swing voters to identify the GOP with a “lunatic fringe,” he said, “So long as we have [Democrats] talking about their agenda, we win. If we pivot and exhibit to everyone, ‘Hey, we don’t give a shit about the issues, all we care about is rationalizing January 6th,’ then in my mind, we’re screwed.” 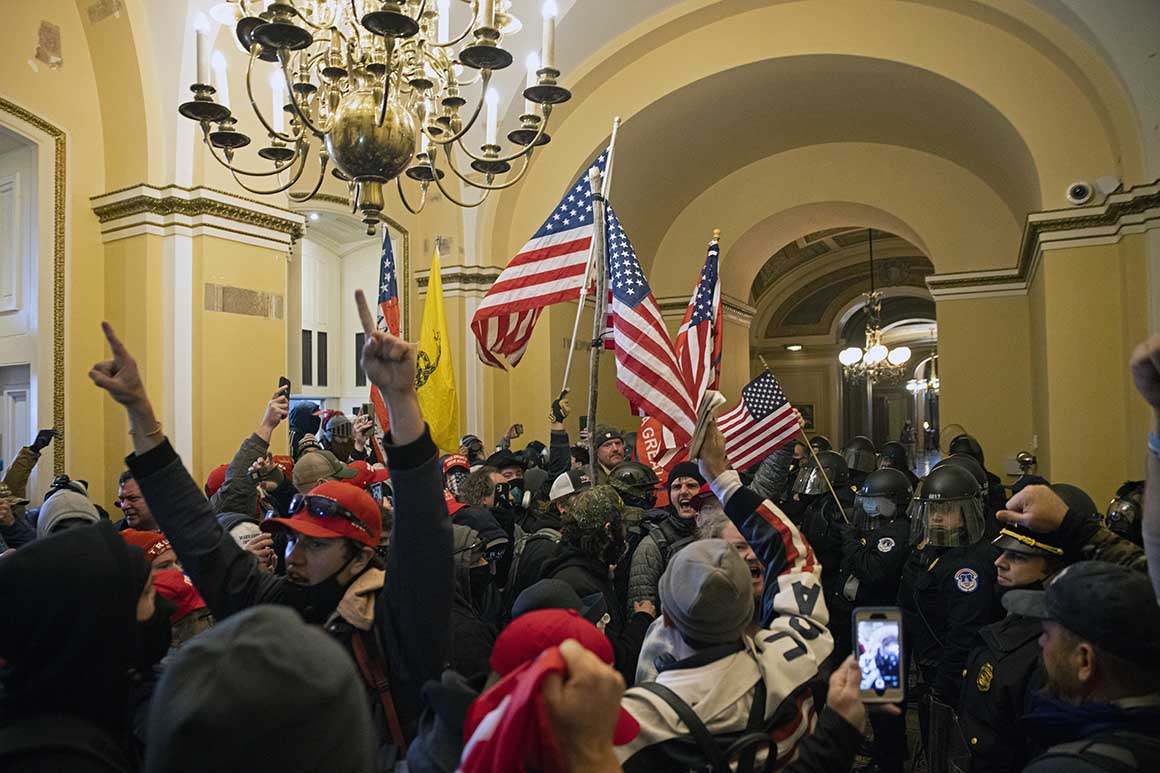 Thomas, who is working on races in 10 states, said he advises clients to “dodge the question” if they are asked about Jan. 6, pivoting “to the broader question of election integrity.”

Yet there are signs everywhere that may be impossible, especially in a midterm landscape in which Trump is inserting himself heavily in primary contests. Nearly three-quarters of Republicans still believe Trump’s baseless claim that Joe Biden won the presidency due to voter fraud, according to a Monmouth University poll — a belief that is hardening into a litmus test in GOP primaries.

In a debate among Republican primary candidates for governor of Minnesota last month, Hugh Hewitt, the conservative talk radio host, asked each of five candidates if they believed Biden won the 2020 election. None of them would say Biden won it fairly, while one, state Sen. Michelle Benson, encouraged Republicans to become poll watchers and election judges.

“The more we watch, the less they cheat,” she said.

“In the eyes of a lot of Republican activists, Donald Trump is the duly elected president of the United States, and these were patriots,” he said. “They want to turn these people with bear spray, they want to turn these Q-Anon supporters into Paul Revere … Until the party makes a clean break from this, this is going to be a problem.”