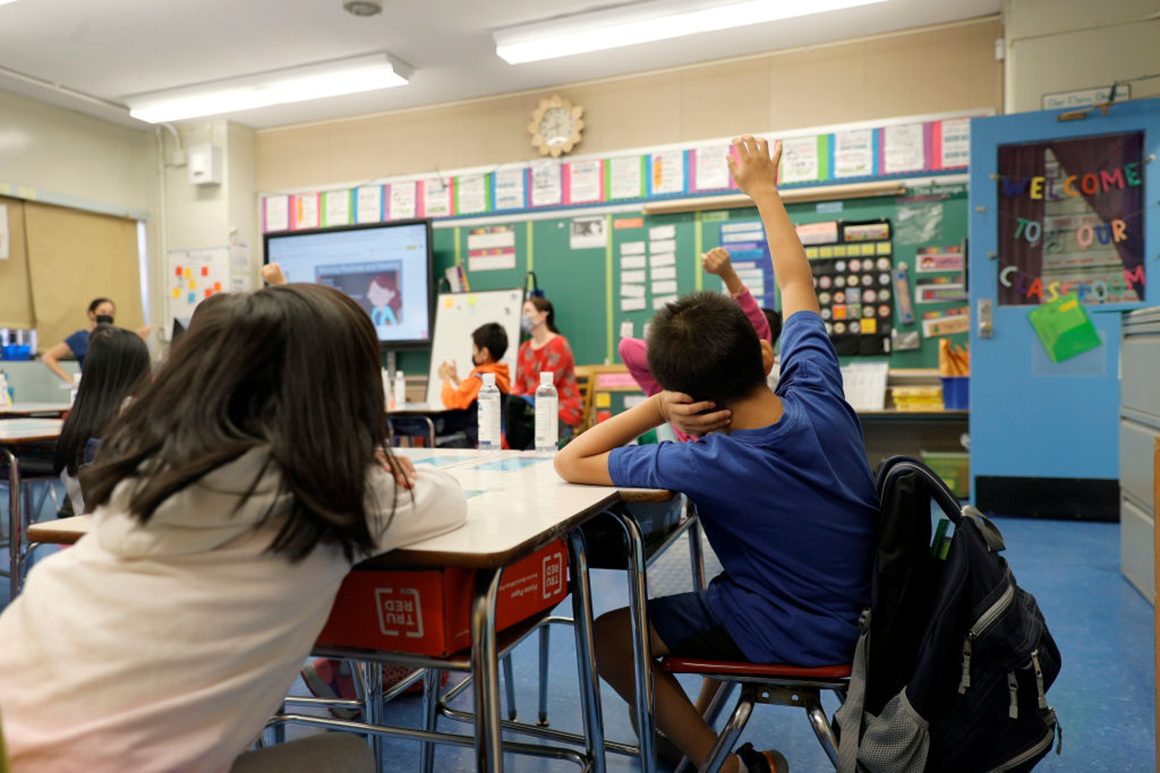 Missouri state Rep. Brian Seitz has one clear priority for the 2022 legislative session: “Shut down” critical race theory in his state. He intends to do that by passing a bill that would forbid public school teachers from discussing critical race theory, an examination of how race and racism permeates American society.

In South Carolina, a bill lawmakers may consider in coming months would require K-12 public schools to post online detailed lists of instruction materials and curriculum. Another bill would go a step further by banning any state-funded entity like colleges, private contractors and nonprofit organizations from promoting “certain discriminatory concepts.”

And in Florida, Republican Gov. Ron DeSantis is urging the GOP-led state Legislature to pass a measure that would allow parents to sue school districts that teach lessons rooted in critical race theory.

Attacking the study of racism in the United States emerged as a leading culture war cause for Republicans in 2021. But state lawmakers have only just begun focusing on the issue, which promises to dominate red-state legislatures across the country this year.

Legislators in at least a dozen Republican-controlled statehouses — including in Alabama, Kentucky, North Carolina and Ohio — plan to push dozens of bills in upcoming legislative sessions that aim to halt teachings about race and society and give parents more say in what’s discussed in classrooms.

There’s a clear power incentive: Republicans are amped up by the party’s November election sweep in Virginia, where education was a top issue, and intend to campaign on such bills leading up to the midterms.

“There is a huge red wave coming,” Seitz, a pastor and business owner, said in an interview. “Virginia is just a microcosm of the rest of the United States.”

Critical race theory is an analytical framework originally developed by legal scholars examining how race and racism have become ingrained in American law and institutions since slavery and Jim Crow. Many conservatives began using critical race theory as shorthand for a broader critique of how race and social issues are being taught in the K-12 education system.

Their criticism centers on the belief that white students are being told that they are oppressors because of their race. In turn, history lessons about the the founding of the nation that adopt some of the tenets of critical race theory promote discrimination against white students and depict students of color as victims, they argue.

Yet most public school officials across the country say they do not teach any curriculum based on the theory, even in districts and states where lawmakers are seeking to ban the practice. Some Democrats and other critics say the anti-critical race theory push is motivated by a deep fear among white conservatives about changing racial awareness in the U.S. and an unwillingness to grapple with how the legacy of slavery manifests today.

A major question is what sort of long-term impact these bills will have — whether they will end up being mostly symbolic acts to energize GOP campaigns or actually permanently transform what millions of students are taught.

Academics are concerned about the “chilling effect” these bills will have on teachers as Republican lawmakers “race to outdo each other to pass the most extreme legislation,” said Jeffrey Sachs, a professor at Acadia University who has been tracking these bills. He’s worried about teachers already making changes to courses and readings to avoid potential backlash from parents and in advance of any legislation being enacted.

Sachs said he believes people are “not taking the scale of this threat seriously” and it’s a mistake to dismiss parents’ concerns by denying that teachers are not changing the ways they teach about the persistence of systemic racism in the U.S. He pointed to former Virginia Gov. Terry McCauliffe’s comments during the 2021 gubernatorial race as the wrong approach. McAuliffe said that outrage over the theory is a “made up, racist dog whistle” that has never been taught in Virginia schools.

“One better response is to highlight how dangerous and extreme some of these bills are and the terrible consequences when teachers operate in a climate of fear,” he said.

Much of the action in statehouses last year focused on banning the teaching of certain “divisive” concepts in classrooms. The conservative vitriol was directed at the “1619 Project,” a major New York Times feature about the roots of American slavery that’s a popular target of the right and has drawn some questions from historians.

An Oklahama law enacted law year, which has served as the template for other states, bans teaching that anyone is “inherently racist, sexist or oppressive, whether consciously or unconsciously,” or that they should feel “discomfort, guilt, anguish or any other form of psychological distress” because of their race or sex.

Going forward, the legislative push will extend to not just seeking bans on certain teachings but to giving parents greater oversight of K-12 curriculum, politicize school board races and reject books that critics deem too controversial for young children to be exposed to.

And in some places, legislators also want to focus on public colleges and universities. A Wisconsin bill, for example, would ban employees from being required to attend trainings “promoting race or sex stereotyping.” Similar bills are pending in Alabama, Florida, Iowa and Kentucky.

Momentum for the legislative movement spun out from conservative think tanks like the Heritage Foundation, American Enterprise Institute and Goldwater Institute. Some groups have written sample legislative texts for state lawmakers, such as the Center for Renewing America, a right-leaning nonprofit created by Russell Vought, director of the Office of Management and Budget under former President Donald Trump.

The issue gained traction after several forces collided: Frustration among many parents over school closures during the pandemic and conservative backlash to the Black Lives Matter movement. With millions of students learning virtually from home, parents got a better glimpse inside classrooms — and some were unhappy with what they saw.

Tennessee was one of the first states last year to enact legislation of this kind, and the state’s Education Commission recently signed off on guidance that boosted the financial penalties against large school districts that violate the new state law.

It remains to be seen how many complaints the state will receive about alleged violations, but the board in November rejected the first one: an allegation from right-wing group Moms for Liberty that a literacy curriculum used by at least 30 school districts has a “heavily biased agenda” that makes children “hate their country, each other and/or themselves.”

The group’s specific concerns were about four books on subjects like the Rev. Martin Luther King Jr.’s March on Washington and Ruby Bridges, among the first Black children to desegregate all-white schools in New Orleans.

Rashawn Ray, a senior fellow at the Brookings Institution, said that this movement can be explained by some parents wanting to keep their children from learning uncomfortable truths about U.S. history, information that may then inspire students to push for racial equity by dismantling certain systems.

“Those are economic, social and cultural privileges that people who embody those white supremacist views don’t want to give up,” Ray said.

“We have hit an ideological civil war that has spilled over into the classrooms for our kids,” he said. “It’s the fight for the democratic future of America that’s going to control future elections.”

In Texas, county commissioners threatened to withhold federal CARES Act funding from two school districts over concerns about “inappropriate” books in school libraries. The funds were eventually released, but with the stipulation that the schools conduct a review of certain books. Those districts had already yanked 11 books after a yearlong review spurred by parents.

“It should be within the reach of a parent to say, ‘yes, I want to know not only what textbooks are being used, but I want to know what the topics are and I want to know what you are teaching my child,’” said Jonathan Butcher, an education expert at the Heritage Foundation. “Especially when it comes to the roots of American democracy and how we’re talking about racial issues.”

Proposed legislation in South Carolina expected to be considered on the House floor is partly the result of several parent groups formed last year that investigated course materials and found books in libraries they thought weren’t appropriate for some kids.

The bill, which explicitly bans teaching of the 1619 Project, would mandate that schools post instructional lists like books, papers and articles — and provide a means for parents to contact schools. It would also forbid school employees from being required to attend diversity training and prohibit teaching of certain “tenets” like “that any sex, race, ethnicity, religion, color, or national origin is inherently superior or inferior.” State funds may be withheld from schools in violation.

“Parents have been awakened all over the country,” said state Rep. Bill Taylor, the bill’s sponsor.

“The tendency of school districts and schools is to talk about parent involvement, but they’re not too thrilled when they get it — it’s sort of the attitude of ‘we know best,’” he said. “That attitude has to be broken down.”