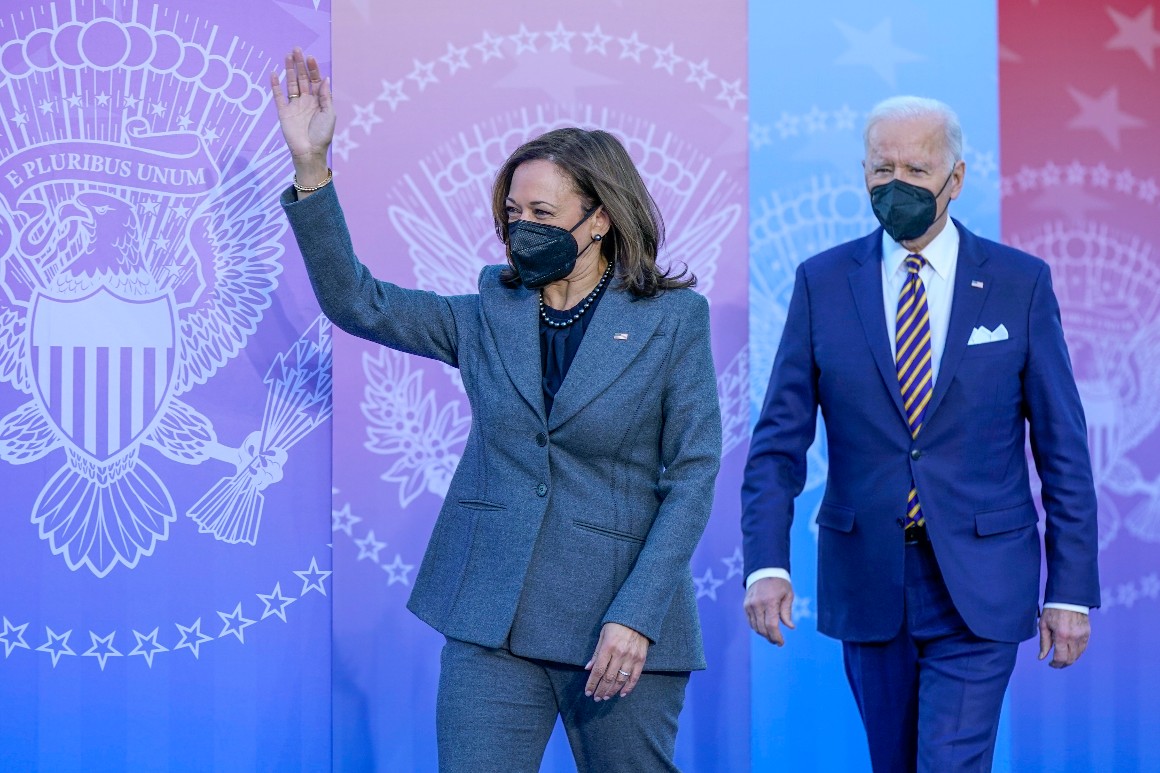 President Joe Biden and Vice President Kamala Harris on Tuesday delivered back-to-back speeches in the nation’s epicenter of the civil rights movement, urging Congress to pass voting rights legislation at a moment they deemed a turning point for democracy.

Speaking at the Atlanta University Center Consortium, on the grounds of two historically Black colleges — Clark Atlanta University and Morehouse College — Harris called on the Senate to pass the John Lewis Voting Rights Act, aimed at restoring key parts of the 1965 Voting Rights Act, and the For the People Act, intended to expand ballot access, among other provisions.

“The assault on our freedom to vote will be felt by every American in every community in every political party. And if we stand idly by, our entire nation will pay the price for generations to come,” Harris said, warning that it is uncertain when there will be another opportunity to pass the legislation. “As Dr. King said, the battle is in our hands. And today, the battle is in the hands of the leaders of the American people, those in particular that the American people sent to the United States Senate.”

The vice president, who was tapped to lead the administration’s push on election reform legislation, talked about Martin Luther King Jr.’s legacy of fighting for the right to vote, and that of Lewis, the Georgia congressman and civil rights icon who died in 2020.

Biden took the stage second and followed with a pointed message for GOP lawmakers, at the state and federal level. Often using Georgia as an example, he condemned Republican-led laws “designed to suppress your vote, to subvert our elections.”

“The goal of the former president and his allies is to disenfranchise anyone who votes against them. Simple as that. The facts won’t matter. Your vote won’t matter. They’ll just decide what they want, and then do it. That’s the kind of power you see in totalitarian states. Not in democracies,” Biden said, warning that “the battle for the soul of America is not over.”

The president called on the GOP to join Democrats in supporting the voting and elections reform bills, reminding Republicans that reauthorization of the Voting Rights Act has historically been done through bipartisan agreement. “I’ve been having these quiet conversations with members of Congress for the last two months,” the president said. “I’m tired of being quiet.”

Tuesday’s speeches from Biden and Harris are timed up with Senate Democrats’ moves on Capitol Hill, as Majority Leader Chuck Schumer is expected to force another vote on an elections reform bill as soon as this week. Schumer has repeatedly said that if Republicans block the bill, as expected, he will launch a movement to change the filibuster rules by Jan. 17, Martin Luther King Jr. Day.

Some Senate Republicans are currently negotiating with a small number of Democrats in the upper chamber about potential changes to the Electoral Count Act, an 1887 law that lays out the process for certifying the presidential election results. The White House has said Republican cooperation on such changes would not deter their larger effort.

While Biden made clear Tuesday that the only way to protect the right to vote and ensure election security was to pass the two bills, he acknowledged the strong Republican opposition standing in the way. He said he supports changing Senate rules, describing the filibuster as “weaponized” and “abused.”

“Sadly, the United States Senate, designed to be the world’s greatest deliberative body, has been rendered a shell of its former self. It gives me no satisfaction in saying that. As an institutionalist, as a man who was honored to serve in the Senate,” Biden said. “But as an institutionalist, I believe the threat to our democracy is so grave that we must find a way to pass these voting rights bills. Debate them. Vote. Let the majority prevail. And if that bare minimum is blocked, we have no option but to change the Senate rules, including getting rid of the filibuster for this.”

The president is working to rally support from moderates in his party such as Sens. Joe Manchin (D-W.Va.), Kyrsten Sinema (D-Ariz.) and others who have not committed to supporting the president’s notion to change Senate rules.

Biden didn’t mince words on Tuesday, asking lawmakers whether they wanted to be on the side of King or George Wallace, Lewis or Bull Connor, and Abraham Lincoln or Jefferson Davis. “This is the moment to decide,” the president said.

“The question is, where will the institution of the United States senate stand? Every senator, Democrat, Republican and independent will have to declare where they stand — not just for the moment but for the ages,” Biden said during his speech. “History has never been kind to those who sided with voter suppression over voters’ rights, and it will be less kind for those who side with election subversion.”

His remarks on Tuesday could be considered a second act to his fiery speech on the first anniversary of the Jan. 6 attack on the Capitol, in which he tore into former President Donald Trump and his allies for holding “a dagger at the throat of America” and implored Americans to “stand for the rule of law, to preserve the flame of democracy, to keep the promise of America alive.”

One attendee, the NAACP’s Johnson, called Biden’s speech stirring. Echoing cries from activists leading up to the president’s speech, he said it was time for the administration to “match their words with actions, and for Congress to do their job.”

“Voting rights should not simply be a priority — it must be THE priority,” the statement said.