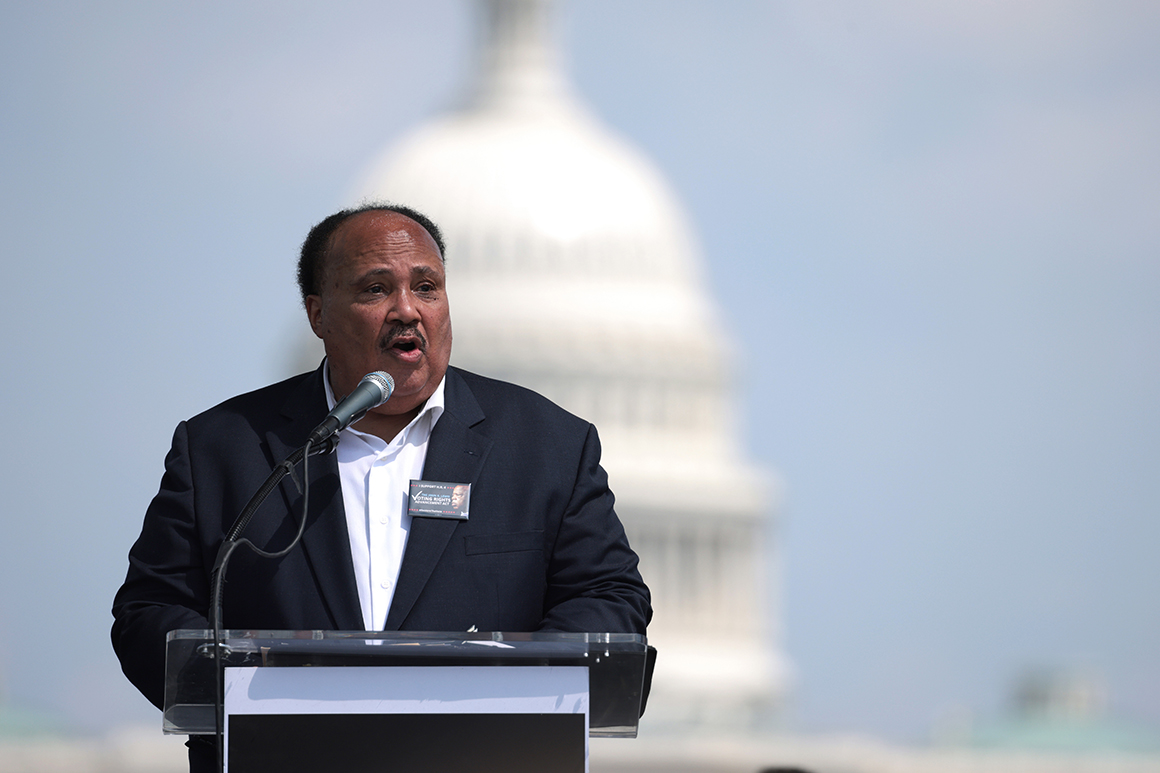 Martin Luther King III and his wife Arndrea Waters King acknowledged Tuesday that it was a “difficult decision” for them to attend President Joe Biden’s upcoming speech on voting rights, an event several high-profile activists are skipping because of what they view as the White House’s inaction on the issue.

“We certainly understand the frustration of our local partners here in Georgia,” Arndrea Waters King told MSNBC in an interview. “It’s been a long year of a lot of things not being done, and we stand and we share that frustration.”

Biden and Vice President Kamala Harris are scheduled to speak Tuesday afternoon at the Atlanta University Center Consortium — on the campuses of two historically Black colleges, Clark Atlanta University and Morehouse College — where they will push for the passage of two federal voting rights bills that remain stalled in the Senate.

But a number of voting rights activists have declined to attend Biden’s speech, which the White House has underscored as evidence of the president’s commitment to reforming the nation’s voting laws following the one-year anniversary of the Capitol insurrection and in advance of the 2022 midterm elections.

Even Georgia gubernatorial candidate Stacey Abrams — one of the nation’s preeminent voting rights advocates and a Democratic Party star — will not attend Biden’s speech, citing a scheduling issue. Spokesperson Seth Bringman said in a statement that Abrams “has a conflict and expressed her support” for the event already.

Biden also downplayed Abrams’ absence as he departed the White House for Atlanta, telling reporters: “I spoke to Stacey this morning. We have a great relationship. We got our scheduling mixed up. … We’re all on the same page.”

On Tuesday morning, the Kings said they had “been in communication” with the activists boycotting the event, including Black Voters Matter co-founder Cliff Albright. “We certainly share his position and understand their frustration. And they also expressed that they understand our position in coming to the table and expressing these frustrations directly to the president,” Arndrea Waters King said.

Martin Luther King III, the eldest son of late civil rights leaders Martin Luther King Jr. and Coretta Scott King, also suggested he was disappointed by how little the White House had accomplished to counter a wave of voting restrictions passed by several Republican state legislatures in the aftermath of the 2020 election.

“I don’t even understand how anybody would be against expanding and protecting the right to vote and preserving democracy,” Martin Luther King III said. “It’s a very sad position … where we are right now. And absolutely, I think that a lot of this should have already been done.”

Martin Luther King III went on to urge the White House to tackle the stalled voting rights bills with the same force Biden used to muscle a mammoth, $550 billion infrastructure package through Congress last year after months of back-and-forth negotiations.

“What we are saying to the president is, we need to see and hear today how you’re going to get these bills passed. … We want him to use his full weight,” Martin Luther King III said. “We know that the White House, when it really wants something done, they have a lot of influence that they can use. And that’s what we expect to hear and see.”

Spokespeople for the White House did not immediately return a request for comment on the Kings’ remarks.

In his address Tuesday, Biden is expected to take aim at Republican lawmakers in state legislatures and Congress who are blocking voting rights reforms. He also will cast the upcoming legislative battle as “a turning point in this nation.”

“Will we choose democracy over autocracy, light over shadow, justice over injustice?” Biden will say, according to an excerpt of his prepared remarks released by the White House. “I know where I stand. I will not yield. I will not flinch. I will defend your right to vote and our democracy against all enemies foreign and domestic. And so the question is where will the institution of [the] United States Senate stand?”

Prior to their speeches in Atlanta, Biden and Harris are scheduled to participate in a wreath-laying at the crypt of Martin Luther King Jr. and Coretta Scott King, and to visit the historic Ebenezer Baptist Church.

Myah Ward contributed to this report.