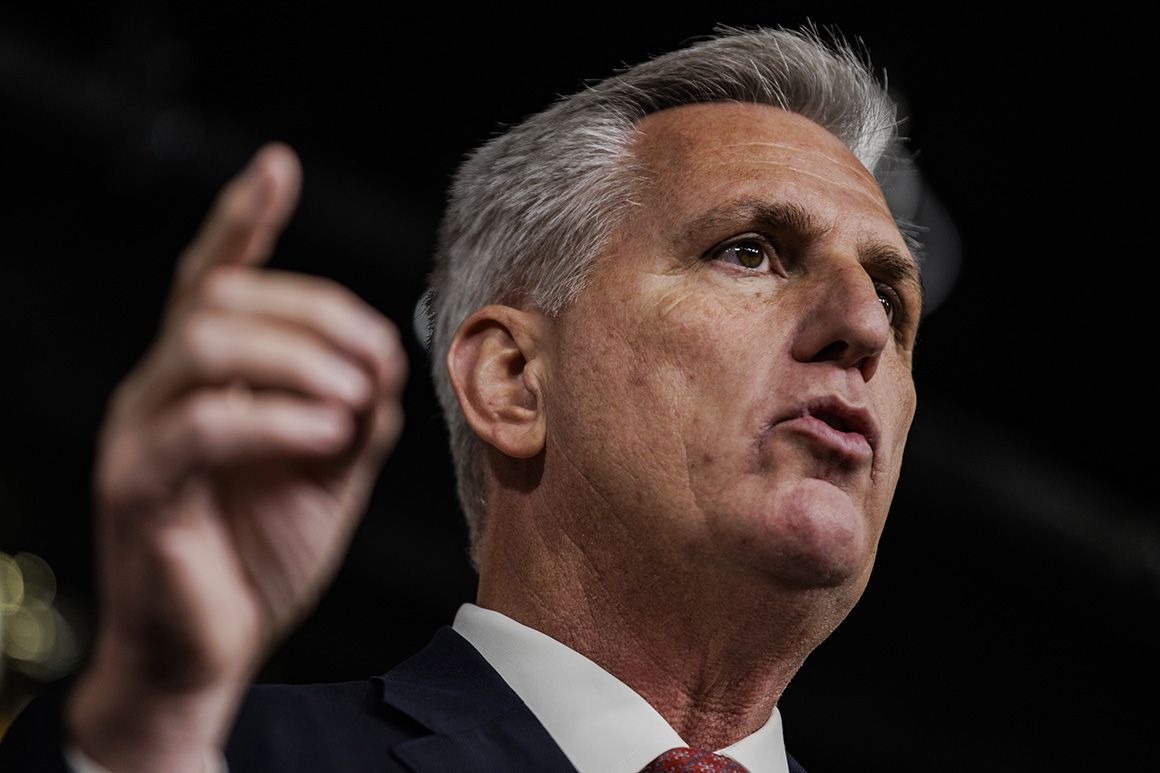 The Jan. 6 select committee has requested House Minority Leader Kevin McCarthy’s testimony about his interactions with Donald Trump as a mob swarmed the Capitol, describing it as crucial to understanding the former president’s state of mind.

In a letter to the GOP leader on Wednesday, Chair Bennie Thompson said the panel wants to know about the details of Trump’s phone call with McCarthy on Jan. 6, one the California Republican himself once described as “heated,” in which Trump initially downplayed the notion that his supporters were responsible for breaching the Capitol, according to some accounts.

When McCarthy asserted on the call to the outgoing president that it was Trump’s supporters who raided the Capitol, Trump replied: “Well, Kevin, I guess these people are more upset about the election than you are.” This account of the call was shared by Rep. Jaime Herrera Beutler (R-Wash.), who publicly revealed her conversation with McCarthy ahead of the impeachment proceedings last year. McCarthy has not disputed the account.

In a statement issued later Wednesday, McCarthy said he would not cooperate with the request.

“As a representative and the leader of the minority party, it is with neither regret nor satisfaction that I have concluded to not participate with this select committee’s abuse of power that stains this institution today and will harm it going forward,” he said.

Asked whether the panel would subpoena him to ensure his compliance, Thompson told reporters, “We will consider it.” McCarthy is the third GOP lawmaker the panel has requested to testify. The others, Reps. Jim Jordan (R-Ohio) and Scott Perry (R-Pa.), have rejected the committee’s entreaties. Both men were key allies of Trump as he sought to subvert the 2020 election results.

Thompson said the select panel is particularly interested in McCarthy’s changing tone around his characterization of Trump’s actions during the riot, adding that members intend to ask him whether Trump or his allies suggested “what you should say publicly during the impeachment trial (if called as a witness), or in any later investigation about your conversations with him on January 6th.”

In addition, Thompson said he was not aware whether the committee had obtained any of McCarthy’s text messages or banking records. McCarthy’s phone records were on an initial preservation request the committee sent to telecommunications companies at the outset of its probe.

Notably, the select panel has obtained a raft of text messages sent and received by Trump’s former chief of staff Mark Meadows, who briefly cooperated with its inquiry. The committee is also fighting the former president in court to obtain Trump White House call logs from the National Archives, a matter that’s pending before the Supreme Court.

McCarthy, who helped scuttle an attempt to establish a bipartisan commission to investigate the insurrection, has spent months thrashing the Jan. 6 committee. Speaker Nancy Pelosi rejected two of McCarthy’s initial picks to sit on the panel — Jordan and Rep. Jim Banks (R-Ind.) — deeming them too intertwined with Trump to be credible investigators. In turn, McCarthy withdrew his remaining three appointees and boycotted the committee altogether.

McCarthy also issued a thinly veiled threat to telecommunications companies that cooperated with the Jan. 6 committee’s request for lawmakers’ phone records, saying a GOP majority next year “will not forget” their decisions.

The panel proposed a Feb. 3 or Feb. 4 meeting, or a time the week after.

McCarthy has softened his tone toward Trump since the immediate aftermath of the Capitol riot. He initially said on the House floor that Trump “bears responsibility” for the violence, but within a six-month span had begun sidestepping such questions.

Some House Republicans who wanted Trump to be purged from the party blame McCarthy for bringing Trump back into a position of influence — particularly after the House GOP leader met with Trump at Mar-a-Lago just weeks after the attack. Trump loyalists in the House, however, welcomed the move.

McCarthy’s early post-insurrection criticism enraged Trump, who has at times lashed out at the lawmaker. But McCarthy has worked diligently to foster relationships with Trump and the former president’s allies in the House as he zeroes in on his goal to claim the speaker’s gavel in 2023, should Republicans retake the chamber.

The GOP leader has also offered varying responses when asked if he would testify. In May, he replied to a reporter’s question with a “sure.” At other times, he’s offered less clear responses.

In an interview with local California news channel Eyewitness News in late December, McCarthy was asked if he would testify before the Jan. 6 panel. He replied: “I don’t have anything really to add. I have been very public, but I wouldn’t hide from anything either.”

In its letter to McCarthy, the panel also disclosed a new text message from Fox News host Laura Ingraham to Meadows urging Trump on Jan. 12, 2021, to discourage supporters from bringing weapons to state Capitols.

“Remarks on camera discouraging protest at state capit[o]ls esp with weapons will be well advised given how hot the situation is. [E]veryone needs to calm down and pray for our country and for those who lost their lives last week,” Ingraham told the then-chief of staff.

The message came amid heightened fears that state Capitols were vulnerable to violent attacks in the aftermath of the Jan. 6 insurrection.

A Fox News representative did not immediately respond to a request for comment.