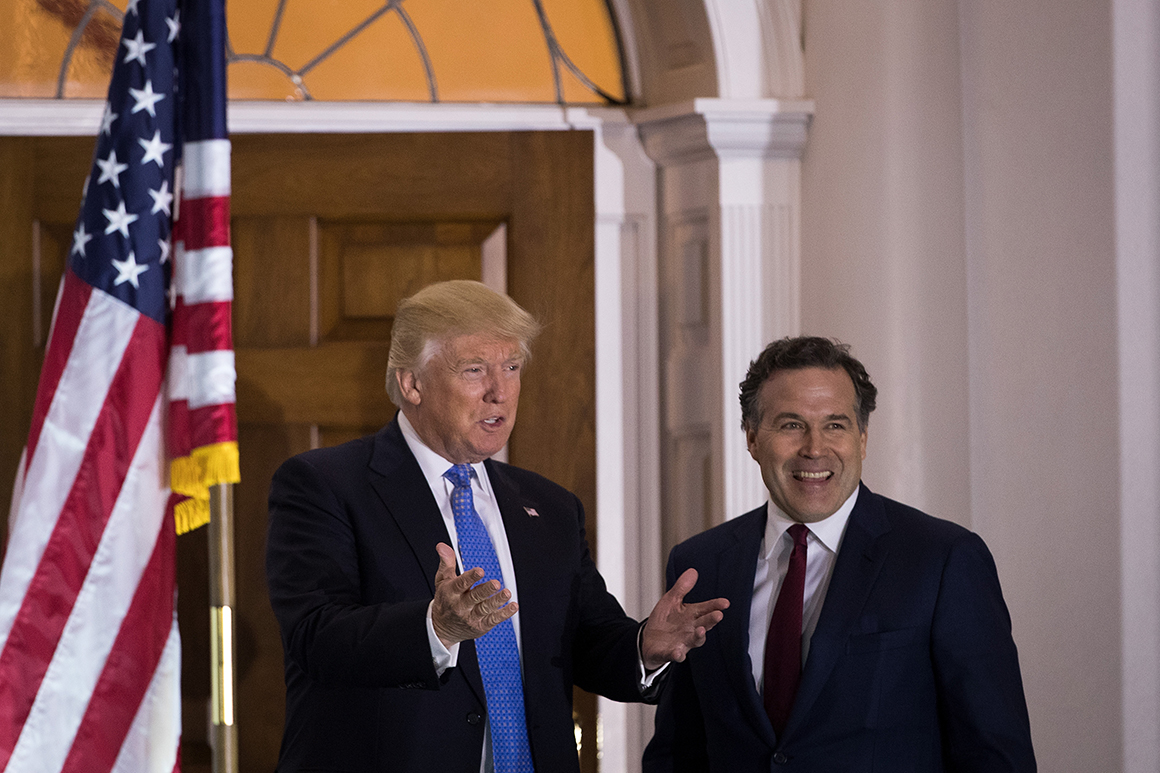 PHILADELPHIA — Dave McCormick has been quoted bashing populism, celebrating skilled immigration and even warning about the potential drawbacks of an “America First” mindset. A former hedge fund CEO, he’s overseen more than $1 billion in investments in China.

None of it is apparent from his Senate campaign website, which says people are asking him to run to represent “America First” values, a nod to former President Donald Trump’s battle cry.

As McCormick prepares to imminently enter Pennsylvania’s Republican contest for the Senate — a race in which candidates are outdoing each other to prove their loyalty to Trump — he is already making moves to inoculate himself from the all-but-certain primary attacks that he is insufficiently MAGA.

McCormick has built a campaign-in-waiting with a who’s who of Trump-world operatives, and distanced himself from his former company’s China ties, while his allies have reached out to Trump-friendly media. The question is whether that will be convincing enough in a state where Trump continues to have a strong hold on the GOP grassroots.

“He is a little more of a globalist than I would like,” said Gloria Lee Snover, chair of Northampton County’s Republican Party. “But a lot of Trump past employees are getting on with him and think he’s a great candidate. I love his life story — two parents were teachers, he grew up on a Christmas tree farm, and did the hard work — so I like that. But I’m still vetting.”

“I wasn’t particularly involved with the Trump camp — I wasn’t a Trump supporter,” he said at a 2017 event at Duke University, adding that he nonetheless wanted whichever candidate that won — Trump or Hillary Clinton — to be successful.

That isn’t the only remark that could come back to bite him in the primary: After the attack on the Capitol last January, McCormick said at a Bloomberg summit that Trump bore “a lot of responsibility” for the “polarization” and “divisiveness” of the previous four years. In the same interview, he complimented President Joe Biden, saying he “really appreciated Biden’s tone” about uniting the country, and called the news of some of Biden’s first appointments “encouraging.”

McCormick’s past remarks could threaten his chances of landing an all-important endorsement from Trump.

Last month, Trump watched the January 2021 clip of McCormick chiding Trump’s rhetoric, according to a person close to the former president. Trump at the time also reviewed a document outlining other comments McCormick has made, though it’s unclear who prepared the list and what was included in it.

The source said Trump didn’t have a strong reaction to learning about McCormick’s past statements. But unlike other Republicans who criticized Trump during the 2016 election, some of McCormick’s critiques are more current, which could work against him.

“The sliding scale is the more recent your insults have been, the more they weigh” to the former president, said the source close to Trump. “To that extent, it’s not great to be David McCormick today.”

“As a private-sector individual, you may say and have various comments that aren’t as thought-through maybe … but I don’t think there’s any chance that somebody like Dave McCormick, and I’ve known him for a while, would consider voting for Hillary Clinton’s policies versus Donald Trump’s policies,” said Rep. Dan Meuser (R-Pa.), a McCormick supporter. “And you know very well that his wife, Dina Powell McCormick, was in the Trump administration and a very strong supporter and ally to the president’s agenda.”

Asked about McCormick’s past comments, Jess Szymanski, a spokesperson for his exploratory committee, said he would work to restore Trump’s agenda “that made America great” if he runs for Senate. She also said McCormick voted for Trump in the 2016 primary, as well as in the general elections in 2016 and 2020.

“Dave McCormick is a decorated combat veteran that has put America first his whole career, and will continue to uphold these values should he run for U.S. Senate,” she said. “He has been tough on China during his time in both the public and private sector and supports President Trump’s strong immigration policies and foreign policy toward China.”

McCormick, a Gulf War veteran and former Treasury official in the George W. Bush administration, ran the hedge fund Bridgewater Associates until recently. He was recruited into the race by Republicans in Pennsylvania and Washington who were anxious about the state of the primary field in one of the most important Senate races in the nation this year.

Sean Parnell, an Army veteran, suspended his primary campaign in November after losing custody of his children amid claims of domestic abuse.

Supporters view McCormick as a candidate who can thread the electoral needle in Pennsylvania, a swing state that narrowly voted for Trump in 2016 and narrowly rejected him four years later.

In addition to the former Trump employees on his payroll, McCormick can note that he was interviewed for two top roles in the Trump administration: Treasury secretary and deputy secretary of Defense. (He was offered the Defense job, but turned it down.) McCormick has also moved to preempt attacks on him about China, saying on a company call last year that he disagreed with Bridgewater Associates founder Ray Dalio’s defense of the country. It was known at the time that he was mulling a run.

But that isn’t stopping Oz’s allies from going after McCormick for his past.

“It’s almost insurmountable,” said Rep. Guy Reschenthaler (R-Pa.), an Oz backer, referring to McCormick’s past comments on Trump, as well as business philosophies that the congressman argued were at odds with Trump’s “America First” agenda. He noted that McCormick will have to surpass Oz’s star power, adding that “it’s Santa Claus, Coca-Cola and Dr. Oz in a lot of American households.”

Oz himself has potential primary vulnerabilities, having defended abortion rights and “red flag” gun laws before running for Senate and reversing course.

At the 2017 Duke University event, McCormick said an America First economic policy could “potentially” undermine the country’s ability to build multilateral coalitions. In March, McCormick co-authored a paper for the American Enterprise Institute urging policymakers to do more to attract skilled immigrant workers. In a 2019 Pittsburgh Post-Gazette story, McCormick said populism was leading to “political extremes” that made it difficult to move the country and economy forward.

In the same interview, McCormick declined to say whether he supported Trump-imposed tariffs, noting it was important to properly “manage” the United States’ relationship with China.

“You just can’t get off the ground with anti-Trump comments,” Reschenthaler said. “I can’t even think of anyone who has been successful. It’s a political non-starter within the Republican primary.”

Trump has met with both Oz and McCormick, has friends working with both campaigns, and “is resolved to stay out for now,” the Trump source said. The former president’s hands-off approach to the contentious primary could change with time, though the departure of Parnell — the original candidate Trump endorsed in the Pennsylvania race — is still fresh.

Oz and Trump have been personal friends for years, and while Oz hasn’t hired an extensive team of Trump alumni, he has his own advocates talking him up to the former president. In addition to Oz’s longtime friend and Fox News host Sean Hannity — who frequently has Oz on his show — casino mogul Steve Wynn and former Trump Commerce Secretary Wilbur Ross are also promoting Oz’s campaign to Trump, according to a source familiar with the Oz campaign.

Snover, the county party chair, said she is deciding between supporting McCormick and Sands. On a recent call, she said she asked McCormick about his past positions on trade and other issues.

If Trump endorsed a candidate in the race again, Snover said, that would help her narrow it down: “It would be a factor, but not the only deciding factor.”