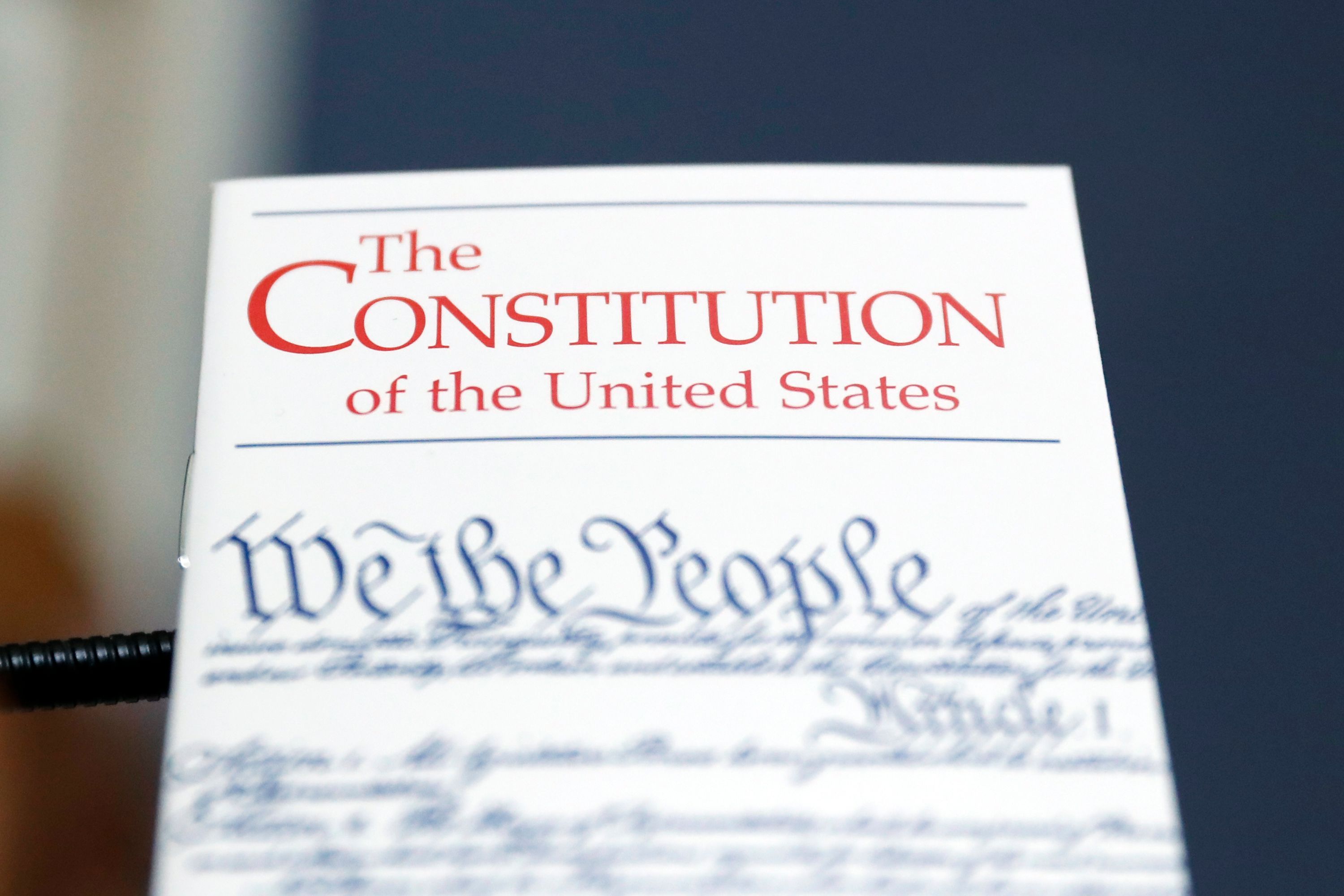 President Joe Biden’s Supreme Court Commission ended with more whimper than bang. Created in response to continued criticisms of the court’s conservative decisions and President Donald Trump’s three appointments, this group of 34 of our country’s brightest legal minds considered proposals to fundamentally alter the third branch of our government. For months, they heard testimony and circulated drafts on adding justices to the court, 18-year term limits for justices, stripping the court of jurisdiction to hear certain types of cases, requiring a supermajority of justices to overturn acts of Congress — any of which could dramatically change our constitutional order.

And yet their final report was met with a collective yawn by all but the most ardent court followers.

And why is that? The Commission took a more descriptive rather than prescriptive approach, noting the “profound disagreement among Commissioners on these issues.” But it wasn’t that their conclusions were boring; it’s that they were useless. Nobody who’s been paying attention thinks any of it will happen. Aside from adding justices (and even then there was notable disagreement among the commissioners), all of these changes would require a constitutional amendment. And amending the Constitution has become virtually impossible.

Our Founders designed the Constitution so that amending it would be hard, but not impossible. In fact, they ratified the document with many of the amendments that would become the Bill of Rights already in mind. George Washington dedicated a good chunk of his first inaugural address to the subject of amendments. And, of course, Thomas Jefferson would later tout the necessity of changes to the Constitution by successive generations: “We might as well require a man to wear still the coat which fitted him when a boy as civilized society to remain ever under the regimen of their barbarous ancestors.”

But today, thanks in large part to growing negative partisanship and shrinking Congressional interest in doing anything, the amendment process has been relegated to the dust heap while our national problems — from climate change to an outdated immigration system — pile up without political accountability. The resulting constitutional stagnation is a threat to the Republic — one that should scare you even if you think the Supreme Court has gotten every decision right (narrator: it hasn’t).

We need to amend the amending.

Article V of the Constitution explains how to amend our shared governing contract. In short, 38 state legislatures have to ratify an amendment after it is proposed either by 67 senators and 288 house members or 34 states. Of course, our population isn’t evenly divided across the states. The smallest 12 states comprise roughly 14 million people. And in a country of 330 million people, that means that, in theory, 96 percent of us could have to agree to change the Constitution — that is, if all the least populous states don’t vote in favor of an amendment.

It’s not an easy process. Of the nearly 11,000 Constitutional amendments that have been proposed over the past 233 years, only 27 have made it through. But it has also become increasingly difficult of late. In today’s dysfunctional Congress, garnering two-thirds support for anything of is a laughable notion.

Over half of the Constitution’s amendments were made in the first third of our country’s existence. The first 10 — the Bill of Rights — happened almost immediately. The next two — protecting states from lawsuits and electing the president and vice president as a ticket — were ratified within a few years. The three civil rights amendments were made following the Civil War, and ratification by the rebelling states was required for reentry into the Union. The other 12 were all ratified in the 20th century. The most recent amendment — the 27th, which prevents a congressional pay raise from going into effect until after the next congressional election — was actually proposed with the Bill of Rights and took an impressive 202-year ratification period to finally get enough state votes to become part of the Constitution in 1992.

It’s become harder to amend the Constitution even as it has become ever more important that we amend it. Nobody thinks the guys drafting the Constitution in 1787 were clairvoyant about the problems we would face in 2022. They didn’t think so either. (One of the reasons the Founders scrapped the Articles of Confederation in favor of the Constitution was because the Articles of Confederation proved too difficult to amend.) As we get further from the drafting of the Constitution, the more changes should presumably be needed to keep that document up to date as technology changes, social mores shift and (hopefully) the United States learns a few things about governing along the way.

But the Founders also likely didn’t foresee that Congress would willingly give up so much of its power to the judicial and executive branches, making amending the Constitution the only way to address the country’s big, stagnating problems — from gerrymandering to speech codes.

As Congress has done less and less legislating, the executive branch — and the sprawling number of administrative agencies in it — have faced increasing political pressure to address the problems facing the country. But the Constitution doesn’t allow the executive branch to fill in as a substitute legislature — which is a large reason why so many executive orders and actions end up in federal court. That leaves the courts in an untenable position — strike down the executive action knowing that there is little to no chance Congress will step in to address the issue at hand or allow the executive branch to continue to encroach on congressional authority, which further erodes any congressional will to tackle politically contentious issues.

Immigration is a perfect example. The last major legislative change to our immigration system was the Immigration Reform and Control Act of 1986. Millions of people came to the United States unlawfully in the decades that followed. Politically, neither side benefited from fixing the problem because it had become such a salient campaign issue. So Congress did nothing. Legislators didn’t fix the system for legal immigration; they didn’t address what to do with the people already here. After efforts in both houses of Congress repeatedly stalled, in 2009 President Barack Obama created the Deferred Action for Childhood Arrivals (DACA) and Deferred Action for Parents of Americans (DAPA), which allowed some people who had been brought to the country illegally as minors and the parents of American citizens in the country unlawfully to apply for work authorization. Republican states immediately sued, arguing that the president had exceeded his constitutional authority to “take Care that the Laws be faithfully executed,” and was instead making those new laws. More than a decade later, the federal courts have struck down DAPA and seem poised to do the same with DACA. Congress — watching all this play out — has still done nothing.

And it’s not just partisan gridlock. Despite one party control of both houses of Congress and the presidency under both of the last two presidents, Congress has continued to do less than ever. The current 117th Congress is on pace to be the least productive in more than 50 years.

That brings us back to Biden’s Supreme Court Commission. If you believe the problem with the Supreme Court is its conservative opinions on abortion, partisan gerrymandering, the Voting Rights Act, campaign finance, or well, literally anything else, then instituting 18-year terms or guaranteeing every president two SCOTUS picks per term still isn’t the answer. The Supreme Court is an inherently countermajoritarian, conservative-with-a-small-c institution that sets a constitutional floor for rights, not the ceiling. Only Congress — or an amendment process that reflects the will of the electorate — can truly address these issues. And if conservatives truly believe what they say — that the administrative state has become bloated beyond recognition and regularly encroaches on the liberties of normal Americans — then allowing for an easier Amendment process is a way to starve the beast. Administrative agencies currently rely on the very practical argument that if they don’t address an issue of national importance, no one else will.

Faced with today’s sky-high levels of Congressional inertness, the only way to fix those things is by amending the Constitution. And right now that’s too hard. Look at the trial and travails of the Equal Rights Amendment. First proposed to the states in 1972, only 35 states voted to ratify the ERA before the expiration of the deadline set by Congress in 1979. But in the wake of the #MeToo movement, three more states voted to ratify the ERA — Virginia just last year — bringing the total number of states to the 38 needed to amend the Constitution. But in the meantime, five states voted to repeal their ratification. Can Congress set deadlines for ratification? Can states “unratify” before an amendment reaches 38? Nevada, Illinois and Virginia have filed a lawsuit against the National Archivist of the United States to recognize the ERA as part of the Constitution. So far, they’ve lost.

This means that to amend the Constitution at this point, you are going to need 34 states or two thirds of each house of Congress to propose an amendment at a time when they aren’t inclined even to pass legislation with a simple majority. Then, state legislatures of 38 states have to agree to the amendment. And in the meantime, you have to keep all the states that have already voted to ratify from taking back their ratification until you get to 38.

This is not a recipe for the long term survival of a self-governing people. Neither side is benefiting from this turgid system of governance. And the obvious impossibility of a substantive amendment to the Constitution at this point in our political discourse means that people are barely proposing them anymore. The number of proposed amendments has been steadily declining, with about half as many proposed in the last Congress (78) as were proposed in 1996.

But this can change!

Amend the amendment portion of the Constitution. Our founders wanted the bar for an amendment to be high but not up where the air is too thin for survival. Perhaps two thirds of states is enough for ratification rather than three quarters? Perhaps we explicitly prohibit take backs after ratification by a state?

I’m open to edits, but let’s get the ball rolling with some text: An amendment to this Constitution proposed by a majority of both houses of Congress or a majority of states shall be valid when ratified by the legislatures of two thirds of the several states; provided that no amendment shall abridge the privileges or immunities of citizens of the United States. No state shall be able to withdraw their ratification and all deadlines for ratification must themselves be contained within the text to be ratified.

In the fall of 2005, I carried Justice Antonin Scalia’s papers across Harvard’s campus as we chatted about legal nerdery. Looking back, he was speaking to me in the same way an adult tries to engage a 3-year-old in conversation, knowing they don’t understand all of it but hoping they are learning to speak the language in the process. But as I struggled to comprehend what we were talking about, Scalia said something that I found quite shocking. So much so, I’ve remembered it to this day.

He said that he believed that the Constitution was flawed. It was too hard for the people to “overrule” Supreme Court decisions, which left the courts holding the bag on thorny issues better left to the political process.

In 2014, he and his judicial bestie, Ruth Bader Ginsburg, were asked how they would change the Constitution. She said she would like the Equal Rights Amendment to be ratified. Scalia gave the same answer he had given to me a decade earlier: As reported by the Legal Times, “[Scalia] once calculated what percentage of the population could prevent an amendment to the Constitution, and found it was less than 2 percent. ‘It ought to be hard, but not that hard,’ Scalia said.”