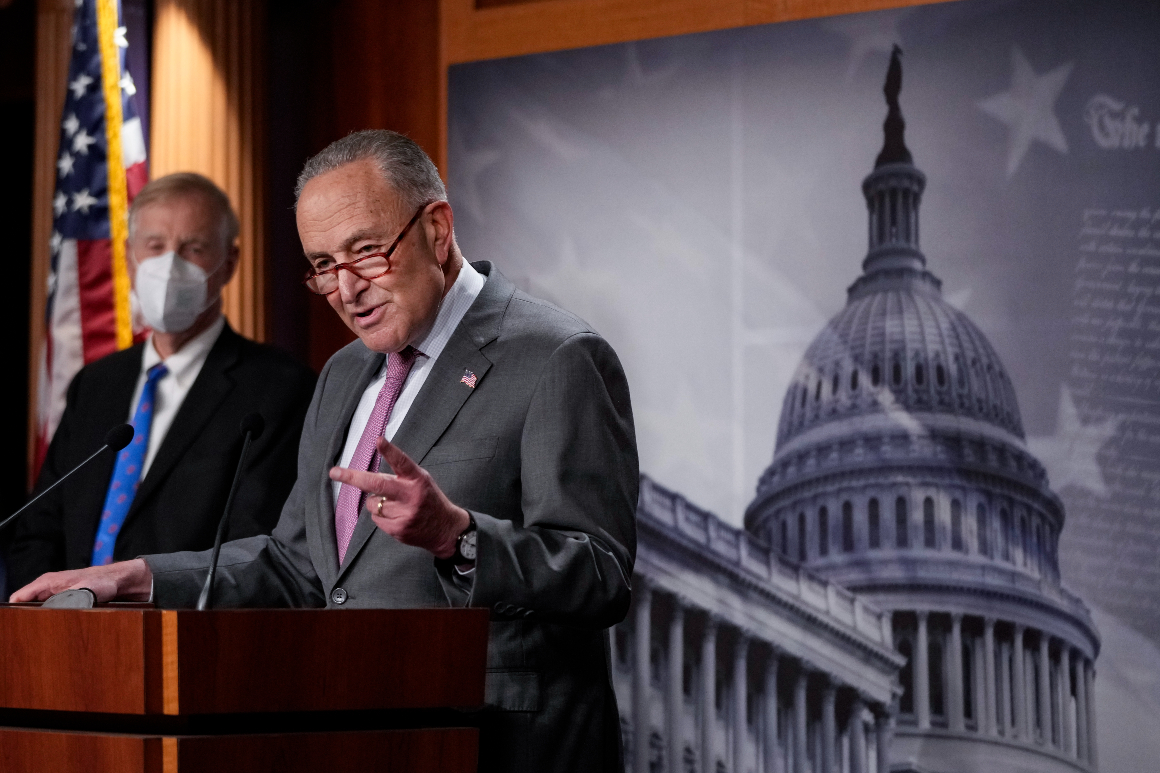 Senate Democrats will stick together on this week’s vote to push their voting and election reform bill past Republican opposition. Then they’ll focus on isolating two of their own centrists.

The Democratic caucus is pressing forward with laying blame on Sens. Joe Manchin (D-W.Va.) and Kyrsten Sinema (D-Ariz.) for the party’s failure to advance sweeping elections reform, thanks to their resistance to weakening the filibuster. The move carries considerable risk, given that Sinema and Manchin will be essential to any further success the party can muster this year — particularly on any resuscitation of President Joe Biden’s economic agenda.

Sen. Tim Kaine (D-Va.), who has been speaking to Manchin on rules changes, said Democrats have tried to come up with a proposal that’s consistent with his and Sinema’s positions and that they aren’t worried the vote will alienate the two centrists.

The Senate Democratic caucus is set to huddle on Tuesday evening to discuss the coming confrontation over changing chamber rules to help shore up the Voting Rights Act and enact federal election standards. Among their multiple options to defang the 60-vote requirement to get most bills through the Senate, Democrats are leaning toward voting on the revival of the so-called “talking filibuster” to the Senate, according to several people familiar with the situation.

“You go through the details of it, and it’s more of a talking filibuster,” said Senate Majority Whip Dick Durbin (D-Ill.). He said there was no final decision on which rules change option to take up, heading into the caucus meeting.

The talking filibuster would, after lengthy debate, require a simple majority to advance any bill toward final passage. Democrats have also discussed a carveout from the filibuster for voting and elections reform, but that idea appears to be getting less traction.

Sinema and Manchin won’t support either option. Last week both centrists emphatically rejected weakening the filibuster, even as Biden came to the Senate to try and marshal their support. Sinema publicly upended the president’s push ahead of his meeting with Democrats, while Manchin reiterated his opposition shortly after the meeting.

“We’ve bowed in their direction for months. I think we’ve shown them proper respect,” Durbin said. Asked later if Sinema and Manchin had a duty as Democrats to support the rules change, he replied: “I don’t know where their loyalties start and end. They can only answer that themselves.”

Several other Democrats haven’t made a final decision on rules changes; one of them, Sen. Mark Kelly (D-Ariz.), will participate virtually in Tuesday’s caucus discussion due to business in his home state. Kelly is up for reelection this year and has not publicly endorsed changing the filibuster.

Majority Leader Chuck Schumer made clear again on Tuesday that the election reform vote and the associated filibuster reform would go forward, regardless of its nearly guaranteed failure in the evenly divided Senate.

“If Republicans choose to continue the filibuster of voting rights legislation, we must consider and vote on the rules changes,” Schumer said. “Long odds are no excuse for this chamber to avoid this important issue. Again, members of this chamber were elected to debate and to vote. We’re going to vote.”

This week’s debate comes after Schumer vowed last year that “failure is not an option.” The voting legislation that will fall short was crafted in response to a flurry of GOP-backed state-level bills designed to restrict ballot access. Proponents of the bill bet that Manchin and Sinema would relent on the filibuster if it were proven that the election and voting legislation could garner no GOP support.

But the two centrists have remained consistent in their position for more than a year. As Manchin put it last week: “As I have said many times before, I will not vote to eliminate or weaken the filibuster.”

As a result, rank-and-file Democrats are grinding into the breach for what will potentially be their most high-profile failure of this Congress so far. Most in the caucus insist every Democrat must go on record at what they see as a historic moment.

“There are battles worth fighting, and protecting freedom to vote is one of those battles. And even if you fail, that doesn’t mean you’re just going to give up,” said Sen. Mazie Hirono (D-Hawaii). “We need to take this vote to let the American people know where each of us stands. That’s it.”

The damage that does to the rest of the party’s priorities, chiefly the moribund $1.7 trillion party-line social spending bill, is unclear. Manchin torpedoed the spending measure; while Sinema sounded supportive, she never explicitly endorsed it. Schumer has also vowed he will get the votes to pass that bill.