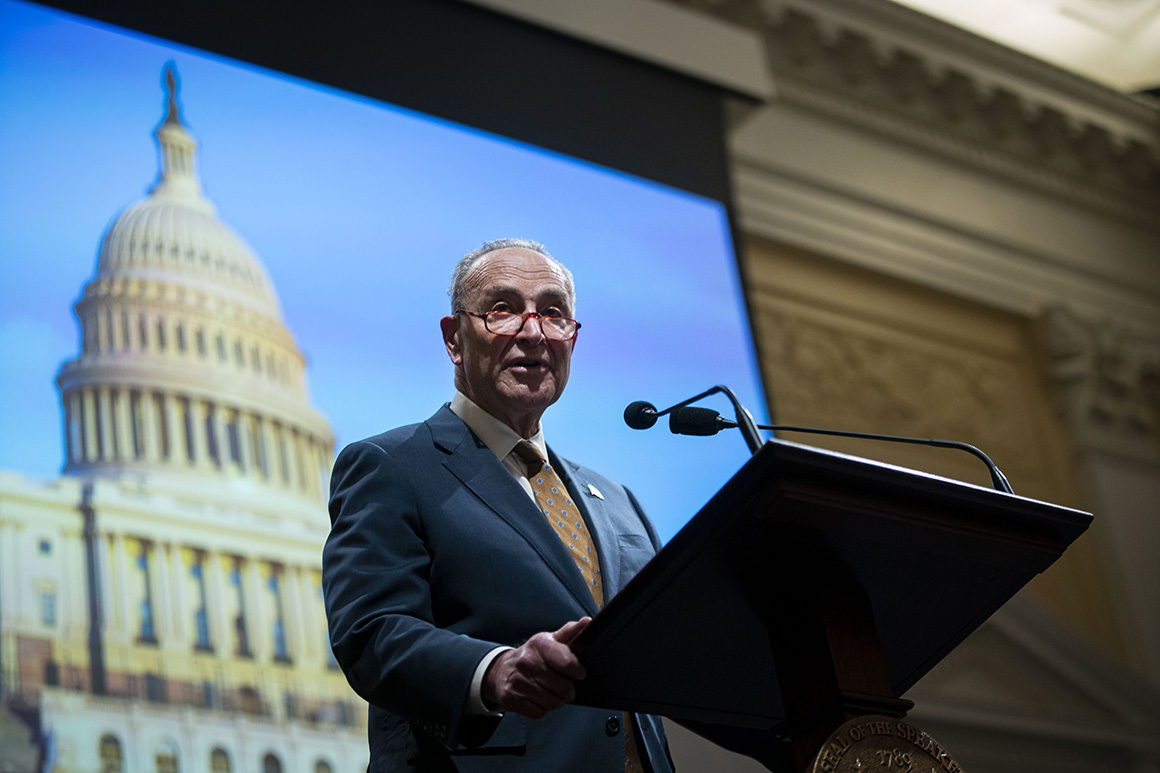 You might think Senate Democrats are trying to ax the filibuster to pass election reform. It’s not quite true.

President Joe Biden’s party is trying for something narrower, discussing a menu of potential Senate rules changes that might help pass elections and voting rights legislation without outright eliminating the 60-vote threshold that’s now required to pass most bills. And the smaller-scale ideas Democrats are now debating may not fully overcome the GOP’s staunch opposition to the elections bill.

Not to mention that it’s unclear whether Democrats have the votes to chip away at minority-party power in the Senate, given public resistance from Sens. Joe Manchin (D-W.Va.) and Kyrsten Sinema (D-Ariz.). Those two centrists support the election reform measure but are dug in against changing the 60-vote threshold and have yet to signal they’re on board with making any rules changes at all.

“Different people have various differing ideas about what kind of reform there should be,” said Sen. Richard Blumenthal (D-Conn.). “We’re trying to come to a consensus.”

Given that the Senate is evenly divided, Democrats will need all 50 of their caucus members to support any tweaks along party lines, a process known as going “nuclear.” The matter is expected to come to a head as soon as this week — but it won’t be as dramatic as the term “nuclear” would suggest.

Senate Majority Leader Chuck Schumer has vowed that he will take up and vote on changes to the chamber’s rules by Monday, the holiday in honor of civil rights icon Dr. Martin Luther King Jr.’s birthday, if Republicans once again block Democrats’ elections reforms bill (which they plan to do).

Should Schumer follow through, it’s possible the party gets Manchin’s vote for a small piece of reform. If Manchin and Sinema can be persuaded to vote along party lines for any rules change that allows the elections bill to pass, that small reform would look historically massive in an instant.

That’s a big if, however. Three of Manchin’s fellow caucus centrists, Sens. Tim Kaine of Virginia, Jon Tester of Montana and Angus King of Maine, have been meeting with Manchin to try to sway him. But until the party coalesces around a single proposal or set proposals, it’s hard to know what Manchin and Sinema will be pushed to vote yes on.

Here are some of the options Democrats are discussing:

Under current Senate rules, senators need 60 votes to end debate on most bills. (Final passage still takes a simple majority, but senators first need to vote to stop debating). A return to the so-called “talking filibuster,” which the chamber essentially dropped in the 1970s, requires a senator from the minority party to be speaking for as long as he or she wants to block a bill. As long as a senator keeps talking, debate can’t end.

Yes, this is a “Mr. Smith Goes to Washington”-style filibuster, for those who have seen the classic 1939 Jimmy Stewart film.

Under a talking filibuster, 60 senators can vote to end debate at any time. If that doesn’t happen, the debate continues until the minority party leaves a vacancy on the floor — at which point the majority party can move to final passage of the bill, requiring only a simple majority vote.

Republicans argue that going to a talking filibuster would hurt the rights of the minority.

“It still doesn’t really accomplish the recent tradition of the filibuster to protect the rights of the minority. It just lengthens the process,” said Sen. Kevin Cramer (R-N.D.).

Clearing the way to debate

Current Senate rules require 60 votes to even start to debate a bill, which allows a minority of senators to stop legislation from getting any floor consideration. Democrats are considering a proposal that would reduce the votes needed to start debate from 60 to 50, a move that potentially could be paired with the talking filibuster.

Schumer has repeatedly said the Senate should have a floor debate on elections reform legislation, a signal that this step might be one Democrats press forward on.

Under one version of this proposal, Democrats would pair their change with a guarantee that both sides would get an equal number of germane or relevant amendments once debate begins. That doesn’t mean amendments would be limited; proponents of making it easier to start debate say guaranteeing a certain number of amendments to both sides would soften the blow for the minority.

But the GOP is sure to see the blow as huge no matter what.

Democrats have also discussed the possibility of a so-called “carveout” from the filibuster for voting rights and election reform. Under this idea, Democrats would change the Senate rules to allow for a one-time exception to pass the party’s high-priority legislation, with a simple-majority threshold.

But this is perhaps the least likely option for Democrats; Manchin and Sinema have both said they don’t support a carveout.

Democrats are also looking at whether to change the number of senators needed to end a filibuster. Current rules require 60 senators, regardless of how many are actually voting that day, but some Democrats want to change that number to three-fifths of senators actually present for a vote.

In other words, if 80 senators show up for a specific vote, the Senate would only need 48 members to vote to end a filibuster instead of 60.

Another option Democrats are discussing would require the minority party to provide 41 votes to keep filibustering. This pitch would automatically end debate if 41 members of the minority don’t show up on the floor.

Until Senate Democrats choose which of their options to pursue, it’s hard for even members of the caucus to gauge how close they are to support. And more minor rules changes won’t necessarily guarantee passage of the elections and voting rights bill. Sen. Jeff Merkley (D-Ore.) who has long advocated for rules changes, is making the case in private presentations to his colleagues.

Sen. Chris Coons (D-Del.) said this week will be critical for the party to choose its course, adding that earlier Monday he met with his staff to ask: “What exactly is it we’re voting on? What’s the language, what’s the proposal?”

In order to make any rules changes once they decide on some, Democrats would have to vote along party lines to enact them. That’s where the word “nuclear” comes in — although it refers to the political and interpersonal effect of the change, not the level of fireworks on the floor. In fact, the actual process is low-key.

Here’s how it works: After a failed vote, the majority leader makes what’s known as a “point of order,” essentially saying that a rule of the Senate is being violated. The senator sitting in the chair weighs in on that point of order, citing current rules. Then the majority leader can appeal to the chair to change the chamber’s rules, and the Senate votes on that appeal with a simple majority required for passage.

The Senate first went nuclear in 2013, when then-Majority Leader Harry Reid (D-Nev.) changed the rules to allow Senate confirmation of executive-branch and judicial nominees, with the exception of the Supreme Court, by a simple majority vote.

Mitch McConnell, then majority leader, followed in 2017 by going nuclear to allow Supreme Court nominees to be approved by a simple majority. He pushed through another rules change along party lines in 2019, reducing the debate time required to confirm certain non-Cabinet-level nominees.

But regardless of the rules change Democrats pick, it won’t be easy to convince Manchin and Sinema to go nuclear. Manchin has voted against every rule change along party lines since he came to the Senate in 2010.