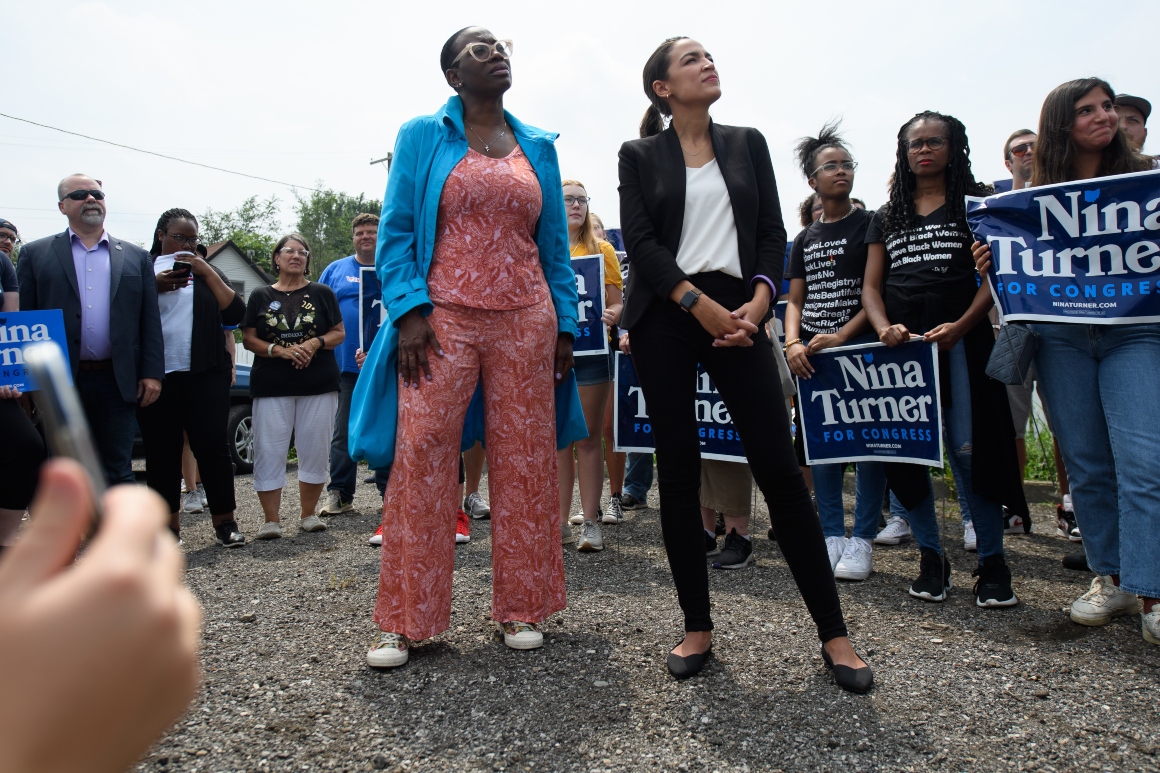 When Joe Biden first came into office, progressives said he could be the next FDR.

Now, as Biden’s relationship with the left has come under strain, liberals are talking about treating him like former President Jimmy Carter instead — and mapping out a Democratic primary challenge in 2024.

Weaver stresses that he is not advocating for such a primary campaign. But the chatter about a left-wing challenge to Biden, which was virtually nonexistent weeks ago, has suddenly burst into public view in the wake of Sen. Joe Manchin (D-W.Va.) killing the president’s climate and social spending bill.

“He’s deeply unpopular. He’s old as shit. He’s largely been ineffective, unless we’re counting judges or whatever the hell inside-baseball scorecard we’re using. And I think he’ll probably get demolished in the midterms,” said Corbin Trent, co-founder of the progressive No Excuses PAC and former communications director for Rep. Alexandria Ocasio-Cortez (D-N.Y.). “People will smell opportunity, and D.C. is filled with people who want to be president.”

No one now in office — and none of the top-tier presidential contenders from 2020 — is viewed as a serious prospect to take on Biden. Nor is there any expectation that Sanders or Sen. Elizabeth Warren, both of whom have enjoyed a significant amount of influence in the Biden administration, would primary Biden. Few seriously think Ocasio-Cortez would risk her political capital in a long-shot challenge to the president, either.

“Yes, but someone like Nina Turner or Marianne Williamson. Doubt anyone currently elected,” said one prominent progressive when asked if someone from the left would run against Biden.

The fact that any primary challenge at all is now openly being discussed demonstrates how disappointed some progressives are about Biden’s presidency. It’s also a reflection of Biden’s weakness in the polls and his advanced age — the same factors that are driving more traditional and moderate Democrats to talk privately about scenarios if Biden doesn’t run for reelection as promised.

“I don’t think the country nor certainly not progressives in the party, who all tend to be younger, are going to sit on the sidelines,” said Mark Longabaugh, a progressive ad-maker who worked as a consultant for Sanders’ presidential campaign.

Weaver argued that a liberal challenge wouldn’t be a “repudiation” of Biden but rather the result of the Democratic Party moving left: “Progressives are ultimately ascendant. And if nothing else, a progressive running who gets a lot of support will demonstrate that the ideas that the progressive movement embraces are, in fact, popular.”

Though a progressive challenger would face an almost impossible task — despite his flagging poll numbers overall, Biden is still supported by the vast majority of Democratic voters — even a symbolic candidate could cause political trouble for the president.

If a left-winger primaries Biden, Trent predicted that “it’ll be a bigger primary than people anticipate — I think it’ll be like a Jimmy Carter primary.” Ted Kennedy, a liberal, won close to a dozen states during his 1980 challenge of Carter, who then went on to lose reelection.

When Sanders himself reportedly considered running against then-President Barack Obama ahead of his 2012 reelection campaign, the Obama team was alarmed because “every president who has gotten a real primary has lost a general [election].”

No candidate of Kennedy’s stature has even hinted at mounting a bid. “Progressives in the House, in the Senate, in the Progressive Caucus are not talking about primarying Biden,” said an aide to a senior House progressive.

If Biden did face a left-wing challenge, even from a lesser-known figure, it would mark a dramatic turnaround in his relationship with progressives. Though Biden was not their candidate — and liberals were deeply disappointed watching Sanders come close to winning the nomination only to falter — they have ended up being among the president’s staunchest allies. Top progressive aides helped elect Biden, and liberal House and Senate members have strongly defended his agenda in Congress.

“President Biden and his senior team have made a concerted effort to reach out to me since Sen. Sanders’ campaign ended and seek input into legislation and strategy,” said Rep. Ro Khanna, a former Sanders campaign co-chair. “He wants to implement a bold progressive vision, and he will have my enthusiastic support in 2024 so we have eight years to do it.”

Biden already looks to be trying to make amends with the left. Since Manchin axed Build Back Better, the president has acceded to two major demands from progressive lawmakers and activists: He extended the pandemic-related moratorium on student loan payments and recently offered his clearest and most direct support for doing away with the filibuster to push through voting rights legislation.

“The president and the full spectrum of the party are working to deliver on Build Back Better, including strong collaboration with progressives and the left,” said a Biden campaign alum. 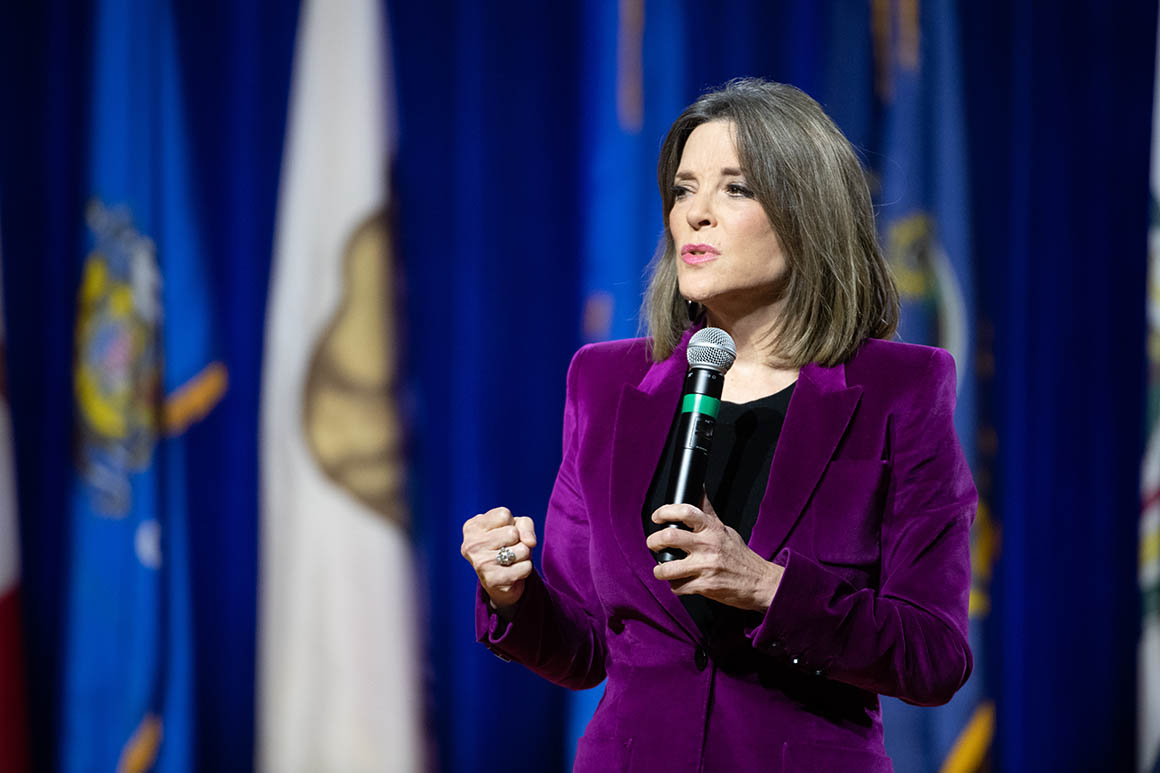 Williamson, a self-help author who dropped out of the 2020 presidential campaign before the first caucuses, said “I think the president will definitely face a challenger in 2024 … The yearning to make government actually work for the people again is so intense now, and yes, absolutely, someone will emerge to make a stand for it.”

She did not respond to a question about whether she would consider running against Biden.

Turner told POLITICO shortly after Manchin’s announcement that there would be a left-wing challenge against Biden “without a doubt.” Like Williamson, she did not reply when asked whether she might be the one to do it.

A spokesperson for Sanberg said “there’s no truth” to the idea that he would consider primarying Biden.

During a run for Congress in a 2021 special election, Turner was a prolific small-dollar fundraiser and won the support of big-name progressives. She lost by more than 5 percentage points, however, and is believed to be eyeing a potential rematch with now-Rep. Shontel Brown.

There is anxiety among some progressives that a challenge from a long-shot candidate would diminish the left’s brand — and perhaps create the impression that it is in a weaker state than it truly is. After Sanders launched two credible bids for president, liberals do not want to return to the days when former Rep. Dennis Kucinich was their standard-bearer in the race for the White House.

“I think it’s pretty unlikely that a serious progressive challenger would emerge if Biden stays in the race,” said Max Berger, former director of progressive outreach for Warren’s 2020 presidential campaign. “It would so go against the sensibilities of rank-and-file Democrats that I don’t think it would necessarily be a great service to the progressive cause to have our ideas seem so marginal.”

He added that, while it would look bad for Biden if a left-wing challenger received 20 percent of the vote in a Democratic primary, “the flip side of the 80-20 thing is I don’t want us getting 20 percent.”

Left-wing operatives and activists agree that if Biden declines to run for reelection, a more fulsome list of progressive candidates will consider a campaign, possibly including “Squad” members Ocasio-Cortez, Ayanna Pressley (D-Mass.) and Rashida Tlaib (D-Mich.). California Reps. Khanna and Katie Porter, Warren, former presidential candidate Julián Castro and Sen. Jeff Merkley (D-Ore.) also draw mention. If liberals fare well in next year’s midterms, that could also have an impact in shaping the 2024 field, particularly if the election goes as badly as expected for the party as a whole.

With the exception of Porter, who has ties to Vice President Kamala Harris, progressives do not expect prospective candidates on the left to stand down if Biden decides not to run again and passes the baton to his veep.

Some liberals even believe that elected officials who are currently not well-known or closely tied to the left, such as Rep. Joe Neguse (D-Colo.) and Illinois Gov. J.B. Pritzker, could make a play for the progressive lane in an open primary in 2024.

Few of them, however, have the cache of some of Biden’s top-tier rivals for the nomination in 2020. Sanders, who is 80 years old, has said it is “very, very unlikely” he will run again. Warren, at 72, is younger, but significantly underperformed expectations in 2020. While many liberals would be overjoyed if she ran, Ocasio-Cortez would, at 35, be just old enough to qualify, and many are unsure if she will take the plunge.

A progressive operative said that because of the lack of an ideal bench, talk on the left about a plan B if Biden doesn’t run for reelection is not taking place “as much as I wish was happening, to be honest about it.”