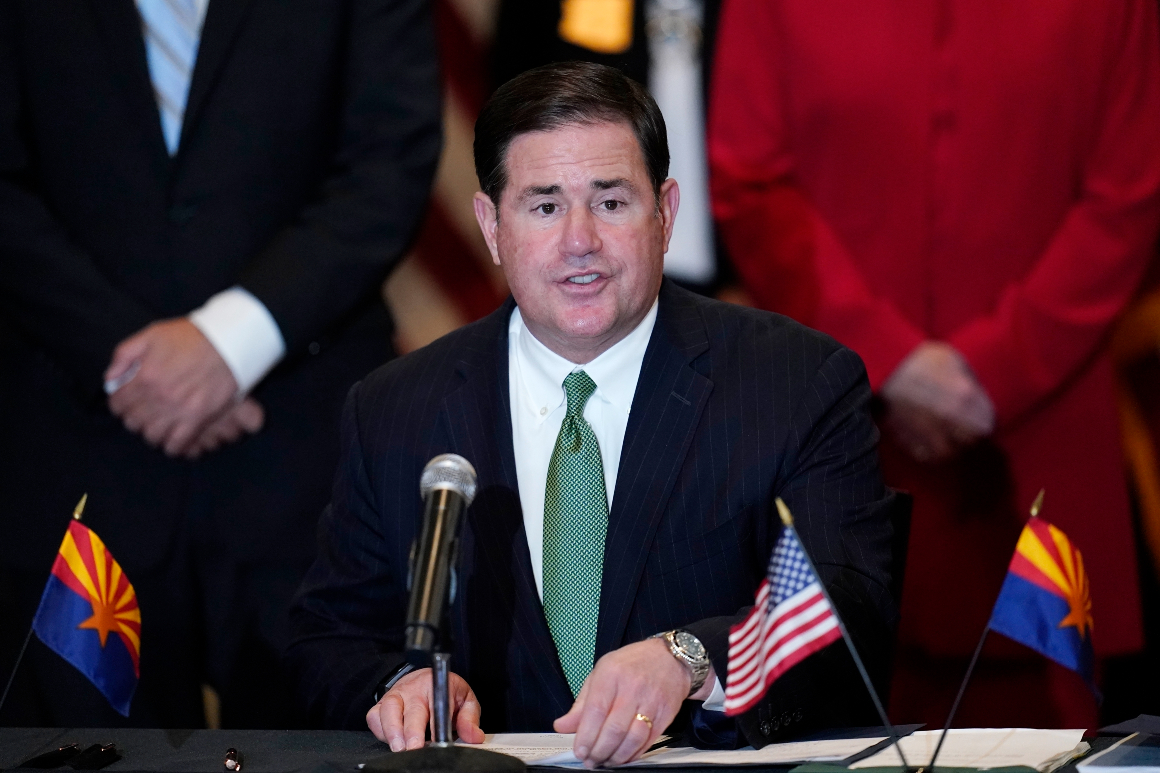 Arizona Gov. Doug Ducey declared in January 2021 that he was “100 percent” focused on his current job and uninterested in a bid for Senate. But speculation among state political insiders that Ducey is plotting a late entry into the Senate race has escalated in recent weeks — a development that would scramble a contest that is pivotal to the battle for the Senate majority.

The term-limited Republican governor, now in his last year of office, has not said anything publicly that suggests he has changed his mind. The Aug. 2 GOP primary to take on Democratic Sen. Mark Kelly is well underway as state Attorney General Mark Brnovich, venture capitalist Blake Masters, solar power executive Jim Lamon and state emergency leader Mick McGuire compete for the nomination, a race that has already generated millions of dollars in Republican ad spending.

Ducey’s final State of the State address on Monday, however, left the Arizona State Capitol Complex abuzz after the governor used the speech to repeatedly criticize the federal government. His address included six mentions of Washington, D.C., along with sustained attacks on President Joe Biden and his administration — the kind of broadsides more likely to come from a candidate for federal office than a governor outlining his final state legislative agenda.

To many Arizona Republicans, he didn’t sound like a man who believes his political career is winding down this year.

National Republicans have continued to hold out hope that the governor would reconsider his decision. Ducey has won statewide office three times, including as state treasurer. He also has across-the-board name recognition and a well-oiled campaign infrastructure. Just as important, as Kelly starts the year with nearly $20 million on hand, Ducey has honed his fundraising skills and amassed a network of national donors after serving the past year as chair of the Republican Governors Association.

“These are all the kinds of metrics that the professional watchers look for in a prospective candidate, and he checks every box,” said Kirk Adams, Ducey’s former chief of staff. “Just because he can do it doesn’t mean he will do it.”

In the past several months, Ducey has brought on four new staffers who previously worked for Arizona Sens. John McCain and Jeff Flake, including two who were state directors, according to a POLITICO review of the governor’s office’s staff announcements.

Ducey’s campaign spokesperson did not respond to requests for comment for this story,

With a filing deadline of April 4 to collect and submit thousands of petition signatures, Ducey doesn’t have much longer to decide. A Ducey for Senate announcement, if it comes, would likely take place by the end of February, according to a source familiar with the governor’s circle.

Former President Donald Trump looms as a powerful force in the race. Trump, who has a rally scheduled Saturday in Phoenix, has made Ducey a frequent target of abuse, criticizing him over the past year for his refusal to embrace election fraud conspiracies. In June, the former president said the Ducey “could not get the nomination” for Senate, if he ran.

Despite endorsing in the state’s 2022 gubernatorial and secretary of state races, Trump has yet to get behind anyone in the Senate primary, where Brnovich, the current frontrunner, has struggled to command a significant lead as nearly half of primary voters remain undecided, according to recent polling.

Like Ducey, Brnovich has faced Trump’s ire for not seeking to overturn Biden’s Arizona victory. The two statewide Republicans who were first elected to their posts in 2014, however, have a frosty relationship dating back years, and have not worked together particularly closely while in office.

In November, the former president appeared at a fundraiser held at a Mar-a-Lago for Masters.

“I think he’s self-perpetuating it to keep his name out there and to keep himself relevant,” Arizona Republican strategist Chuck Coughlin said of the Ducey rumors. “I just don’t see why he does it. It’s masochistic. He’s definitely not that guy.”

Following reports this week that Maryland Republican Gov. Larry Hogan is still being courted for and is considering a Senate run this year, a person involved with national Senate races said Ducey is “certainly more likely than Hogan” to get in, and that there has been an uptick in conversations in recent weeks about a Ducey run.

Spokespeople for Senate Minority Leader Mitch McConnell and the National Republican Senatorial Committee declined to comment on the prospects of Ducey getting into the race.

Adams said the governor would be the “prohibitive favorite to be the next United States senator” if he became the Republican nominee.

But even Arizona Republicans who believe Ducey would be the top candidate in the race are skeptical of the notion that he has changed his mind.

“The rumors never stop,” said Sean Noble, a GOP political consultant in Arizona. “There continue to be rumors. There are capable people running in the Senate race right now, most of which would be strong opponents” against Kelly.

Ducey’s statewide approval rating this fall was 42 percent, on par with Kelly’s, according to polling conducted by HighGround, Coughlin’s political consulting firm in Phoenix. Roughly 65 percent of Republicans in the state had a favorable view of the governor, the firm found, despite Trump’s criticism.

Chad Campbell, a Democratic political consultant in Arizona and former state House minority leader, was among those who were struck by how Ducey’s speech Monday stood in contrast to his previous seven.

“I think a lot of people heard that and said to themselves, ‘He’s looking at jumping in the Senate race still,’” Campbell said. “At the very least, he’s wading into the water and testing the temperature. If he’s going to do it, he will have to do it soon.”