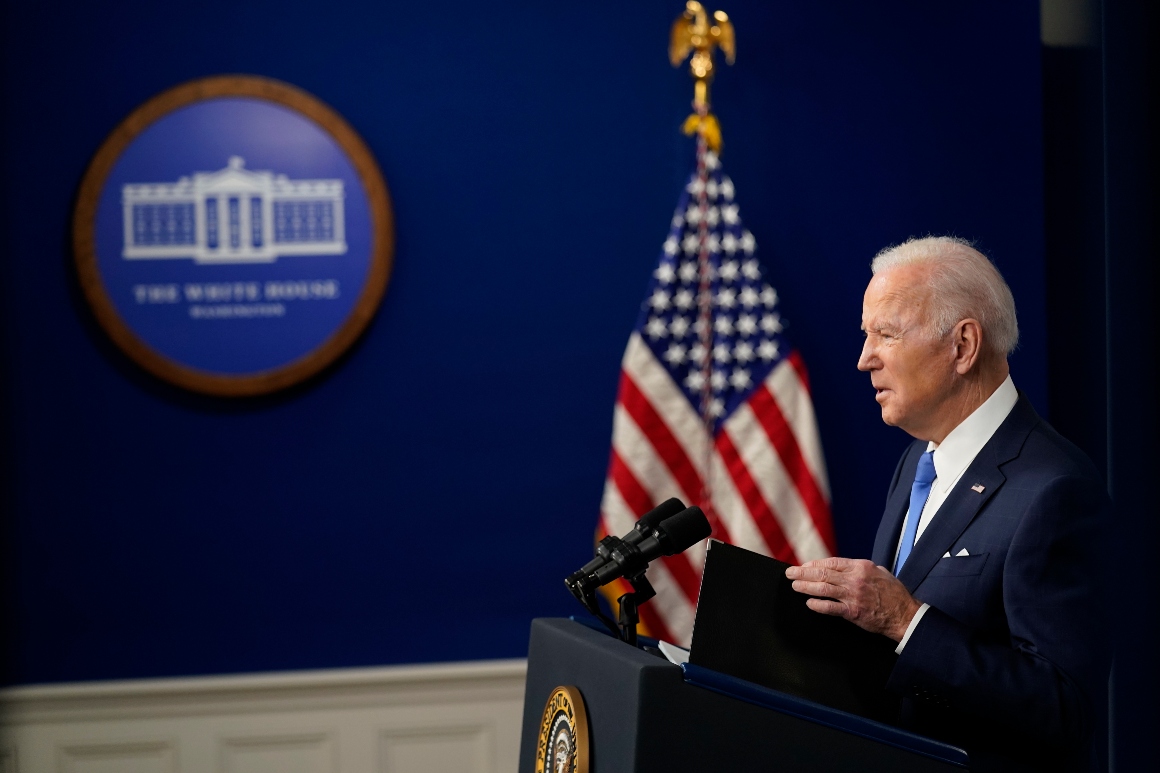 When Donald Trump was at the helm, America’s allies were deeply critical of his administration’s foreign policies. On the plus side, the freewheeling White House gave them wide-ranging access to top officials.

After one year with President Joe Biden in charge, friendly nations say they’re much happier with U.S. foreign policy, but they’re frustrated by the lack of high-level access and plodding decision-making.

In particular, many feel shut out of the national security policy process — but hope efforts to deter another Russian invasion of Ukraine could mark a turning point.

POLITICO spoke with 19 ambassadors and senior embassy staff serving in Washington, D.C., and hailing from Europe, Asia, Africa, Latin America, the Middle East and the Pacific. In nearly unanimous fashion, they described an administration that is more organized and process-driven than the previous one.

While fewer diplomats now have tweet notifications set for White House accounts, the rub is that they feel left out by an administration that takes pains to say it’s deliberate and consultative.

“At the end of the day, what are we talking about? We’re talking about 10 fucking minutes of your time,” said one ambassador from a European Union country. “The thing is [Russian Foreign Minister Sergey] Lavrov, he will travel to our country and he will sit down with our guys for an hour, hour and a half. It’s not that we believe everything that Mr. Lavrov says, but if he gives an hour of his time, you will listen to him, you will get his spin.”

But for many large European countries, there’s been a noticeable improvement in the Biden administration’s engagement since the Afghanistan debacle: “They coordinate quite closely, it’s quite successful,” said one ambassador. In fact, more powerful regional countries tend to receive a lot of attention from Biden’s team. “I’ve been spoiled,” said one ambassador from Asia. “More or less, we can have immediate communication.”

The ambassador added that America’s domestic problems and the pandemic limit how much time and energy the administration can spend with all who want attention. “There must be some frustration on the part of smaller countries, but that’s a reflection of the political realities that exist here.”

Officials from smaller nations, mainly in Europe, are getting that message. As one ambassador said of the State Department protocol office: “They’ve done zero. They will say it’s because of Covid, yeah, but guys: come on.”

Others complained the administration isn’t reading them into important decisions, like what was on the table during U.S.-Russia negotiations over Ukraine last week. One official said their government is only getting readouts from public NATO statements.

“We are in some kind of gray zone. We don’t know what they’re saying about us,” the official asserted, adding that “we never felt so insecure as we do now,” and suggesting that other smaller governments in Europe feel the same.

Jens Stoltenberg, NATO’s secretary general, said he is “very grateful” for how the U.S. has worked with NATO “both before the bilateral talks with Russia in Geneva, but also afterwards.” “Deputy Secretary [of State] Wendy Sherman has spent so much time with NATO allies consulting closely,” he added.

For some European countries outside the alliance, that emphasis on close NATO consultation is what stings so badly. “Jake [Sullivan] and Amanda [Sloat] are choosing to communicate through NATO,” complained one European official, referring to the national security adviser and NSC Europe director, respectively.

But EU Ambassador Stavros Lambrinidis lauded the Biden team for “taking the drama out of the relationship,” and noted that “when you bring skin to the game: they listen.”

Speaking on condition of anonymity to allow these foreign officials to speak freely, however, the majority of ambassadors POLITICO spoke with said the Biden administration operates at odds with the president’s well-earned reputation as an empathetic schmoozer.

Top officials, from Joe Biden on down, don’t call often enough or issue the invitations diplomats have come to expect from a friendly White House.

While major regional players such as Germany, the United Kingdom, France, Australia and Japan see Biden and other top officials at major summits, often several months pass in between phone calls. “He should pick up the phone a bit more often,” said one ambassador from a G-7 country.

Smaller countries, meanwhile, are stuck behind a veil of bureaucracy and technocracy, their officials told POLITICO. “This is an administration that says constantly ‘Europe, Europe, Europe’ and what they really mean is Berlin and Paris. And that’s all,” said one European ambassador from a midsize country.

A deputy ambassador from Africa said he appreciates that “Biden added back respect into dealings with other countries,” and is starting to deliver his global Covid pledges. But he also can’t overlook that “there were complications: leaving Africa without vaccines for months, it was frustrating,” including only having midlevel administration officials to contact about any concerns. “We have access, but the truth is the heads of countries are still not talking [with the president].” An Africa-U.S. summit is planned later in 2022.

The White House stands by its approach. “President Biden made it a top priority to revitalize our relationships and restore trust in our leadership, and we have worked hard over the past year to do so. We are proud to work alongside like-minded allies and partners on the full range of our priorities and continue to believe that many of our greatest opportunities for progress come from cooperation,” National Security Council spokesperson Emily Horne said.

The NSC also pointed POLITICO to the administration’s success in multilateral forums, including signing up 110 countries to a Global Methane Pledge, steering an effort among 136 countries toward an agreement on a global minimum corporate tax rate, and hosting a Covid vaccine summit.

But for an administration that has called threats to democracy a top diplomatic and national security priority, and which hosted the Summit for Democracy in December, several foreign officials dumped on Biden’s crisis management diplomacy: “They’re definitely underperforming for now,” said one European ambassador.

Managing dozens of allies and a few wily adversaries is bound to overfill any diary. Yet POLITICO heard a range of examples from ambassadors about how their first contact on an issue — and sometimes their first contact with the Biden administration, period — came only when the White House needed something.

Spain — the EU’s fourth-biggest power — got its first call from Biden on Aug. 21, after Kabul fell to the Taliban and as the United States was looking for places to temporarily house Afghan evacuees. Until then, all Prime Minister Pedro Sánchez could manage was a corridor walk with Biden during a June NATO summit.

For others, the first call came regarding Huawei’s role in their 5G networks. “If we only get a phone call the day you want us to kick the Chinese out of our 5G network — which under our law is extremely complicated, and we are a country of laws — then how do we do that?” asked one puzzled European ambassador.

Asian governments, predictably, are grateful that successive administrations are spending more time on their region. One Asian ambassador praised the Biden team’s outreach to Indo-Pacific countries, including under the Quad framework, which includes India, Japan, Australia and the United States.

The administration recognizes the need to strengthen ties to China’s neighbors as it faces off on multiple fronts with Beijing, the ambassador said, but is hamstrung by the lack of a trade agenda for the region. Trump withdrew from a Pacific trade deal his predecessor championed, and 15 nations including China pushed ahead with a separate Regional Comprehensive Economic Partnership.

With over 100 diplomatic and national security positions requiring Senate confirmation still unfilled — roughly half because there is no nominee, half due to Republican blockades — the other challenge is simply finding a senior official to talk to.

“The chief of protocol: I’ve never seen the guy,” said one ambassador.

While every ambassador wants to maximize meetings and calls with administration officials, there’s also a U.S. strategic interest: face-to-face engagement could offer dividends when it comes to allies aligning with the U.S. on Russia and China policy.

“If you take your microphone and go on any European street and ask them how much they perceive China as a threat, or about freedom in the South China Sea, they will be like, ‘What the fuck are you talking about?’” said one ambassador. “You need to do some convincing, you have to really work through this.”

Citing Covid concerns, the administration has dispensed with some of the traditional niceties of Washington hospitality, such as new ambassadors presenting their credentials to the president in person. At least 28 ambassadors who arrived in Washington in the first six months of Biden’s term missed out on the opportunity; the State Department has not provided more recent data.

Another ambassador told POLITICO that their head of state wanted to sit down for dinner with Biden. The White House, preferring not to expose the president to risk during a pandemic and fearing bad optics of dining in close quarters while he tells Americans to socially distance, told the embassy a meal wasn’t possible.

It’s a missed opportunity, said another ambassador: “We could do it with face masks: these are triple vaccinated people who can get tested the same morning. There are ways to do this, right?”

One sign of the sensitivity around face-to-face engagement is the ministerial gushing when it does happen. “I really appreciate the effort you’ve done in the middle of this Omicron crisis in which contacts are very complicated,” said José Manuel Albares, Spain’s foreign minister, after a meeting with Secretary of State Antony Blinken on Tuesday — as if the administration had only just learned about social distancing.

In the growing competition between democracy and autocracy, allies may have little choice to work with the United States on its schedule and rhythm. But if there’s a lesson from the first year of Biden’s promise that “America’s Back,” it’s that smaller allies feel overlooked, and feel it deeper still when they can’t get anyone to pick up the phone.

In the words of the European ambassador with the potty mouth: “Sometimes an investment of a little bit of time gets you a lot of goodwill.”