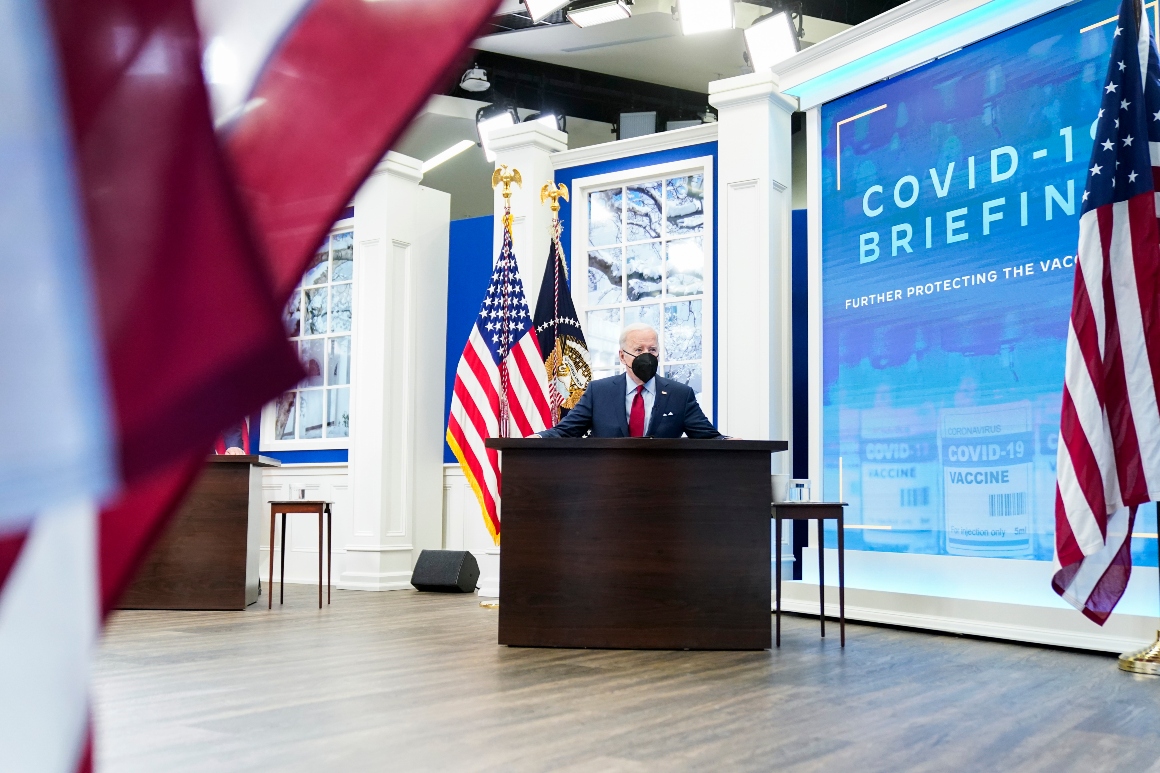 A year later, with the country facing unprecedented levels of disease once again, his administration is now hoping to fight it to a draw.

Besieged by the fast-spreading Omicron variant, the White House is racing to limit the fallout from record cases swamping the nation — an explosion that’s strained hospitals, snarled travel and raised the specter of widespread economic disruptions. The administration has fast-tracked Covid-19 treatments to hard-hit states and pledged emergency personnel to medical centers shorthanded by the waves of infection sweeping through their staffs. They’ve done it all while juggling immense political pressure from fellow Democrats to maintain some semblance of social normalcy lest the party be hit even further by pandemic fatigue among voters.

The new reality has further darkened the mood among White House aides already frustrated by the lack of progress toward ending a pandemic many initially believed could be dispatched within a year. It’s also accelerated the administration’s pivot toward preparing people to live with the virus indefinitely. In interviews, officials described the next few weeks as a triage operation focused on containing the reverberations of the surge well enough to avert breakdowns in essential services, mass school closures and overrun hospitals.

On Tuesday, Biden pleaded with Americans to get vaccinated and boosted to protect themselves against Omicron’s rise, arguing the U.S. is well-equipped to weather the crisis.

“We have the tools to protect people from severe illness from Omicron — if people choose to use the tools,” he said. “For God’s sake, please take advantage of what’s available.”

Yet even as the president sought to project calm, he conceded there was widespread confusion among Americans about the virus’s spread. And health officials inside and outside his administration privately acknowledge that there’s little new left for the federal government to do but hold on and hope the worst is over soon.

“We’re going to have another two-and-a-half, three weeks, maybe four weeks of this viral blizzard where we’ll see one challenge after another,” said Michael Osterholm, an epidemiologist at the University of Minnesota who advised the Biden transition. “There’s nothing at the federal level that’s going to change that.”

The Omicron variant hit the U.S. faster than anticipated, further exposing the shortcomings in the administration’s Covid strategy to date. A vaccination campaign at the center of the pandemic response has yet to win over tens of millions of skeptical Americans.

And despite directing tens of millions of dollars in funding to address the problem, the government still lacks the testing and tracing capabilities needed to closely track the virus’s spread — leaving officials scrambling to catch up as infections soar beyond the 1 million-per-day mark.

Well past the point of averting Omicron’s surge, top officials have instead tried to publicly calm fears while ramping up efforts to vaccinate more people and limiting the potential for catastrophic health and economic damage.

Privately, the administration has clung to data in foreign countries that suggest Omicron could burn itself out just as quickly as it arrived, meaning case counts could begin dropping off as early as February in early-hit parts of the country.

Health officials have also highlighted research showing the variant is less severe than its predecessors, making it less likely to drive a similarly astronomical spike in hospitalizations and deaths even as infections rise. In one particularly encouraging indication circulated within the administration, Covid-19 deaths in nursing homes have remained relatively level over the last several weeks.

Hoping those data points hold — and fearing that a return to unpopular lockdowns would be politically ruinous for Biden — the administration has shifted toward trying to blunt Omicron’s impact on everyday life and the economy rather than to completely contain it.

“The message is to get vaccinated, to get boosted and many of us have done so,” said one person familiar with the approach. “But folks who are not susceptible to that call, they’re going to remain resistant to it.”

The manage-not-contain approach has been visible across agencies. The Centers for Disease Control and Prevention in late December shortened its recommended isolation guidelines for Covid-positive people from 10 to five days provided the person leaving quarantine continues to mask. It was a move that two people with knowledge of the matter said they hoped would help avert the potential for staff shortages among fire, police and medical services.

Education Secretary Miguel Cardona, meanwhile, has ramped up his messaging in recent days that schools should remain open, arguing that state officials should do whatever possible to keep kids in classrooms.

The White House itself has largely backed off of publicly pressuring governors to implement specific policies like mask requirements — a shift that comes as blue state leaders have splintered over how to manage the pandemic, with some like Colorado Gov. Jared Polis declaring that the availability of vaccines means “the emergency is over.”

The administration has remained in daily contact with governors, advising them to follow CDC guidelines and briefing them on latest developments, officials said. They’ve spent much of the past few weeks ramping up efforts to support state-level responses, including sending emergency response teams to dozens of states and expanding testing and vaccination capacity.

Biden and his top aides have simultaneously called for Americans to get booster shots and wear masks where required, emphasizing the far greater danger Omicron poses to the unvaccinated. And after acknowledging that the speed of the surge caught them off guard and unprepared to handle the spike in demand for tests, the White House has since taken steps to build out its testing system and bolster access to treatments, including a pledge to buy and distribute 500 million free Covid-19 rapid tests and a doubling of its order of Pfizer’s antiviral pill.

Still, Biden has struggled to escape a Covid malaise that’s dragged down his approval ratings since the fall — a period complicated by messaging hiccups that have caused confusion and fueled criticism.

In the most recent episode, the CDC faced swift backlash for shortening its isolation guidelines without requiring a negative test, after top health officials had difficulty demonstrating the scientific evidence behind it. Administration officials have since insisted that the change is grounded in science, though two people with knowledge of the matter said the turbulent rollout touched off a fresh round of finger-pointing over who was responsible for the garbled messaging.

Democrats privately acknowledge that those missteps — along with the canceled flights that stranded thousands over the holiday — mean that even absent harsh restrictions and school shutdowns, Omicron’s spread could continue to undercut a midterm strategy once predicated on a clean defeat of the virus.

Fearful of what that portends for November, other Democrats have pushed for Biden to take an even more prominent role in messaging through the crisis. Nearly two years into the pandemic, “there is an enormous opportunity for the administration to make the grit, resilience and strength of the American people the central story of the pandemic,” said Simon Rosenberg, a Democratic strategist who has written extensively on the White House and politics of the pandemic.

“The president can use his powerful ability to connect with struggle and trauma to acknowledge our struggle with the virus and praise the American people’s can-do spirit in helping get to the other side of this thing,” Rosenberg said. “The story of the pandemic here in the U.S. is not about scientists, vaccines, the government — it is about all the courageous steps we’ve all taken every day to get ourselves and our families through an extraordinary collective trauma and disruptions.”